Private property, property rights and their protection are the cornerstone of a free and economically dynamic society. If trust and sanctity of private property is assured, people can conduct businesses easily and peacefully. And the economy can grow rather fast as sources of economic instability are reduced if not eliminated.

If, however, other people can say, “his car is also my car; his house is also our house” and comes to use other people’s car by force, or enter other people’s house by force and take away anything that he likes, then society can easily degenerate into chaos and unrest.

Private occasion is an event for selected and invited guests by the host and event organizer. Strangers and uninvited people are not supposed to join that event unless they were given belated explicit permission by the host. Otherwise they can be shooed away or be forcibly dragged outside if they persist on staying.

The conviction of Carlos Celdran by a Manila Court of “offending religious feelings” can be analyzed taking the perspective of protecting private property. A lawyer friend explained that “the central element of guilt or crime is location and occasion.”

The immediate reaction by many "netizens" to the lower court's decision, Celdran camp, was rather OA. The hashtag #freecarlosceldran was quickly used. Celdran was not imprisoned, since the decision was issued last January 27 or 28 until now. So how does one free a freely walking, freely moving person? 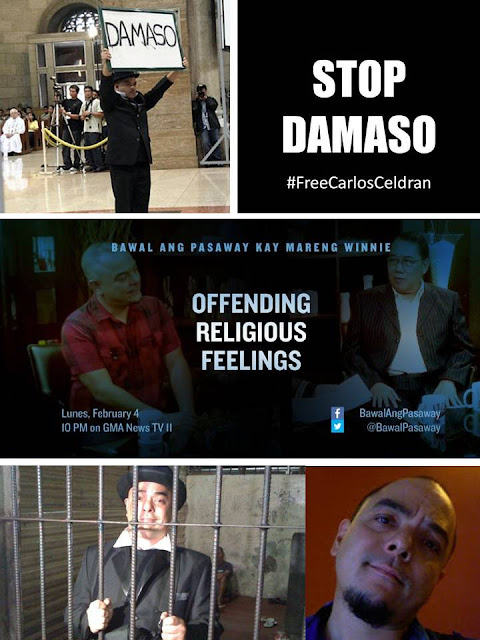 In a facebook wall of a friend Jim Libiran, who is also a friend of Carlos Celdran, Jim posted last January 30 about the latter’s case. I saw that Carlos himself joined the exchanges, so I posted this comment:

Hi Carlos, I have a question. Pwede naman gawin yan, hurl posters like DAMASO, Bishop Satanas, Obispo bobo, whatever. It's part of freedom of expression, so it's not being debated. The debate centered on what my lawyer friend called "location or occasion" in establishing guilt or crime. If you did it in Liwasan, Luneta, Plaza Miranda, Edsa, facebook, etc., I think there would be no legal debates. But you chose a specific location and occasion, the cathedral with an on-going religious activity. I assume you already knew you were courting some trouble by choosing such location and occasion, and you exactly got it. Don't you think you just got what you were asking for?

Carlos was kind enough to reply after a few minutes. He said that what he did was not just for fun, but to bring attention to the RH bill then and the CBCP power abuse. When the bill was passed into a law, he said that he exactly got what he wanted.

I was referring to the legal case filed against you that was upheld by a Manila court, not the RH law. The issue now is about your conviction by that court, not the RH bill passed by Congress. From your reply, it is clear that you justify, no remorse, of what you did -- entering a private location (it's not a public place like Luneta or Quiapo Plaza) with private occasion (it's not a rally or street demo) uninvited in pursuit of your political advocacy. Some individuals, I think it was not the CBCP itself who filed the case, also thought it is their freedom of expression to haul you to court. The judge is the referee to decide whether the case filed by those individuals should be upheld or thrown away, and the judge ruled in favor of upholding it and hence, your conviction. This is what I meant -- you asked for trouble that day, you got it. Don't you think you deserve it?

Carlos replied that he and nobody in the Philippines deserves that law nor the hypocritical religion. So I posted another comment:

So you can enter a private location with a private occasion uninvited and make a scene, the people attending that activity in Manila Cathedral deserve it. But when some of the people there think they have the freedom of expression to bring you to court for your action, it is not justified? I see double standard and absence of fairness in that statement. Earlier, I commented also in Jim's wall posting when he said that "If Celdran did the protest OUTSIDE of the Church, say in Plaza Roma, the whole symbolic action will miss the point. It was bringing politics into a church to protest, symbolically, Church meddling in politics."

Let me restate my reply to him and address this to you now. Is it okey with you if someone will enter your office or your house (both are private properties, not public place), hold a placard denouncing you or your work, because it is their freedom of expression anyway. And you are not supposed to drag that person outside your office or house, and neither you are supposed to sue him. Is that Okey with you?

Asking that question because it is not ok with me, Thanks again.

He did not directly reply to it, only posted an article about him from a local online news. While I also did not support the RH bill then, now a law, I did not use or support the Church arguments as I have my own. My main opposition to the RH bill was that it is another legislation to further expand government, expand public spending, the various bureaucracies and the public debt. More RH services can be done via more private sector and civil society volunteerism, on top of the regular activities and spending of the Department of Health and various local government units.

So my support of the conviction ruling by the Manila Court is not exactly a sympathy with the CBCP and the Catholic Church. It is more of upholding private property and the privacy of individuals in a private occasion.

Manila Cathedral is private property of the church, not by the government or by any corporation,  NGO or individual. Although Celdran did not say anything while holding the placard “DAMASO” it was still an intrusion as it was an uninvited or unsolicited action. And when he was forcibly escorted outside so he can stop his drama, he started shouting and hence, created further unnecessary scene and disturbance to the church goers.

There are several lessons that we can learn from this case.

One, tolerance means respect for other people's belief, biases and dogma -- Catholic dogma, Islamic dogma, Buddhist dogma, cultural minorities’ dogma, etc. Do not smear their practices in their private places and private events. Bold and daring people may do it but they should face the consequences later.

Two, dragging other issues and complaints against the Church like pedophile priests and corrupt church leaders are immaterial to the current debate. The issue is whether the Court’s conviction of Celdran for his action that day is justified or not.