From Pork Barrel to Parliamentary Dumdum

The tirade and personal attacks of the Orion Dumdum camp continues. See, PNoy Government, Pork Barrel and Parliamentarism.  I let them open their mouth more, because the more they do, the more they expose their true personality. They are among the “saviours” of this country against the corrupt and hypocrite politicians, right?

Some are asking why I am posting an exchange in a private fb group in my blog. Simple, it concerns me. They are directly attacking me, and I have two choices. One is rebut them point by point, or simply publicize their “assessment” of me. 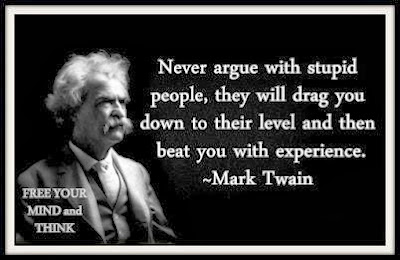 Option one is not practical because it’s a gang up and they use foul language and I do not want to stoop to their style. I remember this warning from Mark Twain:

Notice that they have shifted the topic from pork barrel to Pnoy administration, to me directly. So again, see their language, see their attitudes, in their own words.

Vincent Blas So suddenly, Nonoy Oplas supports the impeachment of the President, and doesn’t care if the Philippines is Presidential or becomes Parliamentary

Orion Pérez D. Fair enough, Nonoy Oplas --- in those posts, sure, you didn't criticize us and attacked Noynoy's statement...

You see, Oplas, the problem is that you are a fanatic extremist.

You see, Oplas, the problem is that you want us to do things 100% the same way you want them to be done. You are an absolutist, and you want things done instantaneously.

We -- CoRRECT and FEF -- however, know that if we are to work within a democratic framework, we need to do things STEP-BY-STEP.

Step number 1 is to first bring in Foreign Direct Investments in order to create jobs for our people so that we can solve the problem of too much unemployment, idleness and despair that leads to high crime rates and the OFW problem which in turn creates more social problems.,,,

It has been proven that Presidential Systems CANNOT induce major reforms unlike Parliamentary Systems.

Remember Singapore? They went from Third World to First.

Look at Malaysia. They're not First World yet, but they are getting there. And they're way way way better than the Philippines is economically because Mahathir reformed their society.

Both Singapore and Malaysia have very low income-tax rates. And they're PARLIAMENTARY.

In fact, when CHILE needed to reform itself, it didn't do its reforms through DEMOCRATIC MEANS.

It had to do through a military dictatorship under Augusto Pinochet with advice from the Chicago Boys.,,,

Parliamentary Systems have a structure that allows for fundamental reforms to be done in society to happen WITHOUT RESORTING TO MILITARY DICTATORSHIP.

Look at Lee Kuan Yew. Did he need to resort to dictatorship? No. In the parliamentary system that Singapore uses, Lee Kuan Yew was able to LIBERALIZE THEIR ECONOMY and make themselves open to FDI as well as create safeguards against corruption and crime that made them even more attractive to INVESTORS - both local and foreign.

Part of the problem, Oplas, is that you and your acolyte Froi act like those Tea Party fanatics...

Instead of supporting the right-of-center Republican Party, the Tea Party HIJACKED IT by bullying the Republicans into getting the extremists into their line-ups.

Worse, the Tea Party extremists even went to the point of BULLYING Republicans who were looking to do compromise deals with the Democrats.

It's so very Froi-and-Oplas, honestly...

Because the OPLAS-and-FROI style is that you guys don't actively attack the Communists like Bayan Muna and the CPP-NDF-NPA...

Instead, you reserve your vitriol against other Free Market advocacy groups like FEF and CoRRECT who are more normal and "moderate" in our approach just because we are not as EXTREMIST as you are.

Instead of fighting the Communists, you (Oplas) and Froi prefer to attack CoRRECT and call us "STATISTS" and "WELFARISTS" even if we have NEVER MENTIONED ANYTHING SUPPORTING Statism or Welfare!

The problem you have with us is that that we are moderates who are looking to promote the cause within a democratic framework....

Here's the thing I don't get with you, Oplas...

Whenever you get cornered and you lose in a debate (EVEN ONE THAT IS PRIVATE like this one --- no one outside this group can see you getting clobbered), you get pikon and then you suddenly go out of your way to create a defamatory blogpost out to destroy other people in the open Internet.

Were you the guy who taught Froi to resort to cyberbullying?

Or did you learn it from Froi?

Because honestly, Oplas, you really are looking like a spoiled brat.

You started a lot of fights with CoRRECT and then when we step in to defend ourselves and in the process WHACK the hell out of you (because we have the facts on our side and you don't), you can't take responsibility for the conflict that YOU started.

What is wrong with you, Oplas?

Nonoy Oplas here it is, enjoy,http://funwithgovernment.blogspot.hk/...

So... Will you admit too that you were wrong in attacking me and CoRRECT just because pushing for the Parliamentary System is part of our Constitutional Reform agenda?

Will you admit that you were wrong in maliciously misrepresenting me and CoRRECT as being "statist?"

Will you admit that your demand that CoRRECT and I push for an aggressive "minimal government" agenda is actually OUT OF SCOPE for our movement because CoRRECT is STRICTLY a Constitutional Reform advocacy and unfortunately, many of the stuff you want us to add into our push are NOT included in the Constitution and are instead dealt with more in LEGISLATION and judicial reform?...

Nigel Pope Noynoy, why would publicly post on your blog that you're a noytard?

Do you really want everyone to know you are an Aquino supporter?

Or is this your way of making sure your new political party gets included on the pork lists...?

Vincent Blas Is it dead? *pokes with a stick*

Trevor Llewellyn Evans I think that Noynog Epal is actually a journalist that learned his craft at Fox. What he does is have conversations and debates with people in private, then when the story angle isn't going his way or they way he assumed it would, he broadcasts the "its off the record" debates on the Fox News Channel, but carefully edits the story to fit his predetermined conclusion, by trying to defame or discredit the people he spoke to who contradict or shoot holes in his hypotheses. What he basically does is spin the truth to his "believers" to try and sooth his fragile ego and to gain sympathy for his poorly thought out story line. Just Pathetic. If you can't beat them in a logical debate, destroy their credibility...maybe he should have been a car chasing lawyer.

Orion Pérez D. But honestly, the biggest problem of Nonoy Oplasis that he spends more time picking fights with fellow Free Market and Economic Liberalization advocates, hateblogging against them, calling them names like "statist" or what-not, INSTEAD OF forming a formidable alliance with them to fight Pinoy Commies like the CPP-NPA-NDF or Bayan Muna or other Leftard groups like NEPA (National Economic Protectionism Association) who are out to keep JOBS out.

Oplas... Honestly... What drives you to pick fights with people whom you are supposed to be on the same side with regarding Free Markets and Capitalism? Why do you prefer to waste time fighting against us fellow pro-Economic Liberalization advocates over irrelevant minutiae when better time would be spent fighting against the Commies?

What's with you? Are you actually a Closet Commie yourself that you actually want to SABOTAGE us as we advocate for economic liberalization and other important reforms that could help make the Philippines zoom up to First World status?
Posted by Bienvenido Oplas Jr at 6:39 PM

yeah, orion is a bit extreme. but i do wonder why you wont support parliamentarism IF you believe it advances freedom (even minimally).