The EFN Asia 2013 Conference ended yesterday, another great event by the biggest network of free market or at least independent think tanks and academic scholars in Asia. This is my article yesterday at the new EFN website.
------------ 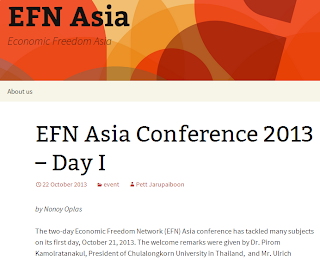 The two-day Economic Freedom Network (EFN) Asia conference has tackled many subjects on its first day, October 21, 2013. The welcome remarks were given by Dr. Pirom Kamolratanakul, President of Chulalongkorn University in Thailand,  and Mr. Ulrich Niemann, Director of the Division of International Politics, Friedrich Naumann Foundation for Freedom (FNF). 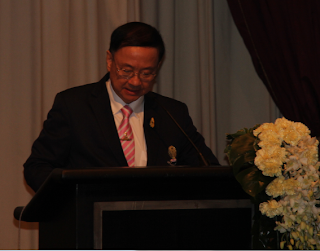 Dr. Kamolratanakul said that Thailand has been growing slower and 42 percent of the working population are stuck in agriculture. The country needs a transparent and efficient public sector and good governance to build the middle class, and must emphasize productivity growth and more investment, especially in infrastructure and education. 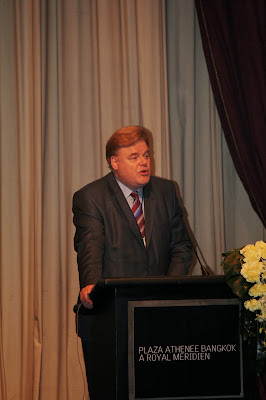 Dr. Niemann emphasized the importance of Asia and economic freedom in the world, but developing Asia still has a long way to go to expand economic freedom. Some countries are trapped from becoming advanced and high income countries. Certain vested interests challenge and stall further economic reform. Political reform is also needed and ideas of classical liberalism have to be reintroduced.

Mr. Sy stressed that with rising modernity in technology, communications should be geared towards shared value. Integrity in government is needed, based on honesty of both individuals and institutions. Good governance can build middle class, aided by economic freedom and simple, transparent rules. The Philippines has a big population that also has a big diaspora. Its middle class can go up or down the economic ladder and they are concerned with regulations and attaining economic freedom, while the poor are less concerned about these.  Different countries have different contexts and the middle income trap is defined by those contexts.

Mr. Aung asked how far do we Asians want to go, fast like a big bang, or how gradual. The ASEAN Economic Community that will materialize by 2015 looks ambitious. AFTA is sometimes called Agree First, Talk After, especially by the ASEAN 6 – Brunei, Indonesia, Malaysia, Philippines, Singapore and Thailand. Do we plan to take the EU path, which is a long and evolving process? We may be excited but not ready for it, especially Myanmar which is a late comer. With all the economic optimism in the region, there is a need for strong political will to push certain programs and reforms. 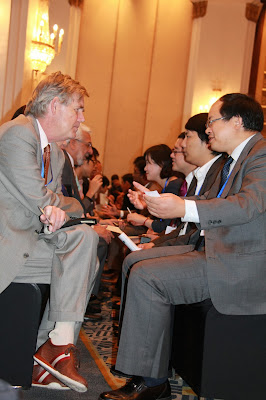 After the two keynote speeches, a speed dating was held for all participants where they talked one on one for two minutes, introducing themselves, why they attend the conference and so on. The format was very useful as it provided an excellent opportunity for networking.

Panel 1 of the conference was defining the term “middle income trap”, the myth and realities about the concept. The two speakers were Dr. Laveesh Bhandari, Director of Indicus Analytics Pty. Ltd. India, and Dr. Fred McMahon, Fellow and holder of the Dr. Michael Walker Research Chair in Economic Freedom, Fraser Institute, Canada.

Dr. Bhandari emphasized that jargons on economics and governance must not be confused with reality on the ground and  demands for practical considerations, so that levels of economic development and economic freedom can produce the needed outcomes.

Dr. McMahon showed various indicators that contribute to high income of some countries, and concluded that economic freedom or the lack of it explains a great deal of middle income trap if not everything about it. Rule of law complements economic freedom.

Over lunch, Dr. Kriengsak Chareonwongsak, President of the Institute of Future Studies for Development, made a presentation on “Thailand’s Titles Projects from the Perspective of Economic Freedom.” He underlined the important role of property rights protection as the cornerstone of capitalism and economic freedom. He showed charts indicating that many private lands are not properly titled and such ambiguity in ownership prevents the owners, the poor especially, from developing those lands to high productivity use and hence, contributes to poverty.

The panel 2 discussion was about surveying the trend of middle income trap. The two speakers were Dr. Bibek Debroy, Professor at the Center for Policy Research in India, and Dr. Suthiphand Chirathivat, Chairman of the Chula Global Network in Thailand. The panel moderator was Dr. Chayodom Sabhasri, Dean of the Faculty of Economics, Chulalongkorn University.

Dr. Chirathivat underlined that connectivity is good for economic integration and as international pressure for national governments to integrate with, and learn from, each other, how to avoid middle income trap. Countries cannot rely on cheap labor as pathway to high growth. The average per capita GDP in ASEAN is projected to rise five percent a year from 2010 to 2030, there is a need to move to high skills industries. .

The panel 3 discussion had a particular focus on four countries from four speakers. It was moderated by Dr. Kim Chung ho, Professor at Yonsei University and also founder of a new think tank in S. Korea, the Freedom Factory Ltd. 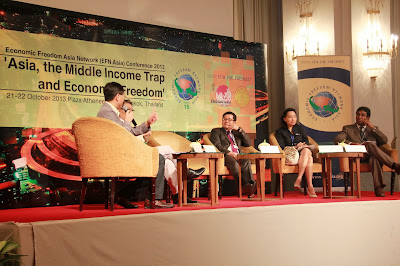 Assistant Secretary of Philippines DOJ, Geronimo Sy, gave special mention of having a competition policy in each country to enforce rules equally among players, and avoid “regulatory capture” by some regulated players.

Dr. Choi Byung-il, President of the Korea Economic Research Institute (KERI) said that populism is a zero-sum game of distributive politics, rent seeking activities can become rampant, if politics will trump over economics. Economic freedom and prosperity are highly correlated. In the case of S. Korea, growth was fast until the 80s. By 1987 onwards, public demand for more social equity, more labor rights and other entitlements has increased. The weakening global orientation plus rising populism resulted in more inward-looking attitude and protectionism among the people.

Dr. Deunden Nikomborirak, Research Director of Thailand Development Research Institute (TDRI) presented a paper on “Middle income trap and the Thai service sector”. Thai sectors are dominated by large conglomerates and reform in services sector is required as 44 percent of the labor force is working in this sector. Labor productivity is stagnant, just half of productivity in manufacturing. FDI in ASEAN flows mainly into the service sector but in Thailand, FDI goes mainly to manufacturing, and Singapore is ASEAN “FDI gate keeper” as it is the most liberal, most economically free country in the region. With the ASEAN Economic Community coming soon, Thailand will get “second hand” FDI after Singapore.

Dr. Harsha De Silva, Member of Parliament of Sri Lanka, agonized that prosperity in his country remains an illusion, that it is facing not only a middle income trap but also debt trap. Government investment priorities are questionable and the public sector, civilian and military, keeps expanding, into more commercial businesses.

Another speed dating was held among all the participants including speakers. This time, the focus was on participants’ reflections of the various presentations in panels 2 and 3.