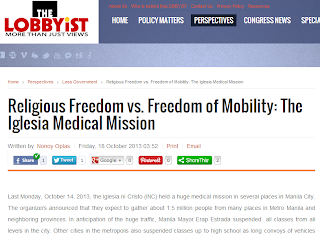 Last Monday, October 14, 2013, the Iglesia ni Cristo (INC) held a huge medical mission in several places in Manila City. The organizers announced that they expect to gather about 1.5 million people from many places in Metro Manila and neighboring provinces. In anticipation of the huge traffic, Manila Mayor Erap Estrada suspended  all classes from all levels in the city. Other cities in the metropolis also suspended classes up to high school as long convoys of vehicles from many places will be passing by their cities on their way to Manila.

This incident has angered many Filipinos, especially the non-Iglesia members. Hundreds of thousands of students from pre-school to tertiary were deprived of one day of schooling. Those with official and personal trips to and around Manila City suffered super heavy traffic, which started at dawn that day. Many people started queuing at designated places at dawn and hence, travelled to the place at midnight and early morning the previous day. The big volume of buses and jeepneys that ferried the people from different cities and provinces parked at no parking areas, further worsening an already bad traffic situation.

An Iglesia member reacted to Bong’s comment, said that there is a need “to uphold the core value of humanity which is respect.”

I replied to this guy and asked if the INC also respected the right to mobility of other people? No. The INC threw its weight around. They have INC hospitals, churches, schools and so on where they can conduct such medical mission, daily if they want. Luneta and other big open spaces are also alternative venues. Not a bit, INC chose the heavily congested places of Manila, on a weekday.

If the INC wanted respect and understanding from the inconvenienced public, they should have anticipated those problems as it is not the first or second time that their big gatherings cause heavy traffic congestions and trip delays for many other people.

The INC guy replied that “there was no intent to disrespect anyone in the outreach. The argument of respect begets respect clearly does not apply. Why on a Monday? Because Weekends are our days of worship as well as Wed and Thursday…. INC helped thousands of families in Manila. I hope that while you contemplate on the inconvenience, you also realize the medical and relief help we have extended to these families.”

The alibi does not hold water. When you bring a million people or more in a small piece of land like Manila City in one day, the freedom of mobility of other people is immediately disrespected. The Supreme Court, Court of Appeals, lower courts in Manila have all suspended proceedings by afternoon of that day. Classes were suspended whole day. Religious and humanitarian freedom by INC has trumped all other freedoms -- freedom of fair court trial, freedom of education, freedom of mobility, freedom of commerce, others -- these were all rendered secondary or unnecessary that day.

Other INC members may feel that they are being discriminated against because such "rants" are not heard when the Catholics also hold religious-related activities like the Feast of Nazarene and Christmas holidays, where heavy traffic congestion is also experienced.

This is not a valid observation. The Catholic Nazarene Feast and its heavy traffic is confined around Quiapo area only and does not affect the outer rings and streets of Manila City, and definitely does not affect other neighboring cities. The Christmas season is feast and business season. Even atheists and agnostics enjoy the holidays, there are many reunions, partying, perhaps 99 percent of which are not related to religion.

The various city governments in Metro Manila M are also to blame for suspending classes. It is not a far out possibility that there is implicit pressure from INC that if those Mayors do not close schools in their areas, the INC may not support them in the 2016 elections. Many local and national politicians are afraid to antagonize a solid-voting INC bloc.

But even if the other city governments did not close schools that day, the fact that INC brought hundreds of thousands of its followers from northern, central and southern Luzon to Manila City, on a weekday, is already bad. INC has thrown its political weight around.

This should be another warning signal for the rest of Philippine electorates. A big religious bloc can throw its weight around and cause huge public inconvenience for one day or more, when its purported  goal, to conduct medical mission, can be done in other venues, or be phased into several days on smaller venues.