Mining 36: Tax that can Wipe Out All PH Public Debt 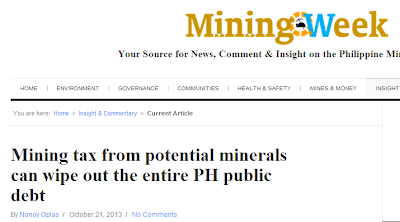 The mining industry is a very useful sector because many of the things that humanity needs in modern life come from mining, like cellphones, tv, cars, buses, electricity, appliances and so on. Yet mining is also highly criticized if not demonized for the various environmental damages attributed to it, real or imaginary.

The Extractive Industries Transparency Initiative (EITI) is an international voluntary system among governments and big mining worlds in many countries that help clear this issue of whether mining indeed deserves to be demonized or be protected, at least on the taxation and output transparency aspect. Its focus is on making revenue payment and collections from the extractive sectors like oil, gas and mining, become more transparent to the public. In the process, this enhances government revenues.

The EITI International Secretariat and the World Bank Washington office jointly sponsored the “Conference on the Adoption of the 2013 EITI Standards” last September 27, 2013 at Crowne Plaza in Ortigas. Among the speakers was Dr. Elmer Billedo, Assistant Director at the Mines and Geosciences Bureau (MGB) of the Department of Environment. This is one of the slides he showed. 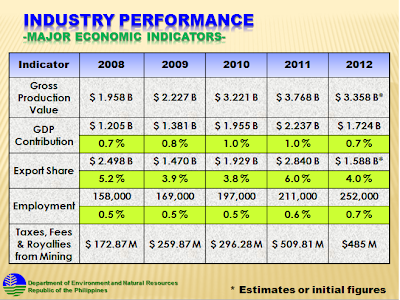 Many sectors look down or understate the contribution of mining in the economy, as shown by its low share of only 0.7 to 1.0 percent of the gross domestic product (GDP) and only 0.5 to 0.7 percent of total employment in the country. With such a low share, then the country can possibly afford to shut down all mining companies and give the displaced workers alternative work elsewhere, particular in the agriculture, industry and service sectors.

This analysis is wrong. No mining raw materials and products means little or no industrial output as the iron, nickel, copper, chromite and other metallic products are the raw materials to produce various machines, steel and construction materials, cell phones and various electronic products and appliances. If these manufactured products are not available or present at very small amount and very high prices, then construction, transportation, telecommunications, trading and other service sub-sectors will have little or no output.

The analogy may also look like this. Raw and live chicken production is counted in the agriculture sector. Once it becomes litson manok or chicken adobo or chicken curry in food shops, it is counted under the service sector. If it is transformed into chicken cubes or chicken fillet or noodles, it is counted in the manufacturing and industry sector. Valuation in the industry and service sectors is a lot higher than those in the agriculture sector. A P115 per kilo live chicken raised for a month in the chicken farm can become P230 or higher as litson manok or a doubling of gross value after just a few hours.

Thus, raw, lower value mineral products actually have huge multiplier effects in the economy, from the agriculture to industry to service sectors. Even a 1 percent mining share of GDP can enable all the other  sectors to have high share of GDP.

Below is a breakdown of output by the three producing sectors, namely LSMM, SSM and LNMM. Data from the MGB

Note that those taxes and fees generally come from LSMM as the firms here are highly regulated and monitored by the BIR-DOF, MGB-DENR and local government units (LGUs). Such taxes, fees and royalties comprise between 43 to 60 percent of the LSMM’s net revenues.

The Philippines has been ranked by the US Geological Survey as being the biggest nickel producer worldwide. The estimated nickel reserves though is not very big compared to those in Australia, Brazil and Russia. 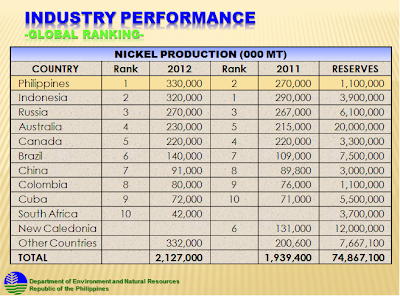 During the open forum, I suggested that the BIR-DOF, MGB-DENR and LGUs-DILG should make data on  mining taxes, fees and royalties become more easily available online. Lack of updated and official data makes the anti-mining sentiment and biases become more convoluted. For instance, even known economist Ma’am Winnie Monsod is misinformed to insist that the government collects only two percent excise tax from LSMM which she says is peanuts, and proposed the Malampaya natural gas revenue sharing arrangement where the government gets 60 percent of the net revenues. The IMF says that if the Average Effective Tax Rate (AETR) formula is applied, LSMM in the country is paying up to 60 percent of their net revenues to the government, both local and national.

There is huge industrial potential for the country given our high mineral deposit and wealth. If those companies and investors are following existing environmental regulations, paying various taxes, fees and royalties, spending extra for the community via social development management program (SDMP), and creating lots of direct, indirect and auxiliary jobs to the people especially in rural municipalities and provinces, then they should not be demonized by the public.

With a $0.9 to 1.0 trillion value of mineral potentials, with potential net revenues of $400 billion (about 60 percent of gross production goes to operating costs like personnel salaries, depreciation of expensive capital equipment, fuel and electricity, etc.), and if government will collect about half of that in the form of taxes, fees and royalties, that is a whooping $200 billion revenues or P8.6 trillion at P43/$ exchange rate.


This amount can practically wipe out the total public debt of P5.45 trillion as of June 2013. It is a substantial or giant revenue that the government and the rest of society should recognize.
----------

This is foolish Keynesian economics. 5,000 years of recorded history proves that adding more taxes never makes governments financially responsible, but just the opposite: it leads to financial irresponsibility and economic meddling by government, and more debt and poverty for you.

Anyone struggling to support a family can tell you that you can't manage a household budget by borrowing money and making your neighbor pay it back. A government trying to tax itself into prosperity is like a man standing in a bucket while trying to pull himself up by the handle. It doesn't work. It can't work because wealth is created only through capitalism in the free market, and taxes don't create wealth; they merely plunder it from the economy taking it away from businesses, employees, and households. The only ones who benefit from more taxes are the government bureaucrats and their cronies that plunder your wealth in the name of socialism.

Taxes don't create wealth, they merely plunder wealth from those who own it, and pass it to government bureaucrats and their cronies: Taxation is theft, plain and simple. Taxes imposed on miners will be handled by those miners as a cost of doing business, meaning that they will be forced to pass on the cost of taxation (government plunder) to the consumers (that's you!). This means you end up paying more for everything you buy; you pay the hidden tax on the products you buy because the cost of that government plunder is naturally passed on to you by the businesses. Anyone who owns a business can tell you that's the way it really works.

The author claims that "The Extractive Industries Transparency Initiative (EITI) is an international voluntary system..." but if that were true it why does it need the force of law to make miners "volunteer"? And why have a mandatory tax if the "initiative" is "voluntary"?

He goes on to say "Its focus is on making revenue payment and collections from the extractive sectors like oil, gas and mining, become more transparent to the public. In the process, this enhances government revenues." What he really means is that by visibly taxing miners the governments manage to fool the public into accepting an indirect tax on all goods provided by the mining industry, while tricking them into thinking someone else other than the consumer ultimately pays the tax, but that simply isn't true. It is blatant dishonesty - typical of parasitic governments unable or unwilling to operate within a fixed budget.

The purpose of a free republic is not to find yet another way to finance parasitic government by increasing the plundering (taxing) of the people, but to take away the government's totalitarian power to borrow money that the people must struggle to repay through more and more, and ever increasing taxes and inflation.

The way to "Wipe Out All PH Public Debt" is to take away the power of government to borrow and force you to repay a debt which you did not contract, NOT to plunder and force consumers to pay more for goods and services!