Overseas employment, do the positives outweigh the negatives?

A friend asked that question in facebook and my quick answer is Yes. The positives outweigh the negatives. Overseas employment is a voluntary and private contract between the foreign employers and Filipino employees. People have the option to stay home and look for jobs here, but they opted to go outside because the perceived benefits are larger than the costs. If our constitution, economic and bureaucratic policies are friendly to foreign investments and entrepreneurship in general, many of those foreign employers would have been here, employing Filipinos in the Philippines, not abroad, and subjected to Philippine laws.

The World Bank released its Migration and Development Brief 21 dated October 02, 2013, a 29-pages long paper. I am posting some figures from that paper here. 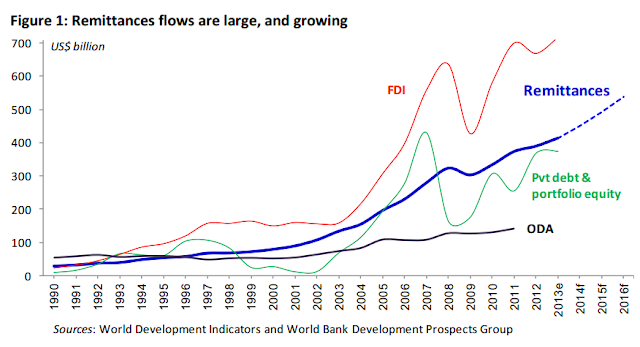 Going back to Econ 11 (elementary econ) or Econ 102 (micro econ), when some workers leave and work abroad, the domestic labor supply curve shifts to the left and if domestic labor demand remains the same, that raises the equilibrium wage rate, say from P300 to P350. The local job seekers will have fewer competition from other Filipino job seekers as they go abroad. It should be considered as a plus to society.

Then many of those OFWs are not exactly a "brain drain". After their contract ends, or renewed contract ends, many of them come back, often not as ordinary workers but as micro or small entrepreneurs  having their own jeepney or taxi or sari sari store, or rice thresher machine in the barrios. They then create local jobs aside from hiring themselves. There are many other plus for people who work abroad. If we have to demonize anything or anyone, it is the protectionist Constitution, the tax-hungry government and the various business bureaucracies. Those foreigners abroad may consider put up their company here and hire Filipinos here but they don't, so Filipinos seek work abroad.

Does going abroad raise unemployment? No. If the labor demand curve stays at the same level while labor supply curve shifts to the left, there is no corresponding rise in unemployment while equilibrium wage rises. It is when labor demand curve also shifts leftwards (say due to endless government business bureaucracies, local and national, some entrepreneurs are closing or at least not expanding while population rises) that unemployment can increase and the equilibrium wage decreases. 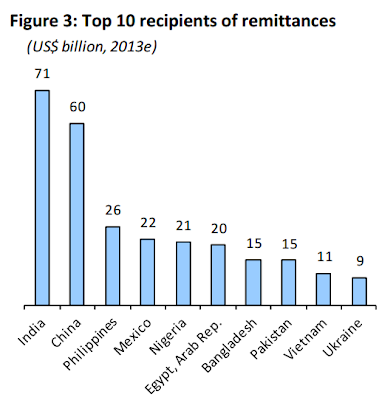 If many Filipinos cannot accumulate enough savings to become start up entrepreneurs someday if they will remain working here, and working abroad can provide that opportunity, then they will work abroad. It's a plus thing.

In the factor price equilibrium (FPE) theorem, when factors of production (capital, labor, technology) are freely mobile worldwide, over the long term, factor prices (interest rates, wages, tech costs and patent, etc.) will tend to equalize. Not worldwide immediately, but at least over a region.

A friend noted that there is "7 percent unemployment and roughly 21 percent underemployment happening side-by-side with growth in OFWs and their remittances over the years, and almost 30 percent poverty rate."

Precisely that the job creation capacity of the local economy is limited, that overseas employment helps reduce more unemployment and underemployment here. Many countries abroad are labor deficient, they need migrant workers like Filipinos. Labor demand meets labor supply in a voluntary contract, and that is how the OFWs phenomenon continues, not because of any government policy to promote or discourage it. The role of the government via POEA, OWWA other agencies, is mainly to collect more fees from Filipinos before they fly out. so be it. 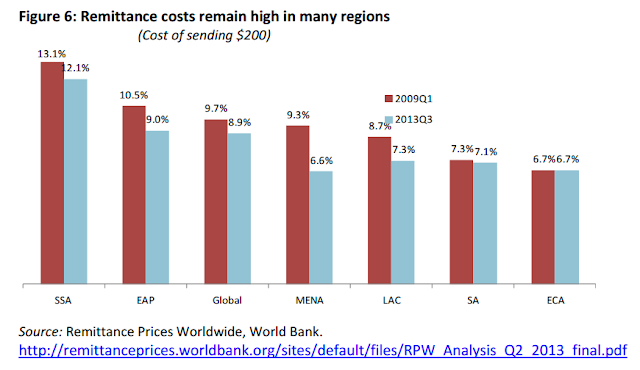 A friend says he has high respect for the officials of the 3 institutions I mentioned above. No problem with that, but leadership and institutions are two different things. You put angels to a government office that says, "You cannot start a barber shop, you cannot cut anyone's hair unless you produce these documents and permits 1... 20. No bribes or shortcuts will be allowed whatsoever." And that's one way to transform angels into devils.