Pol. Ideology 52: What is the Main Purpose of Government?

* This is my article today in thelobbyist.biz. Quotes below are not part of the original article, I just added them here.
------------ 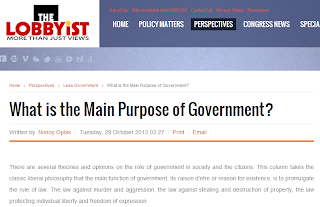 There are several theories and opinions on the role of government in society and the citizens. This column takes the classic liberal philosophy that the main function of government, its raison d'etre or reason for existence, is to promulgate the rule of law. The law against murder and aggression, the law against stealing and destruction of property, the law protecting individual liberty and freedom of expression.

When people get more private security to protect themselves, their houses and offices, schools and shops, from aggressors and killers, thieves and vandals, then there is clear and widespread government failure. This article discusses that more people now in the Philippines are hiring private security guards in their homes.

Securing peace and order in society is supposedly a government function and responsibility, especially in dealing with organized and armed criminals, or sophisticated ponzi schemes that rob hundreds or thousands of people big time. That is why there is a huge phalanx of armed policemen, investigators and  soldiers. But how come that peace and order is mainly implemented by private security agencies? That peace and order has been implicitly privatized when the budget and personnel of those armed agencies keep rising?

If there is widespread government failure in maintaining peace and order, in protecting lives and private properties, why has government expanded into many non-core, non-essential functions? Like running banks and casinos, universities and specialty hospitals, monopolizing pension and social security, extending forever, no timetable welfare and subsidies.

The government should be terribly ashamed of this situation, especially when people have to hire private guards to protect their homes, on top of having private guards protecting the village gates. By extension, the NGOs and civil society leaders, media people, foreign aid, etc. who demand ever-expanding government bureaucracies, subsidies and taxes when there is clear and explicit government failure in promulgating the rule of law, should  rethink their advocacies.

Of what value to the poor that they get endless, forever, no timetable subsidies in healthcare, education, agriculture credit and seeds, condoms, etc., but their kids can be abducted and even raped easily, their small investments like a cow or tractor or tricycle can be stolen somewhere, their small plot of land can be land grabbed by some politically influential people?

Where there is peace and order, where the government is truly doing its work in protecting the citizens' right to life, right to private property, right to liberty, enforcing contracts, people will become productive. They can work from morning till midnight if they want, knowing that their family and house are secure. Where people are hard working and have peace of mind that their business contracts, big or small, are respected and enforced, plus civil society support, they can get out of poverty on their own.

A friend, Steve Cutler, suggested that since private guards and drivers and so on are dirt cheap in the Philippines for many rich people, the affluent acquire them as a way of ensuring people know how important and rich they are. There may well be some kind of "threat" but it can also be a fashion accessory.

That angle is highly possible. But having private guards in many shops, schools, cash collections by gas stations, convenience stores, etc. transported by armed vans, speaks of something, that there is grave government failure in tracking and going after the real criminals in society, if not suspicion that some members of government armed forces themselves are actively involved in criminality, like protecting drug lords and organized hold uppers.

Another friend posted this quote from Benjamin Constant (1767-1830), Swiss-born French politician and writer who argued that liberty was essential to moral development.

"Every time the government attempts to handle our affairs, it costs more and the results are worse than if we had handled them ourselves."

This belief is widespread among liberty-oriented people especially the anarchists. Minarchists give government some favor by recognizing certain role for it, ike enforcing the rule of law and contracts between and among people through the justice system, the police and a few other agencies. When government becomes inefficient and wasteful in almost anything it dips its hands on, government credibility as an institution to protect law and order keeps dipping.

Steve Cutler made another comment, that “the guards that work in the vast majority of establishments give a false sense of security, which is an unrecognized issue. They are there only to open doors, clean tables, and so on. Or to raise a bar to allow vehicles to pass through. But they will not really protect people. You're on your own if shots start to fly. Protecting you is not part of the contract. They are there only/only to protect the property of the contracting party...the guy who pays the contract. Unless that's you, don't expect any help from a guard.”

The private guards function somehow as deterrent to petty criminals like shoplifters who may have guns to use when cornered. Such deterrence function helps reduce the possibility of shots flying inside malls. The guards with long firearms in vans are deterrent to organized criminals.

These criminals, petty or organized, can be tracked down at the barangay or street levels, if the LGUs and the police are doing their work seriously, and if government is not distracted from providing so many non-core functions.