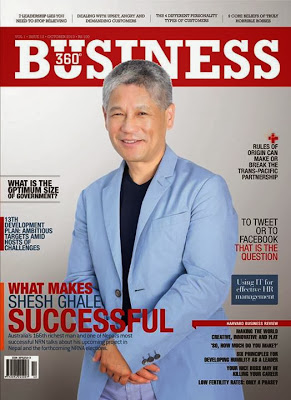 Most of the discontent and disharmony of people within and among countries around the world can be traced to the size and degree of invention and regulations of government. Some people want government to be as extensive as possible, approaching a socialist economy, some want no government at all.

Too much government means too many taxes and fees to sustain a big army of government officials and personnel, and also sustain an enormous number of people who will be waiting for various subsidies and welfare that the government will give or promise. Citizens will also have to comply with too many regulations and restrictions.

Thus, many people want a certain government size that is neither too big nor too small and allow government to perform its main functions, especially those related to protecting the citizens’ right to life against murderers and aggressors, right to private property against thieves and destroyers of property, and right to liberty against bullies and dictators.

The question of what is an optimal, most efficient, midway between maximum and minimum government size, has been discussed possibly since government was first invented. 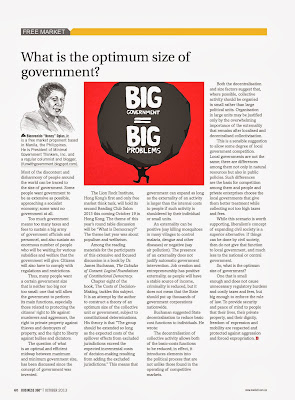 Among the reading materials for the participants of this extensive and focused discussion is a book by Dr. James Buchanan, The Calculus of Consent: Logical Foundations of Constitutional Democracy [1962].

Chapter eight of the book, “The Costs of Decision-Making”, tackles this subject. It is an attempt by the author to construct a theory of an optimum size of the collective unit or government, subject to constitutional determinations. His theory is that “The group should be extended so long as the expected costs of the spillover effects from excluded jurisdictions exceed the expected incremental costs of decision-making resulting from adding the excluded jurisdictions.”

This means that government can expand as long as the externality of an activity is larger than the internal costs to people if such activity is shouldered by their individual or small units.

An externality can be positive (say killing mosquitoes in many villages to control malaria, dengue and other diseases) or negative (say air pollution). The presence of an externality does not justify automatic government intervention. Job creation and entrepreneurship has positive externality as people will have stable source of income, criminality is reduced, but it does not mean that the State should put up thousands of government corporations nationwide.

The decentralization of collective activity allows both of the basic-costs functions to be reduced; in effect, it introduces elements into the political process that are not unlike those found in the operating of competitive markets.

Both the decentralization and size factors suggest that, where possible, collective activity should be organized in small rather than large political units. Organization in large units may be justified only by the overwhelming importance of the externality that remains after localized and decentralized collectivization.

While this scenario is worth supporting, liberalism's concept of expanding civil society is a superior alternative. If things can be done by civil society, then do not give that function to local government, and much less to the national or central government.

So, what is the optimum size of government?


One that is small enough and not cause unnecessary regulatory burdens and costly taxes and fees, but big enough to enforce the rule of law. To provide security and peace of mind to people that their lives, their private property, and  their dignity and freedom of expression and mobility are respected and protected against aggression and forced expropriation.
--------------