In the late 80s, there was a very popular political satire program on tv, the first of its kind in the Philippines I think. It was the Sic O'Clock News. It was shown on IBC Channel 13, then a government-sequestered tv network from the deposed dictatorship, starting 1987 or 1988. 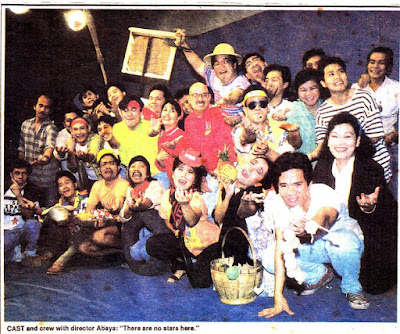 This is the original cast -- so wild, so wacky, so funny. It was led by high-powered brains in movie and comedy, like Director Marilou Diaz-Abaya, chief writer Amado Lacuesta (+), news anchors Ces Quesada and Jimmy Fabregas. This picture includes the production and support staff, not just the cast.

This and next two photos came from Dina Padilla's camera, posted in our Sic O Clockers facebook group. Thanks Dins, 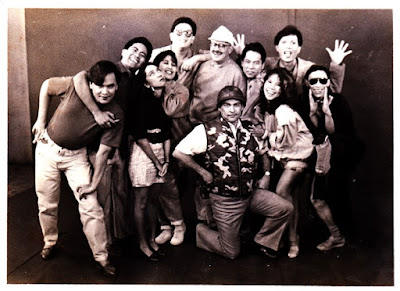 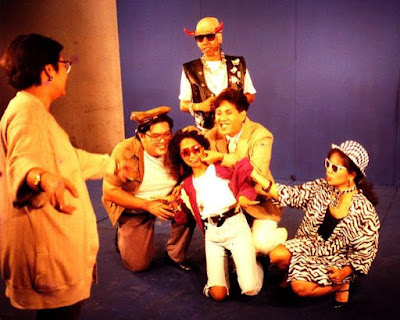 Santa banana que barbaridad! I was also part of the gang! (standing, in shades) hehehe. Yep, I was drawn to the gang by Direk Marilou herself, but towards the latter part of the show, sometime in late 1989.

I was working with Prof. Randy David as one of his researchers-talent coordinators in his tv program, Public Forum, also shown in IBC-13 then. Direk Marilou was also the show's director. The Public Forum staff and Sic O'Clock would often have joint parties and planning because of Direk Marilou. Direk thought that I could be one of the cannon fodders in the political satire against the corrupt and thieves in the Cory Aquino government then.

When there was a coup d'etat, led again by Gringo Honasan I think, in 1990, December that year, we sang this in one of the program's episodes: 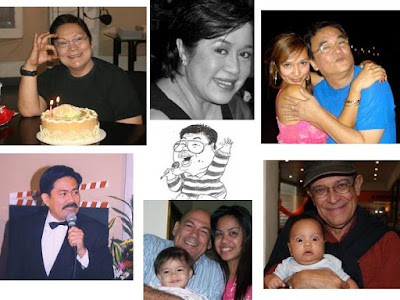 Here are some of the guys now in their facebook profile. From top left, clockwise: Direk Marilou, Ces, Manny, Jimmy, Jon, Joji. The cartoon in the middle is the profile picture of Wilson Go, hohoho.

Joji created the Sic O'Clockers group in facebook only recently, and that's how I got reconnected with some of the gang. Sad to hear that about 12 of our friends in the cast and support staff have already met our creator. Many of us now are also working abroad.

Direk Marilou is a good friend in fb. She has the big C though, a breast C, discovered in 2007. She gives regular update about her chemo and related treatment. Haaaa, Direk is a cheerful and brave warrior. She goes scuba diving in between her treatment :-) and I think also has some teaching load on acting and directing. Her latest movie directed is "Ikaw ang Pag-ibig" shown January this year. See what kind of a warrior she is?

I posted this story in my facebook wall, here are the comments from some friends:

Eddie de Vega: My favorite was the episode about the Iraqi invasion of Kuwait and you were pretending to be a Kuwaiti sheik distressed over the burning of your oil fields, and then these English, French and US arms dealers were playing payabang as to which country sold the weapons which Iraq was using to invade Kuwait. And then you were mad at them, and they asked, "sino ba ang nagpareham ng pera sa Iraq para makabili sila ng weapons?!" HAHAHAHAHA.

I was also amazed with Jaime Fabregas' excellent Tagalog. Tisoy na tisoy but 100% Filipino in spirit.

Luie Guia: My favorite when I was still in UP

Sic created a small storm in showbiz during that time because of guys like Rene, Ces, Jimmy, Joji, ang dami talaga. Pero ako +1 or 2 others, nasali ng Sic when Rene was no longer showing up in Sic shooting.

Eddie: You mean they thought you resembled Rene Requiestas?!?!

Nonoy: No. They wanted someone to be worse-looking than Rene R! :-)

i was a certified sic o'clock junkie back then. i even used to watch the re-runs when they were briefly aired. cheers to all of you!

thanks mel22. I was also wondering how Direk Marilou was able to spot and gather so many wacky and wild actors and trying-hard actors in one program. A few actors/actresses, dinadaan sa directing ang pagigiging comedian but majority are really natural comedians.