On IPR Abolition 9: Seed Patent and Explosion of Seed Varieties

One of the pet peeves of the anti-IPR groups and individuals, particularly the socialists and some anarchists, is the patenting of seeds -- rice, corn, eggplant, tomato, many other vegetables and crops. The usual arguments given are that (a) IPRs create monopoly, (b) ideas are non-scarce, there is no competition when one person will use an idea discovered or invented by another person. See my earlier discussion, On intellectual property abolition, Part 8.

Let me give the example of the most important crop in the Philippines and many other countries, rice. The International Rice Research Institute (IRRI) has more than 112,000 different types of rice in its genebank. See the International Rice Genebank (IRG). And aside from IRRI, there are many other rice research institutions worldwide -- academic, national governments, NGOs, etc. -- that keep their own rice genebank too. See also the long List of rice varieties in many countries, from wikipedia.

Let us take the more than 112,000 different rice varieties in the IRRI genebank alone. I do not know how many of them were "natural" or "organic" varieties, and how many were products of biotechnology to develop certain properties, like drought resistant, flood resistant, resistant to certain insects, pests and microbes, and so on. And those rice varieties are patented. Modern science has allowed rice farmers, from small scale to corporate farmers, to develop high-yielding varieties with shorter harvest period.

If people are wondering why the population alarmism of "millions will starve to death" created by Thomas Malthus in the 18th century, to Paul Ehrlich in the 60s to 70s did not happen despite the continued rise in global population, the quick answer is rising productivity due to modern science and biotechnology. And the IPR system of seed patenting provides additional incentives to private corporations, private research institutes, even some public research institutes, to spend huge amount of money and engage the brightest minds in agricultural science, biotechnology, biochemistry and related fields.

So, as the number of rice varieties keep expanding worldwide, who has the monopoly of important rice seeds? IRRI? The UN? Is there a single corporation, or cabal of corporations, that monopolize all those 112,000+ seeds? Was anyone disallowed or disenfranchised from developing or inventing his/their own new rice variety? 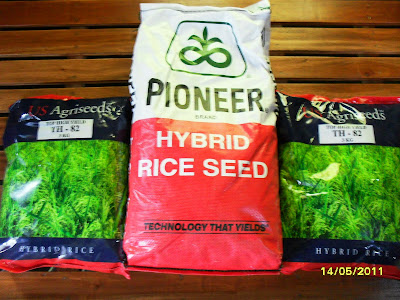 Here are two examples of those more modern, more high yielding rice varieties introduced in the Philippines. I saw them in a rice farming village in Pangasinan. The farmers that I talked to said these seeds are expensive, P1,350 for a 5-kilos sack Pioneer hybrid rice seed (middle), and P600 for a 3-kilos pack of Agriseeds. But they have heard a lot and saw examples of their neighboring farmers who harvested about 2x the already high yielding variety that they were using for many years now. 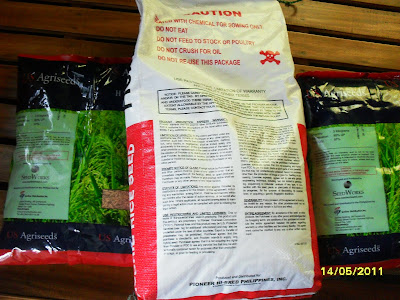 I am not a rice farmer, so I do not know the difference in properties of these new seed varieties with the older varieties. I just took photos of the packaging. Here are the other side of those 2 varieties above.

The embrace -- and risk-taking -- of small scale farmers of more expensive, patented rice seeds, but will significantly increase their harvest and income, is a good sign. The goal of farmers is simple: higher harvest, higher income.

Plant patent is 20 years from the date a patent was applied. I do not know if seed patent has the same procedure as drug patent. For the latter, the various clinical trials and other R&D eat up 10 to 13 years of the 20 years drug patent so that the actual marketing and higher price period is only 7 to 10 years.

Once the plant or seed patent expires, other seed developers, corporate or academic or NGOs, can use the off-patent seed variety for propagation to more farmers. The rest of humanity benefits from the expensive research, the risk-taking, trial and error efforts by the innovator companies and scientists.

The continued demonization of the IPR system and the individuals, entrepreneurs and companies who seek IPR protection because they already spent huge amount of resources for the expensive and risky R&D work to develop ever more high yielding seed varieties, from rice to corn to vegetables and fruits, is often driven by emotion and not reason. When socialists attack those innovator corporations, it is understandable because socialists simply hate private corporations who make profit, because there is "labor exploitation" involved, because there is "price gouging of consumers" involved. That is why they advocate the forcible take over and ownership of all means of production by the state.

When other free marketers however, attack private companies and individuals that seek IPR protection after they spent on expensive R&D and want to make high profit someday, there is inconsistency in their advocacy of the free enterprise system. If they hate private ownership of inventions, if they want more socialized, more collective, more communal ownership of inventions, to my mind, that position is closer to socialism.
----

1. Should intellectual property rights be abolished? (22 pages)
2. Population alarmism and Paul Ehrlich
Posted by Bienvenido Oplas Jr at 10:04 AM