Is Asian democracy in crisis?

This afternoon, I attended the forum, Saving Asian Democracy: Can the Philippines Lead the Way?, at DLSU Manila main campus. The event was sponsored by the Friedrich Naumann Foundation for Liberty (FNF) and the Council of Asian Liberals and Democrats (CALD).

Just pondering on the title of the symposium, I asked myself, "Why, is Asian democracy in crisis that it needs to be saved?" Since I do not have a clear answer to my own question, and the three speakers are really experts on the subject -- Dr. Rainer Adam, the Regional Director of FNF for SE Asia and East Asia; Dr. Neric Acosta, a former Congressman and political science academic; and Maria Ressa, a noted journalist, I decided to attend the symposium. 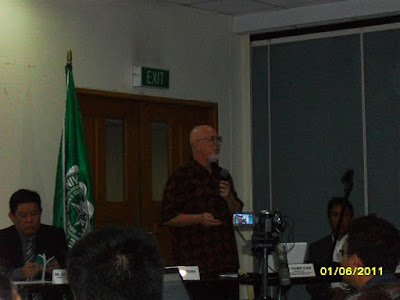 Rainer talked about the result of Freedom Barometer Asia 2010 Report. Why measure the freedom barometer in East Asia, What are the variables considered, Where are the data sources coming from, What are the country results, etc.

The Freedom Barometer is a simple yet useful measurement of freedom in the countries covered. It considers 3 important factors: rule of law, political freedom, and economic freedom. In most Economic Freedom Index or Economic Competitiveness Index and related annual surveys, Hong Kong and Singapore are among the runaway topnotchers every year, both in Asia and worldwide. But are the rich Singaporeans really that free? Can they open any website or blog which has some political content without threat of being closed down by their government? Can they openly criticize abuses and/or wastes by their government? The quick answer is NO. Thus, such political realities are factored in by this freedom barometer.

So, how did Singapore, and the Philippines, rank in this study? Singapore was 4th after the top 3, Japan, Taiwan and South Korea. 5th to 10th place, in order, were Mongolia, Indonesia, Malaysia, Philippines, Thailand, Vietnam. 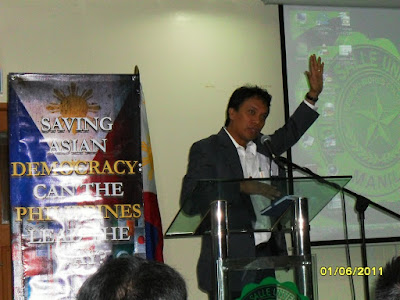 Neric talked about democracy, freedom and individual dignity. He noted how the practice (or non-practice) of democracy in Asia has a very wide range. Myanmar and North Korea at one extreme, Singapore, Vietnam and China near this side, and the Philippines on the other extreme.

Neric narrated how in one forum they have in a university in Singapore, government spies later surrounded them. And followed them wherever they go -- to restaurants, malls and shops, their hotel. They were literally harassed by the Singapore government spies, even if their forum was in an academic environment. Emails can be monitored by the government if they target you. 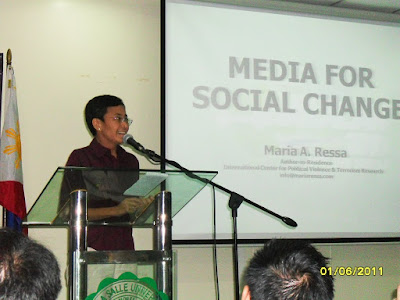 Maria Ressa gave a fantastic presentation too, entitled Media for Social Change. It did not directly answer the forum question, but it did point to one important aspect of democracy: individual responsibility to protect freedom.

She showed how social media and modern technology in ICT is affecting the way people think and interact with each other. These days, people, especially the young, do not rely on listening to candidates in political rallies. read, watch, listen to the mainstream media (newspapers, tv and radio). Social networking media and blogs are among the effective and credible sources of information because they rely on citizen journalism, on plurality and diversity of opinions, perspectives and private information. 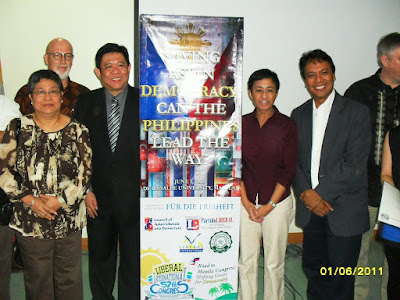 So, after hearing the 3 speakers, my answer to my own question, "Is Asian democracy in crisis?" was NO. Democracy and political freedom in Asia is undergoing gradual changes but they are not exactly in a "crisis" situation of moving towards authoritarianism. There is a wide range of level of democratization in many Asian countries, from the currently authoritarian states like North Korea, Myanmar and China, to the rather rambunctious democratic states like the Philippines.

Somehow, a "tipping point" towards a more mature type of democracy will be reached in the future, but it will not be a simultaneous event. It will be a piecemeal development. Thanks to endless development and innovation in social networking and the web. They do help catalyze this gradual evolution of democratization in Asia and other parts of the world.
----

See related paper, Facebook and the subversiveness of capitalism
Posted by Bienvenido Oplas Jr at 10:52 PM