Below is a short guest post from a Filipino friend, Al Protacio. Al is geologist, also graduated from UP. He is now working in an energy company in UK.
-----

AGW vs the Law of Thermodynamics

As I said before, the solution to the AGW scam is no longer in science. The solution is now political. Don't vote for the politicians who support the anthropogenic global warming (AGW) stupidity.

However, convincing people that believing in AGW is utter stupidity is another thing. The attached figure should convince people who at the very least understand the most basic principles of thermodynamics (e.g. engineers, scientists, etc.): 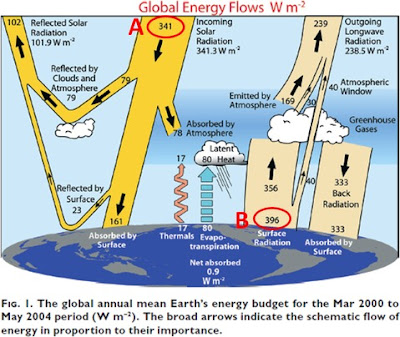 Trenberth is one of the chief proponents of AGW (in the religion of AGW, he is one of the gods). As the figure shows, the Earth is radiating more energy (B) than it's receiving from the Sun (A) [the only source of energy].

This clearly violates the First Law of Thermodynamics which states, "Energy can neither be created nor destroyed. It can only change forms." They try to explain Earth's higher energy from the back radiation coming from the greenhouse gases. This bogus explanation violates the Second Law of Thermodynamics which states, "Heat can spontaneously be conducted or radiated from a higher-temperature region to a lower-temperature region, but not the other way around." This bogus explanation is also how the AGW proponents prove the Sun's negligible role in global warming.

I kept this post specific to Thermodynamics because this attacks the very foundation of the AGW fantasy. This alone destroys all imaginary scientific support to the delusional fantasy called AGW.

I've researched more on the purported science behind AGW. Many of the high level discussions tend to blind the common person with highfaluting physics and math. This "shock and awe" strategy usually works because the uninitiated would tend to believe based on faith things that go way above their heads. This strategy also imbues a false sense of credibility even though the very basic principles in physics are violated. There are lots of websites which explain in simple terms how AGW violates physics. They peel away on the AGW science mystique that the fanatical proponents so vigorously invoke.

It is very difficult to educate people who refuse to understand. In local parlance (sa Tagalog), "Mahirap gisingin ang gising." These are the AGW proponents.
-----