On IPR Abolition 8: Data Exclusivity in the Proposed EU-Philippines FTA

ate last month, there was a roundtable discussion between NGO leaders of the Coalition for Health Advocacy and Transparency (CHAT) where MG Thinkers is a member, and some convenors of the EU-ASEAN FTA (Free Trade Agreement) Network of NGOs. The main presenters were from the Focus on the Global South and the Fair Trade Alliance (FairTrade).

The FTA network NGO leaders are watching the proposals by the EU for the possible EU-Philippines FTA, on the aspect of IPR and medicines. They said that the EU wants a stronger data exclusivity agreement with the Philippines, like the patent period to start not from the discovery of the drug molecule, but from final approval and marketing of the drugs. I have not seen the draft agreement yet, it will be tackled in another round table discussion next month. 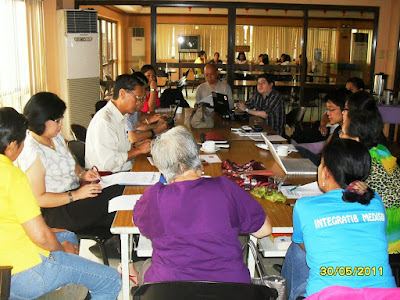 There was a proposal from a leader of Sanlakas, a militant labor organization advocating for socialism, that civil society groups should air for the "highest" form of protest like the outright abolition of the IPR system. Many NGO leaders in CHAT played a big role (me not included) in the passage of the Cheaper Medicines Law or RA 9502. That law simply amended the Intellectual Property Code (IPC) of the Philippines, not abolished the IPR system like drug patents. RA 9502 was a hard-fought law for many CHAT-affiliated NGO leaders and it is not possible, not wise, to just throw it away in favor of advocating for the abolition of IPR.

Notice that not a single local pharmaceutical company, from the biggest (like Unilab) to the smallest, advocates the abolition of IPR. I think all local and generic pharma companies recognize the value of new drug invention by the multinational innovator companies as a very expensive, high-risk, and very bureaucratic (dealing with Food and Drug Administrations (FDAs) endeavor. Thus, they respect the patent given to newly-discovered drug molecules by the innovator companies. They only wish that certain TRIPS flexibilities on IPR like the "early working" principle, compulsory licensing (CL), parallel importation and related measures be given to governments of poorer countries to allow such governments and local pharmas to deal with certain health emergencies. That is why RA 9502 was enacted into a law.

During lunch, I discussed with the Sanlakas leader my observation that there are two groups of people who support the abolition of all forms of IPR. The socialists or the lovers of BIG government, and the libertarian anarchists, or the lovers of ZERO government. Libertarians are supposed to be free marketers, to support private property rights. The main difference between capitalism and socialism is that the former supports and respects private property ownership of the means of production (thus, advocacy for private property rights) while the latter disrespects such rights and supports state and social ownership of the means of production.

Well, I've been a Marxist-socialist (but never a Maoist) for a few years in the 80s, and very briefly was a fan of Michael Bakunin and other anarchists. So somehow I know how the minds of the socialists and anarchists work. Maybe, I could be wrong.

When the socialists call for the abolition of IPR as "non-property rights", it is understandable because they are consistent with the abolition of private property rights of the means of production (land, machines, factories, offices, etc.). Drug molecules, song compositions, books and scientific papers, etc. are considered part of the means of production. So for the socialists, whether physical property or intellectual property, both cannot be granted as private property; both should be state and communal property.

The libertarian anarchists' arguments for IPR abolition are four: (1) Ideas are non-scarce and there is no conflict among people when they use such non-scarce commodity, (2) ideas cannot be owned in the first place, (3) IPRs like patent, copyright and trademark, create monopolies, and (4) all IPRs are state-granted and issued.

My quick answer to all points above are:
(1) Bright ideas are scarce, idiotic ideas are not, they abound, and one proof is that governments around the world keep expanding.
(2) Ideas are ownable, bright minds who pursue molecular biology from BS up to PhD and post-doctoral degrees for instance, will pursue a full time career of producing nothing but ideas, they should be entitled to their own inventions.
(3) True that IPRs create monopolies, but not industry monopolies, rather, brand or product monopolies, better termed as "mini-monopolies." One million rock songs, one million song copyrights, no problem; there is no single "rock song copyright."
And (4) it is possible that IPRs can be issued by industry associations in the future. A system of reward and punishment can be implemented for respect or disrespect of IPR at the private, industry level.

It is funny how some anarchists would label other free marketers who support the IPR system, those who disagree with their brand of libertarianism, as "advocating violence". For this dogmatic type of libertarians, there is only one truth of "peace" in this planet: THEIR version. I am not comfortable working with the dogmatists.

Meanwhile, I just read from the Property Rights Alliance that the Australian government is planning legislation that will mandate the removal of trademarks and logos of tobacco manufacturers in cigarette packages. I have posted in Tobacco taxation, Part 2 that I have little or zero sympathy with smoking, but I recognize that people own their bodies. If they want to smoke and smoke, drink and drink, even if they know that it is not good for their health, so be it.

But I am not in favor of such proposed legislation in Australia -- and soon, it will be introduced here in the Philippines and other countries. A company's trademark and logo represents its identity. Remove the trademark and you remove its identity compared to other producers and manufacturers. The public then will have a hard time, or will not be able, to distinguish between the real and fake manufacturers. In addition, such proposal will also violate existing IPR laws, unless they will also amend their respective Intellectual Property Code (IPC) or similar laws.
Posted by Bienvenido Oplas Jr at 1:42 AM