Below are four charts and tables I got from four different sources, related to the various players that affect drug pricing, and the role of advertising and marketing in drug costing.

The first chart, I got from a presentation by a friend at the Coalition for Health Advocacy and Transparency (CHAT), Vanni Villafuerte, during one of CHAT's planning workshop. Vanni gave me permission to use his papers. 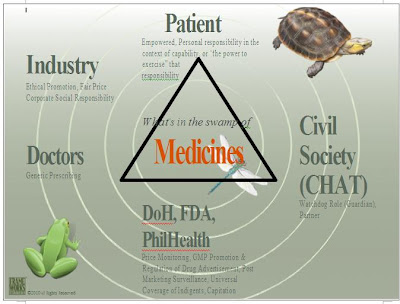 I think Vanni forgot to include two other players. These are the (6) drugstores, pharmacies and their pharmacists, and (7) toll manufacturers and wholesalers.

Take note also that government is much BIGGER than projected here. Government in the health sector is not limited to the Department of Health (DOH), Food and Drugs Administration (FDA) and PhilHealth. There are also the Dept. of Finance (DOF) and Bureau of Internal Revenue (BIR) involved in taxation of medicines; the Intellectual Property Office (IPO) and the courts, for patent and other IPR cases; and the local governments (provinces, cities, municipalities) which have their own medicines procurement and distribution programs, have their own hospitals and rural health clinics.

With plenty of players at both the supply and demand sides, there are many factors therefore, that can influence drug pricing and availability. 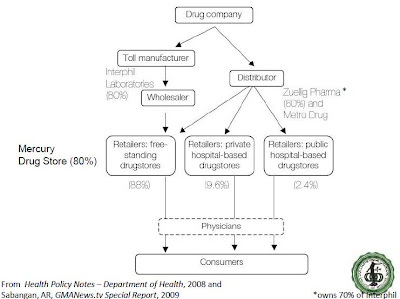 I got this chart from Dr. Delen dela Paz's presentation in February 2010 at the UP College of Law. According to Doc Delen, the drug manufacturing and distribution network is characterized by heavy oligopoly. For instance, toll manufacturing is 80 percent dominated or controlled by Interphil Laboratories, while in drug retailing, 80 percent is controlled by Mercury Drugstore, 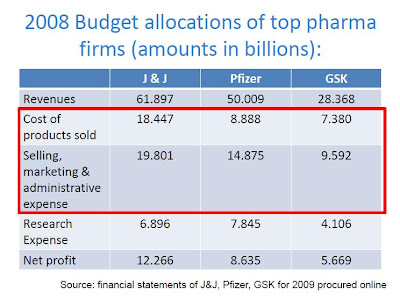 This table, I got from Dr. Guia Crisostomo Tan's presentation sometime in September 2010. No currency was specified, this should be in US $ billion. The numbers in red rectangle compare the "cost of products sold" and "selling, marketing and administrative costs".

I think the "administrative" expense would include the various taxes and fees that a corporation would have to pay to the government (VAT, income tax, import tax, local government tax, etc.) each year. Cutting the expenses on marketing may look tough as drugs are not similar to hamburger or pizza that even ordinary consumer can analyze without the need for expert advice. Drugs, especially newly-discovered, are highly technical products that would need to be introduced to physicians and patients/guardians by specially trained staff. 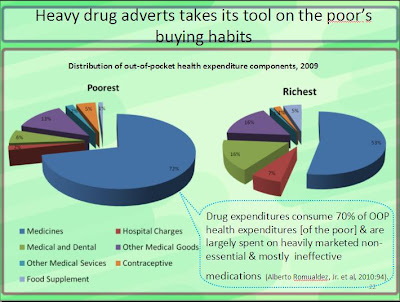 Another chart from Vanni, which he got somewhere else. The drugs being purchased by the poor (left pie) here refer to off-patent and generic drugs, not the patented drugs by the innovator companies. While the "newness" or "revolutionary-ness" of the innovator drugs determine their higher price, the extent of advertising and marketing that the generic pharma companies use, determine not only the price but also the patronage by the public of their products.

To summarize, if drug prices have to be controlled by the government, the above charts are saying that this is an unwise move.

First chart with my addition of 2 other factors is saying that it is not only the pharma industry that determines drug prices. There are other players like the drugstores, physicians, the DOH, etc. If drug prices have to be controlled, then taxes on drugs, profit margin by retailers and hospitals, etc. should also be controlled. Doing these nationwide will create a logistical nightmare for the DOH and other implementing agencies.

Second chart is saying that a significant factor that causes high drug prices is the lack of competition, the degree of oligopoly, in the drug distribution chain.

The third chart is saying that in the case of innovator pharma companies, while the cost of selling, marketing and administration is big, there are two other equally important factors that contribute to high drug prices: the cost of R&D, and the cost of products/drugs sold.

It will be simplistic and parochial to blame just one or two of the various players involved in drug manufacturing to wholesaling and retailing, for high drug prices.

It will also be hypocritical for the government not to own up to certain factors or policies why drug prices are high. And these are the taxes slapped on medicines and vaccines.
--------