Bad year for the warming racket

The current typhoon MeAnn (local name "Falcon") in the Philippines is the 6th for this year. Last year, a big El Nino year, there were only about 12 typhoons. This year, it looks like we will surpass the average of 19 typhoons a year. 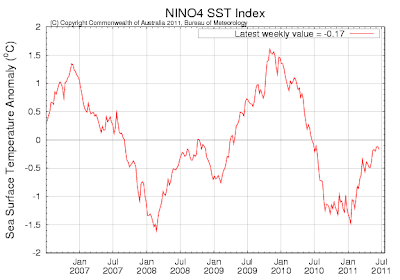 Here is the sea surface temperature (SST) anomaly for equatorial Pacific Ocean Nino region 4, as of June 19, 2011. Graph is from Australia's Bureau of Meteorology. This is bad news for the "man-made warming" campaigners in East Asia. It simply means that the SST now in the Pacific Ocean close to East Asia is still "colder than normal" or "colder than average temperature".

The area that is being used as main indicator for El Nino-La Nina is Pacific's Nino region 3.4, that's the middle of Pacific Ocean. Here is the historical record of SST anomaly for the past 61 years (1950 to 2011). No such thing as "unprecedented warming" or "definite, unequivocal warming". Rather, there is only up-down-up-down, warming-cooling-warming-cooling cycles. Only liars will say there is no such thing as climate cycles of warming-cooling, regardless of the number of SUVs, malls, factories and coal power plants in the planet.

But what will further floor the warming racketers, is this projection of La Nina. It started in May 2010, and El Nino or La Nina events normally last for about 12 months only, sometimes less. But the current La Nina is projected to last for 2 years or even longer, judging from the trajectory of the consensus forecast. Data of the above graph and this one is WUWT's ENSO reference page.

It is indeed unfair that we are still being fed with idiotic claims of "unequivocal warming" or "man-made climate change" by the various warming camps and energy rent-seekers. By not tellig the truth of natural climate cycles, that the warming phase is over and we are entering a cooling phase for many years, people are not being prepared for the severe cooling that is facing us. We are told to get ready for mroe drought, more "water crisis", when what we should prepare is more rains, more flooding, more snow.
Posted by Bienvenido Oplas Jr at 11:41 AM