Much of the climate alarmism peddled around the world are based from the UN IPCC Assessment Reports (ARS), from AR1 in 1990 to AR4 in 2007. Al Gore, the World Wildlife Fund, and other big environmentalist groups have their own predictions too, but it's the IPCC ARs that almost all governments believe and follow.

The latest, AR4, was released last November 2007 -- and weird, the Summary for Policy Makers (SPM) was released in February 2007. The conclusions and recommendations were released 9 months ahead of the actual, supposedly more substantive report. So it is not hard to find the connection between IPCC's climate science and its political science.

AR4 was making predictions almost 100 years into the future (2007 to 2100) based on global computer models (GCMs). And all the UN agencies working on the environment and climate like the UN Framework Convention on Climate Change (FCCC), UN Environmental Program (UNEP), World Meteorological Organization (WMO), other offices and bureaucracies which have indirect work on the environment, plus almost all governments, believe those predictions as if they were 100 percent certain, as if they were past historical data.

A physicist, Dr. Clive Best, made exactly that kind of comparison. In his blog post, 1990 IPCC predictions confront the data the other day, he showed these graphs below. 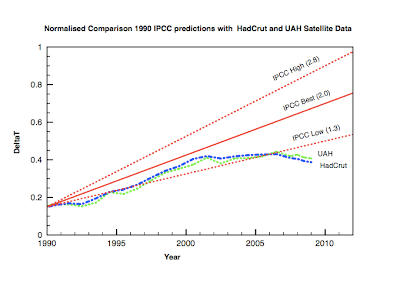 AR1 (1990) said "...predicted rise from 1990 of 0.7-1.5°C with a best estimate of 1.1C (by 2030).“ The low, high and medium (or best) estimate is shown, versus the Hadley CRU and satellite data from the University of Alabama in Huntsville (UAH). The high and "best" estimates are far out, they are wrong. Only the low estimate of AR1 may prove to be correct, but the flattening of global temperature starting around 2002-03, and even a decline by 2007, would show later that even the low estimates by AR1 could be wrong.

Now, what about the evil, pollutant gas, CO2, isn't it supposed to lead global temperature to ever-rising trend? 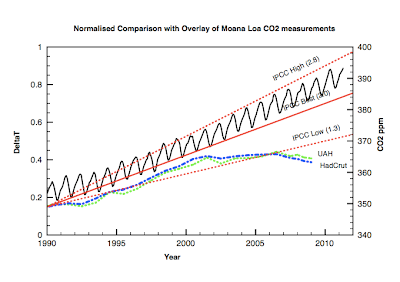 This graph shows that the answer, based on the past two decades, is a big NO. CO2 concentration in the atmosphere remained rising over the past 10 years. The physicist made these conclusions:

Following a gradual rise of about 0.2 degrees from 1990 to 2000, global temperatures have stopped increasing and have actually fallen slightly. The only IPCC prediction which remains consistent with the current data is the lower prediction of a 0.7 degree rise from 1990 to 2030. The “Best” IPCC estimate and the higher 1.5 degree rise are ruled out by the data.

CO2 levels in the atmosphere have continued to rise over the last 10 years (see overlay to temperature comparison below in Figure 3) but temperatures have not risen since 2000. This implies that CO2 is not the main driver of global temperatures on these time periods and that other natural mechanisms are at least as important. No evidence of any positive temperature feedback with increasing CO2 levels is found.

A Year Without Summer

Today, the 5th typhoon of the year (local name "Emong") has entered the Philippines. Been raining since last night. This one is among those rare typhoons that come from the South China Sea (west) and exit towards the Pacific Ocean (east).

The Philippines gets 20 typhoons a year on average, mostly coming from the Pacific Ocean. Regular rainy season is from June to October, peak typhoon season in August-September. Last year, super-typhoons started coming in middle of May. This year, it started raining regularly mid-April, with occasional rains since the start of the year.

I wrote the first poem just for fun, then a friend from Indonesia, Luthfi, commented,
“Nice poem. I enjoy it. I think we need government to bring the summer in, :-)”

A year without summer

an archipelago near the equator
seven thousand one hundred islands
and islets, low tide
some proclaimed to be drowned
by rising oceans of global warming.

an archipelago drenched by the rains
in the supposedly hot months
of april and may
should be the months of cloudless skies
became the months of dark clouds.

when climate science becomes political science
when politicians and actors are the top
spokesmen of global warming hysteria
hard natural science is relegated
when their message contradicts those by the spokesmen.

a year without summer
of chilly winds, clouds and rains
of floods and typhoons, not sunny skies
the worst of cooling is not yet over
in the lands and archipelago near the equator.
--------

don't let big money to go away
hundreds of billions of dollars every year
of carbon tax, petrol tax and coal tax
of carbon cap and trade finance
of subsidies to solar, wind and ethanol farms.

don't let big nternational meetings go away
from Bali, Indonesia to Poznan, Poland
from Germany and America, to Denmark's Copenhagen
the meetings, negotiations, wheeling and dealing
from caps and curbs, to climate change compensation.

don't let the big Sun spoil the party
don't cite solar irradiation and inactivity
don't mention solar cycles and periods of tranquility
don't let the Sun go down on me
(thanks to Elton John for this song a-timely)
Posted by Bienvenido Oplas Jr at 12:21 AM