I am re-posting this investigative article from Newsbreak. The gory details of robbery in PhilHealth are discussed here.
---------

PUBLISHED ON MAY 25, 2011
By EDWIN ESPEJO
Maggie De Pano Fellow

MANILA, Philippines—For many years you’ve been paying your Philhealth dues, and so has your company. But that money may have been misused to finance bankrupt hospitals and fatten doctors’ salaries.

As early as four years ago, a scandal hit the Philippine Health Insurance Corp., which confirmed allegations that some private hospitals and doctors have been defrauding the state-run health insurer.

In her testimony before a 2007 congressional hearing, Dr. Madeleine Valera, Philhealth vice president for health finance policy, said that since 1995, Philhealth had lost as much as P4 billion due to fraudulent claims.

The anecdotes behind these claims are both tragic and true. In Iloilo, one eye doctor claimed to have performed 2, 071 eye surgeries in one year, for a total of P16 million in professional fees that he collected from Philhealth in 2006. When a Philhealth inspection team visited a hospital in Davao City, it caught janitors in hospital beds pretending to be Philhealth-accredited patients.

Today, various estimates show that Philhealth is still losing up to P500 million annually due to bogus claims. This amount can already cover additional 500,000 indigent families under a sponsored program scheme.

The continued abuse of the funds is also behind the limited coverage for new entrants to the labor force, since a new employee will have to contribute for at least nine months within the year of confinement before he or she could be entitled to benefits.
The problem persists because of government’s failure to prosecute any of the players involved in the scam.

While some hospitals, such as the Our Lady of Mercy Specialty Hospital in Bacolod and the General Santos Doctors Hospital in General Santos City, had been fined or suspended, the truth is no one has been jailed for the crime. Weighed down by manpower problems and lack of political will, Philhealth could only implement stop-gap measures to stop the bleeding, such as random inspections and a stricter evaluation of claims.

This special report focuses on the health insurance anomalies in Central Mindanao, covering the provinces of North and South Cotabato, Sarangani and Sultan Kudarat, and some areas in Mindanao.
Do you have other information on fraudulent Philhealth claims in your areas? Click here to send details to Newsbreak

With its billions in funds, now at P69.5 billion, Philhealth is seen as a source of income for many provincial hospitals. In the General Santos Doctors Hospital, at least 20 percent of its estimated P120-million annual budget is derived from Philhealth reimbursements.
The percentage of Philhealth-sourced revenue is higher in accredited private hospitals, since the latter usually don’t set aside a budget for salaries and allowances of its resident doctors. And on the average, doctors claim about one-third of the total hospital bills of Philhealth-accredited patients.
What further motivates unscrupulous hospitals and doctors in padding their bills is the so-called “cost of money,” or the delay in Philhealth reimbursements, which take about 60 days to process.

In 2010, Philhealth released a total of P27.6 billion in benefit payments for a health insurance service that has 22.4 million members. That same year, it collected P26.4 billion in premium contributions.

The billions that Philhealth issued as benefit claims could not all be traced legally. In Central Mindanao, for example, the agency discovered that cheats had employed all tricks in the trade to access the Philhealth fund.

Ramon Aristoza, Philhealth vice president for Central Mindanao, cites an instance when they monitored a drastic rise in hospital confinement in the region. He soon found out that some hospitals were encouraging Philhealth members to confine their dependents in the hospitals as well. There was also a time when hospital confinements during weekends rose. Philhealth eventually learned that doctors had asked their patients to have executive check-ups and get confined during weekends, claiming higher benefits in the process. “As a matter of policy, we do not allow executive check-ups,” Aristoza tells Newsbreak. 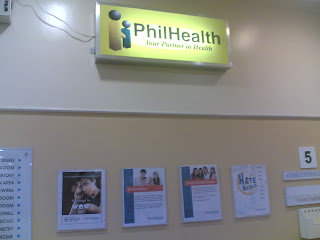 Philhealth was given the opportunity to address this problem in 2007, when it discovered a scheme that defrauded the agency of a lot of money. Between January 2004 to June 2007, or in a span of 42 months, Philhealth paid 19,145 cataract-related claims in Western Visayas hospitals alone. The claims totaled over P390 million.

The numbers meant that these hospitals performed an eye-popping 15 eye surgeries daily for about four years—non-stop.

In one year alone, 10 doctors from Western Visayas were reported to have made claims amounting to P48,491,030 for eye-related operations.

One of these doctors from Iloilo performed a record-breaking 2,071 operations in one year, and claimed almost P16 million in professional fees in 2006.

“Many have earned millions of pesos from Philhealth,” Dr. Madeleine Valera, Philhealth vice president for health finance policy, told a 2007 congressional probe.
Western Visayas was just the tip of the iceberg. In Mindanao, provincial hospitals ransacked the Philhealth fund through the same scheme.

Philhealth sent a legal team from its central office to conduct a similar investigation on the General Santos Doctors Hospital (GSDH) in General Santos City, after it discovered an unusually high number of cataract operations performed by a single doctor.

Aristoza says cataract operations, along with circumcision and toe nail operations, were among the common medical operation used in making fraudulent claims. He explains that eye surgeries and circumcision are quick and easy, and can be done en masse, especially during provincial medical missions and outreach programs.

These medical missions are however free, but doctors were charging professional fees against Philhealth. The agency has since banned the practice.

Former congressman and now South Cotabato Gov. Arthur Pinggoy, confirmed that some doctors have taken advantage of medical missions to claim professional fees from Philhealth Pinggoy and former congressman Rey Aquino, a medical doctor who is now CEO of Philhealth, led the probe on bogus claims in 2007. Pinggoy chaired the committee on health; his family also owns a hospital in South Cotabato.

In Central Mindanao, one of its 10 accredited eye doctors stood out for the unusual number of claims he filed before Philhealth and those field on his behalf by one hospital. Eye surgeries in the region dramatically rose when Dr. Isaac Villegas was accredited by the General Santos District Hospital but also dramatically dropped when Philhealth started its probe....
-----

I'm wondering, why do we have to expand a program where past wastes and robbery were not resolved yet, where no one went to jail yet even when caught flat footed, stealing millions of pesos? Next time, another round of thieves with new tricks, schemes and drama will come in. And we will say "no worries, so long as everyone should have PhilHelth cards"?

PhilHealth needs more than just "internal reforms". It should be coerced to reform by removing its monopoly over mandatory membership. If PhilHealth has competitors and membership to it is not mandatory, it will be forced to reform and become more sensitive to member-contributors.

I wonder if there is an investigation on the accusations that some Philhealth employees are in cahoots with several hospitals to facilitate their fraudulent claims. It takes two to tango. And crimes like this certainly need an insider for the completion of a transaction. It would be foolish for our government to just focus their probe on ailing hospitals. There are Philhealth employees who are ailed to the head.