The government, national or local, always say that they are there to "help and encourage" entrepreneurship among the people, the small and micro ones, especially. There are conflicting signals for this. One is that there is presence of many ambulant vendors, "talipapa" and public market vendors all over the country. The other signal though is that there is also a determined effort by many local government units (LGUs) to collect various business permit and regulatory fees and taxes from these small and micro entrepreneurs.

For a start, here is the country table for the Philippines in the Doing Business 2011 Report, an annual study conducted by the WB and IFC. Numbers apply to medium size corporations in the country.

To start a business, a medium size corporation in the Philippines will have to comply with 15 different procedures, spend at least 38 working days. In paying taxes, 47 different payments (taxes, fees and mandatory contributions) per year, requiring 195 hours, around 25 working days, to comply, and siphoning off 45 percent of a company's gross profit. These numbers assume zero corruption yet.

I took these two pictures below last May 25, 2011, around 12:30 noontime, in Guadalope, Makati City. A female mango vendor was apprehended by barangay (village) patrol, for "blocking" a corner with his mango products. I did not see the situation prior to the arrival of the barangay patrol, I only saw the little drama when the barangay personnel was hauling the woman and her indian mango fruits to their tricycle. 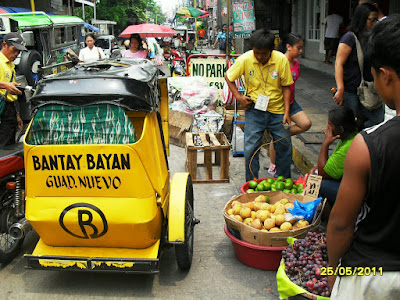 The woman, in green shirt, sitting on a sidewalk and crying, was complaining why the barangay patrol singled her out of many other sidewalk vendors. This was the dialogue that I heard:

Translation:
Woman: Why do you single me out, while you allow the other vendors.
Brgy patrol: The tv monitor has been recording you as blocking that corner.
Woman: I'm working hard, I have 7 children to feed, why don't you go after the thieves and robbers, why do you arrest those who work legitimately.
Brg patrol: This woman is rationalizing why we're hauling her. 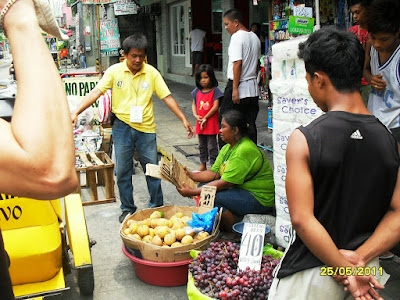 After the woman's mango fruits were hauled inside this yellow tricycle, she was ordered by the other barangay patrolman, to go inside and explain her side at the barangay hall somewhere. She has stopped crying here and accepted her fate that she will have to pay certain fines and penalties to the barangay, from her already meager income as a small mango sidewalk vendor.

I will not say that the woman was not guilty of blocking a busy corner because I did not see the circumstances prior to this scene. But even assuming that she was indeed guilty of such minor "crime", hauling her and her goods to the barangay hall would mean penalties which may be "small" for the barangay officials but could be "big" amount for this poor woman. I have heard several stories from other ambulant vendors how barangay and city employees will just swoop down on them and haul their "kariton" or "palanggana", and they will have to redeem those by paying up to P1,000.

Micro entrepreneurship is not a criminal activity. Government should impose the minimum, if not zero, regulatory fees. Regulations and restrictions should be kept to the minimum too.

More stories and pictures on this subject in the future here.
Posted by Bienvenido Oplas Jr at 12:28 AM