I've been tweeting more often this month. Here they are, first half of the month: 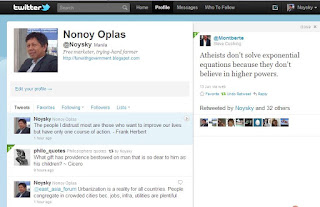 @gpph Renewable energy racket/robbery, http://bit.ly/lpGkq3 and http://bit.ly/kCJFx6. They want to steal P9 B/yr from us next 20 years

You will never do anything in this world without courage. It is the greatest quality of the mind next to honor. - Aristotle

@gpph The RE racket will steal from us energy consumers P9 bill/year for 20 yrs, http://bit.ly/lpGkq3. Warming scam, more legalized robbery

From Cicero: Laws are silent in time of war... No one has the right to be sorry for himself for a misfortune that strikes everyone.

Bureaucracy defends the status quo long past the time when the quo has lost its status.- Laurence J. Peter

philo_quotes Philosophers quotes by Noysky
Every man has a property in his own person. This nobody has a right to, but himself. ~ John Locke

@NewAsianist High and increasing RP exports of services is just one result of our high population and continued economic globalization.

From Plato: The measure of a man is what he does with power... There is no harm in repeating a good thing.

@wansaiful The welfare state is a good subject to write on. Politicians are well, taxpayers pay the fare :-)

@Jimparedes Fishkill is caused by insufficient dissolved oxygen in the lake, or by volcanic gases from Taal volcano, http://bit.ly/iicopk

@Karen_DaviLa Why does the ABS-CBN network seem to cover, or amplify, the fishkill story in Taal lake compared to other network?

WhoIsMikeGordon Mike Gordon by Noysky
People who say it cannot be done should not interrupt those who are doing it. Unknown

Fr. Aristotle: Men are swayed more by fear than by reverence... Hope is the dream of a waking man... Change in all things is sweet.

From Seneca: We become wiser by adversity... In war there is no prize for runner-up.

@acopatunru @east_asia_forum Not only gender timebomb of too few women, but China's popn itself will be declining, to only 700+M by 2050

@Jimparedes Next 20 yrs, China will face declining population, India's will keep rising. So India will be biggest English speaking nation

"The spirit is willing but the flesh is weak.' Translated to russian, back to english became, 'the wine is agreeable but the meat is stale'.

Fr Mymathcloud: Natural numbers are better for your health…. Geometry is the science of correct reasoning on incorrect figures- George Polya

EventsCloud My Events Cloud by Noysky
@HerreraVeronica Kindness is the language which the deaf can hear and the blind can see.

MyMathCloud My Mathematics Cloud by Noysky
God does not care about our mathematical difficulties - he integrates empirically. Albert Einstein

Fr. Montberte: Good girls are bad girls that arent caught… Never make anything simple and efficient when it can be complex and wonderful.

From Mymathcloud: Old mathematicians never die; they just tend to zero… A mathematician is a device for turning coffee into theorems.

Montberte Steve Cushing by Noysky
Planes are so fast nowadays that we can go around the world in two hours, including one hour to get to the airport.

@levenezu Yes, rule of law, not rule of men, will advance the country. The laws vs killing, stealing, rape, etc. shd be upheld, no exception

Jimparedes Jim by Noysky
If you hear a voice within you say you cannot paint, then by all means paint, and that voice will be silenced. ~ Van Gogh

@karadavid that means the drainage is fully clogged. With rainy season until October or even December, it will remain flooded then.

Define apathy? I don't know and I don't care... Work delegation is good bec when things turn sour, it allows you to blame somebody else :-)

Management is like a tree full of monkeys. Those on the top see monkeys below them, those below see a__holes above them :-)

Fr mathcloud: 3 out of every two people are bad at working with fractions… The shortest distance between two points is under construction.

MyMathCloud My Mathematics Cloud by Noysky
No amount of experimentation can ever prove me right, but a single experiment might prove me wrong. Albert Einstein

MyMathCloud My Mathematics Cloud by Noysky
There are three kinds of people in the world; those who can count and those who can't.

From Plato: When the mind is thinking it is talking to itself.... If particulars are to have meaning, there must be universals.

@kikopangilinan Pwede rin "renewable marriage". Every 3, 4 or 5 yrs, a marriage is automatically annulled. Couples will renew their vows.

@HarvardResearch I saw in wiki abt 200 types of cancer. What used to be seen as non-C are now confirmed as C. Thus, d rise in C cases.

Montberte Steve Cushing by Noysky
God must like stupid people; he makes so many of them. #stevec

MyMathCloud My Mathematics Cloud by Noysky
A statistician can have his head in an oven and his feet in ice, and he will say that on the average he feels fine.
-------