The Reading Club Salon 2013 of the Lion Rock Institute is fast approaching, this coming October 19, 2013 to be held in Hong Kong. I will be there. Among the readings of the participants to this theoretical roundtable discussion are the Anti-Federalist Papers. 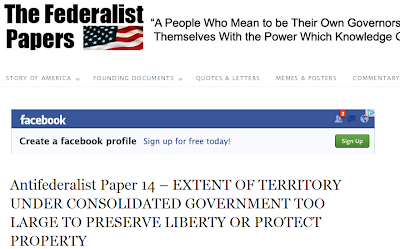 Among the arguments made by G. Clinton or “Cato” was this.

You must risk much, by indispensably placing trusts of the greatest magnitude, into the hands of individuals whose ambition for power, and aggrandizement, will oppress and grind you. Where, from the vast extent of your territory, and the complication of interests, the science of government will become intricate and perplexed, and too mysterious for you to understand and observe; and by which you are to be conducted into a monarchy, either limited or despotic; the latter, Mr. Locke remarks, is a government derived from neither nature nor compact.

Political liberty, the great Montesquieu again observes, consists in security, or at least in the opinion we have of security; and this security, therefore, or the opinion, is best obtained in moderate governments, where the mildness of the laws, and the equality of the manners, beget a confidence in the people, which produces this security, or the opinion. This moderation in governments depends in a great measure on their limits, connected with their political distribution.

In short, NEVER trust big and expansive government and the persons administering it. They will make rules and laws that are too complicated for us but will provide loopholes for their friends. Moderate or limited government can provide us security because its coercive power is limited, limited to equal application of laws to all.

The strongest principle of union resides within our domestic walls. The ties of the parent exceed that of any other. As we depart from home, the next general principle of union is amongst citizens of the same state, where acquaintance, habits, and fortunes, nourish affection, and attachment. Enlarge the circle still further, and, as citizens of different states, though we acknowledge the same national denomination, we lose in the ties of acquaintance, habits, and fortunes, and thus by degrees we lessen in our attachments, till, at length, we no more than acknowledge a sameness of species.


Cool. That is why forced collectivism by a central or national government often begets suspicion, disapproval and discontent . The sentiment by people in the provinces who dislike "Imperial Manila" collecting lots of taxes and fees from them, telling them what are prohibited and which ones are not.

Interesting to note that John Locke has influenced both the Federalists (Alexander Hamilton, James Madison, et al) and the Anti-Federalists (George Clinton, et al). Clinton aka Cato, has mentioned Locke several times in that paper.

I checked A. Hamilton's Federalist No. 9, "The Union as a Safeguard Against Domestic Faction and Insurrection". He wrote,

The definition of a CONFEDERATE REPUBLIC seems simply to be "an assemblage of societies,'' or an association of two or more states into one state. The extent, modifications, and objects of the federal authority are mere matters of discretion. So long as the separate organization of the members be not abolished; so long as it exists, by a constitutional necessity, for local purposes; though it should be in perfect subordination to the general authority of the union, it would still be, in fact and in theory, an association of states, or a confederacy. The proposed Constitution, so far from implying an abolition of the State governments, makes them constituent parts of the national sovereignty, by allowing them a direct representation in the Senate, and leaves in their possession certain exclusive and very important portions of sovereign power. This fully corresponds, in every rational import of the terms, with the idea of a federal government.

Thus, I believe that "degovernmentization" (and more civil society role) in many aspects of our lives is better than decentralization.

Federalism has another, more important role. Remember that the U.S. started as separate "states", not much different from the European countries at present. The U.S. constitution is designed to grant as much powers to the states, and as little as possible to the federal government. That was the only way that the different states could agree to a union. So in the U.S., the federal government cannot abrogate all power to itself, or the union would break apart. I believe this is one reason why, throughout its history, no president of the U.S. has become a tyrant. (The other reason is the Second Amendment granting each citizen the right to own and carry guns freely.) In the Philippines, we have neither federalism nor the strong right to own and bear arms, and for these reasons it was very easy for a Marcos to become a tyrant.

To underline the limited powers of both the federal and state governments, the Tenth Amendment was ratified in 1791. It is considered part of the Bill of Rights. It reads: "The powers not delegated to the United States by the Constitution, nor prohibited by it to the States, are reserved to the States respectively, or to the people."

In order to appreciate the effectiveness of so-called "enumerated powers" and federalism, let's see how it is applied in current events. There have been several states that refused to fully implement Obama's "affordable" health care act, a clear violation of federal law. The violations are not prosecutable, however. Legally, the federal government cannot do much about this intransigence on the part of some state governments. Compare that to what happened when a disgruntled official in Cebu sued then Governor Gwen, and the national government decided the case against Gwen. She was booted out. That is unthinkable in the U.S. (equivalent to Obama firing a locally elected official).

What is the advantage of different states having different local laws from the rest of the country? The answer is freedom. In such a country, people are free to vote with their feet. If they don't like the high taxes of California, for example, they simply move to another state with lower taxes, no questions asked.

I thanked Carlos for his ideas. From the words of Clinton or Cato above though, he desired not just a central, federal government, but big government itself even at the state level. He cautioned against individuals with high ambition for power and aggrandizement, against laws becoming more complicated. Although he settled to respect having state governments as the "maximum" that can rule over the people, with limited function and "mild laws".

"Cool. That is why forced collectivism by a central or national government often begets suspicion, disapproval and discontent ."

huh? but he writes :"As we depart from home, the next general principle of union is amongst citizens of the same state, where acquaintance, habits, and fortunes, nourish affection, and attachment."

note: CITIZENS OF THE SAME STATE.