Mining 35: Opposition to Mining, Where Do They Come From?

In my previous article in this subject, I said that the EITI Secretariat has declined my belated application to join their conference last month. Upon the request of a friend who is a DOF official, the secretariat invited me to attend the conference of Day 2. 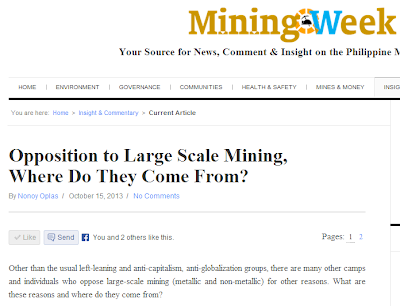 Other than the usual left-leaning and anti-capitalism, anti-globalization groups, there are many other camps and individuals who oppose large-scale mining (metallic and non-metallic) for other reasons. What are these reasons and where do they come from?

During the “Conference on the Adoption of the 2013 EITI Standards” last September 27, 2013 at Crowne Plaza in Ortigas, sponsored by the Extractive Industries Transparency Initiative (EITI) International Secretariat and the World Bank, Dr. Elmer Billedo, Assistant Director of the Mines and Geosciences Bureau (MGB, DENR) was one of the speakers. Among the slides he showed was this one. 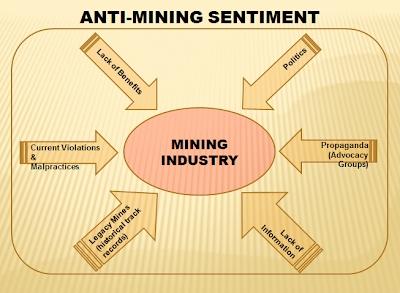 It is a useful illustration and it shows that the major groups of people who oppose the industry come from the following:

1. Politics and politicians, either for personal or professional reasons, the painted or assumed destructiveness of mining is exaggerated, begging for more regulations and taxation on top of existing ones, if not outright banning of LSM.

2. Propaganda groups, especially the anti-capitalism groups who dislike big corporations and multinational firms extracting rocks and soil from the Philippines and exported to other countries.

3. Lack of information by the public, media and other civil society organizations. Many are not aware that “responsible mining” is possible and is in fact happening in many large mining projects in the country.

4. Legacy mines, like the mining disaster in Marinduque about two decades ago. Then the occasional fatal landslides in Mt. Diwalwal and other areas where small scale mining (SSM) is the dominant practice, but is attributed to large scale mining (LSM).

5. Current violations of environmental standards, by some LSM companies, and is more rampant among SSM but is attributed by the public to LSM.

6. Lack of benefits, coming from some mine workers themselves and residents of the mining village. Sometimes this is an objective assessment but oftentimes, it is a subjective and biased opinion. For instance, some residents who are not connected with the mining company may feel that they should be “entitled” too to some benefits like free or highly subsidized healthcare, education, given by the mining  firm.

As a result of such opposition, (a) local government units (LGUs) are issuing more ordinances and resolutions against mining; (b) Congress is considering Bills declaring “mining-free” provinces, cities and municipalities; (c) MGB-DENR and BIR-DOF are increasing regulatory requirements and taxes; and (d)
Advocacy groups  are filing complaints and cases against mining projects, both in Congress and the Supreme Court. 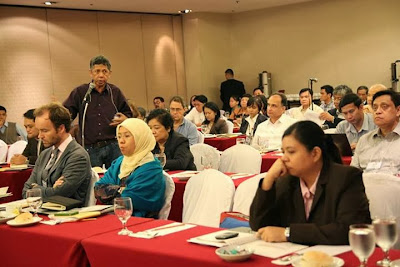 During the open forum, I spoke and shared my observation that many anti-mining groups are easy to address if they are shown with lots of data, that responsible mining can and does exist, that LSM are already over-taxed, that the total area under LSM is very small compared to the total land area of the country. That I was surprised that my former teacher at the UP School of Economics (UPSE), Prof. Winnie Monsod, is misinformed and thinks that mining tax is only the 2 percent excise tax, that is why she is advocating that the Malampaya natural gas sharing scheme of 60-40 of net revenues going to the government and the private developer respectively, should also apply in mining.

Then I suggested that the MGB, DOF and DILG should produce more detailed data available online, like breakdown of mining taxes and fees collected by both national and local governments from LSM, SSM and large non-metallic mining. If the public can see these data for themselves, negative sentiments against LSM and mining in general can decline.

The participation of the Philippines at the EITI is a good move. The regulated and taxed companies can declare how much they have paid to the barangay, city/municipal and provincial governments, the royalties and social development management projects (SDMP) given to communities and people’s cooperatives, and to the MGB, BIR, BOC, SEC and other national agencies. These agencies will also be forced to report how much they collected from each mining enterprise, small and big alike.

Of course there are other costs that are not reported by the mining firms. Like special and monetary requests by the LGUs and national agencies, otherwise these government officials will harass the mining firm, if not disallow its continued operation. This data is hard to produce.


Nonetheless, information is empowerment. The more information that will be available to the public, the lesser will be the misconception and unnecessary opposition  to mining.
-----------