IDEAS 5: Who is a Liberal? What is Limited Government?

This is a nice, well-written paper defining what is liberalism and libertarianism, who is a liberal, what is the rule of law, limited government, and free market capitalism. Written by a friend, the CEO of IDEAS in Malaysia, Wan Saiful Wan Jan. Posted today in their website, reposting here. This essay complements my previous papers under "Pol. Ideology" series in this blog.
------------ 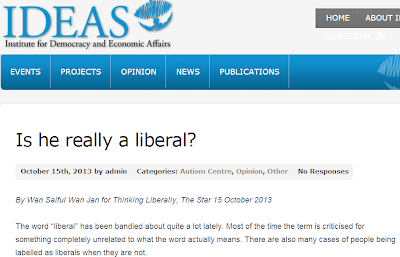 The word “liberal” has been bandied about quite a lot lately. Most of the time the term is criticised for something completely unrelated to what the word actually means. There are also many cases of people being labelled as liberals when they are not.

Clearing the confusion surrounding liberalism is not easy. But we have to start somewhere. So let me try.

The word ‘liberal’ has been abused so much that, in some cases, the meaning has been greatly distorted. In America, the word has been stolen by those who generally believe in greater state intervention (e.g. Obama’s Democratic Party). In Malaysia, some have been trying to associate liberalism with Pakatan Rakyat. Neither of these represents liberalism in the classical sense. In Malaysia, none of our mainstream political parties have a coherent philosophical foundation, while in the US, the Democrats are on the left.

Classical liberalism is usually used in Europe to describe a political philosophy that in the United States would be called libertarianism. Of course there are differences in the details, but for the purpose of this article, let us simplify the discussion and use liberalism and libertarianism interchangeably.

A libertarian’s most basic belief could be traced back to the Abrahamic and Greek idea of a “higher law”, a law by which everyone, including the ruling elites, could be judged. The advent of Islam strengthened this belief, and reinforced the idea that those in positions of power are not the ultimate source of authority. They too are subject to the law.

Libertarians believe in the “rule of law”, not the lack of rules and laws. Libertarianism is a call for everyone to be subject to the same set of rules, with no one being above the law. This is the best safeguard that we have against dictatorship and totalitarianism.

Rule of law calls for equality between the ruled and the ruler. Since the ruling elite holds the key to coercive power – such as the ability to legislate, and control of the armed forces and the police – it is very important that their powers are limited.

If the ruling elites have unlimited powers to legislate and dictate, we will quickly descend into the rule of men. Hence we need a “limited government”, which is another important principle of liberalism.

To prevent government coercion, the roles and powers of the government must be limited, usually through a written constitution that both enumerates and limits executive power with checks and balances.

This is an important point. The ruling elite exists because we the citizens empower them. The rakyat is the true master, and those in power are the servants. Not the other way round. We must do all that we can to prevent anyone in power from behaving like kings and this is why we must demand a limited government.

The concept of limited government implies the need to respect “individual liberty and responsibility”. Individuals are free to choose how they live their lives as long as they do no harm to others, and they must be responsible for what they do. The religious ones must be free to practice their religions, while those who are not must be free to be so too.

Islam tells Muslims to be among the most liberal in this sense. In the Golden Age of Islam, a Muslim leader Rubi’e bin Amir proudly told Persian General Rustom that Islam was sent to free mankind from servitude to other men so that they serve only God. Of course, the rise of a new generation of human gods in Islam (and in other religions) deserves a treatment on its own, but we must be careful to distinguish the principles from the practice.

Perhaps most importantly, the concept of individual liberty demands that those in power must not encroach into what is private to the individuals. The government should only step in when individuals do harm to others, but otherwise they should leave us alone. (See: The Liberty Manifesto)

It is well known that liberals support free markets. But many are confused about why this is so. Some accuse free marketeers as supporting inequality between the haves and the have-nots. And others confuse between the actions of capitalists and principles of capitalism.

Libertarians support the free market capitalism because it is the only system that respects human dignity. The free market is the only system that truly gives people choice and prevents cronyism. In a free market, businesses have to compete to please the rakyat, the consumers. But in a non-free market, businessmen can ignore the rakyat because all they need to do is to collude with politicians to gain favourable treatments and subsidies.

A non-free market system victimises the rakyat because it denies our freedom to choose. And more often than not, systems other than the free market result in the privatisation of profits and nationalisation of losses. All the cronyism, nepotism and corruption that we see around the world are almost always the result of collusions between politicians and businessmen, which can only happen when the economy is not free and this is exactly what the free market want to eradicate.

In short, and at a great risk of oversimplifying a complex issue, being a liberal or a libertarian means believing in the rule of law, limited government, individual liberty and responsibility, and the free market. (See: Philosophy of IDEAS)

The next time someone accuses liberalism of this and that, I urge you firstly judge whether that person knows what he is talking about or not. We need to spot those who more often than not talk nonsense, and expose them for their ignorance.