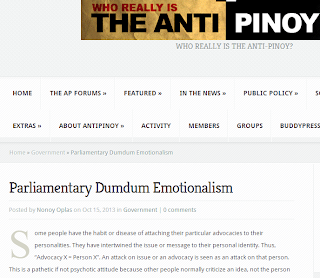 Some people have the habit or disease of attaching their particular advocacies to their personalities. They have intertwined the issue or message to their personal identity. Thus, "Advocacy X = Person X". An attack on issue or an advocacy is seen as an attack on that person. This is a pathetic if not psychotic attitude because other people normally criticize an idea, not the person or group of people. There is a distinction between the message and the messenger.

I commented on it by way of posting quotes from some free market thinkers.

Another free marketer friend, Carlos Tapang, also commented and we have a brief issue-based exchange.

I am envious of his CORRECT Movement? Why, am I a politician competing with another politician for a particular political office? Am I competing for funding with his CORRECT donors? None of it. It is an illusory statement from an insecure mind.

I am an ingrate? True that Dumdum introduced me to the host of one GNN tv public affairs program host, and true that I was a guest in one of his programs. I must have failed to thank Dumdum 50x or 100x, I think I thanked him only once or twice, too bad. But I don't think I attacked him or his life and soul advocacy of Parliamentarism. I have been an agnostic on the form of government ever since, until now. I do not attack the Parliamentary of Presidential form of government per se, rather, I attack BIG and intrusive government, whether Parliamentary of Presidential. Dumdum posted long, trying to convince me and everyone who bothers to read his long postings fine. But here's the disease: If those long postings do not work and you remain unconvinced, woe upon you. Personal attacks and emotionalism will be launched upon you.

Then called me "evil as his apprentice and protege Froilan Bersamina... lunatic Talibannic extremist... Insane." This man must be suffering from some mental disorder. My critic above is against BIG and intrusive government, both parliamentary and presidential, never against Parliamentary form or Presidential form per se.  I criticize people though, who fashion themselves as "free marketers" but cannot explicitly criticize BIG and ever-expanding government, but I avoid mentioning names as much as possible.

See the repeated personal attacks. Too much angst, too much insecurity publicly advertised.

I remember the RH bill debate. Some "free marketers" supported further expansion of government, allowing the State to impose sex education in the elementary and high school curriculum, impose mandatory and obligatory pro-bono (ie, free) RH services by OB Gyne and other RH practitioners for several hours a year, and so on. I did not support that bill not for any religious reason but for the simple reason that it further expands and already intrusive government.

This is one instance where the proponent of that RH law, parliamentary or presidential government, does not matter. What matters is further expansion of that government and it must not be supported, if one advocates for free market and limited government.
-----------

Posted by Bienvenido Oplas Jr at 3:58 AM

true, but do you believe that the form of govt ALONE doesnt matter?

dont you think that the euro (and maintaining it) has ANYTHING TO DO with the EURO crisis?

If the goal is to expand economic and individual freedom, the form of government does matter, but minimally. What matters a lot, is limiting (not abolishing, not expanding) government coercive power to focus on promulgating the rule of law. The law against murder, against stealing, against abduction, etc.