Lion Rock 10: On Having Centralized or Self-Government

This Saturday, I will attend the Reading Club Salon 2013 of the Lion Rock Institute in Hong Kong. It is a full day round table discussion with the theme this year, "Democracy -- Past, Present and Future". 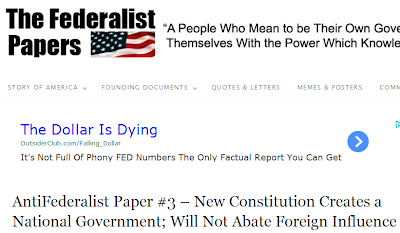 There are dozens of reading materials. Today I read  Anti-Federalist Paper #3. This portion is cool.

'The only foreign, or at least evil foreign influence, must be obtained through corruption. Where the government is lodged in the body of the people, as in Switzerland, they can never be corrupted; for no prince, or people, can have resources enough to corrupt the majority of a nation; and if they could, the play is not worth the candle. The facility of corruption is increased in proportion as power tends by representation or delegation, to a concentration in the hands of a few. . . ."
Top of Form

"Where the people are free there can be no great contrast or distinction among honest citizens in or out of office. In proportion as the people lose their freedom, every gradation of distinction, between the Governors and governed obtains, until the former become masters, and the latter become slaves.... Our people are capable of being made anything that human nature was or is capable of, if we would only have a little patience and give them good and wholesome institutions; but I see none such and very little prospect of such. Alas! I see nothing in my fellow-citizens, that will permit my still fostering the delusion, that they are now capable of sustaining the weight of SELF-GOVERNMENT: a burden to which Greek and Roman shoulders proved unequal."

I agree with the statement that if people are free, corruption, extortion and distrust of the rule of law will significantly decline. And I think the "self government" here refers to a state of civil society. People are mature and responsible enough to run their own lives, their own communities, without much coercion and central planning.

"If the body of the people will not govern themselves, and govern themselves well too, the consequence is unavoidable — a FEW will, and must govern them. Then it is that government becomes truly a government by force only, where men relinquish part of their natural rights to secure the rest, instead of an union of will and force, to protect all their natural rights, which ought to be the foundation of every rightful social compact."

Yes, failure of "self government" would mean the success of coercive government. But such coercion is limited to protecting the people's natural rights. Right to life, right to private property, right to liberty.

"As to any nation attacking a number of confederated independent republics … it is not to be expected, more especially as the wealth of the empire is there universally diffused, and will not be collected into any one overgrown, luxurious and effeminate capital to become a lure to the enterprising ambitious."

"In small independent States contiguous to each other, the people run away and leave despotism to reek its vengeance on itself; and thus it is that moderation becomes with them, the law of self-preservation."

This is possible, so long as people have the freedom to "vote with their feet" or mobility among people across countries and continentis relatively easy.
Bottom of Form
-----------