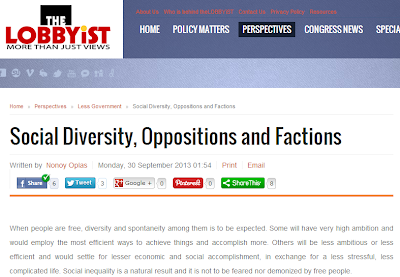 When people are free, diversity and spontaneity among them is to be expected. Some will have very high ambition and would employ the most efficient ways to achieve things and accomplish more. Others will be less ambitious or less efficient and would settle for lesser economic and social accomplishment, in exchange for a less stressful, less complicated life. Social inequality is a natural result and it is not to be feared nor demonized by free people.

Certain sectors of society though would not look kindly at this situation and would device ways via government coercion to limit if not control such diversity and inequality in society. Political groups and factions are created and their size and influence will grow in direct proportion to the degree of coercion and intervention to be exercised by government.

Democracy and the philosophy of majority rule is supposed to address animosities among competing factions and political groups in society. How should it be done?

This question will be explored by participants of the Reading Club Salon 2013, in a round table discussion this coming October 19, 2013 in Hong Kong. The event is sponsored by the Lion Rock Institute, Hong Kong’s first and only free market think tank. I will be one of the foreign participants of that discussion.

Among the materials that participants must read are The Federalist Papers, essays promoting the ratification of the US Constitution and were published between 1787-1788.

James Madison, among the fathers of the US Constitution and also served as the 4th US President  (1809-1817) wrote Federalist No. 10 (November 23, 1787), particularly on political factions. He said,

… two methods of removing the causes of faction: the one, by destroying the liberty which is essential to its existence; the other, by giving to every citizen the same opinions, the same passions, and the same interests.

It could never be more truly said than of the first remedy, that it was worse than the disease. Liberty is to faction what air is to fire, an aliment without which it instantly expires. But it could not be less folly to abolish liberty, which is essential to political life, because it nourishes faction, than it would be to wish the annihilation of air, which is essential to animal life…

The diversity in the faculties of men, from which the rights of property originate, is not less an insuperable obstacle to a uniformity of interests. The protection of these faculties is the first object of government. From the protection of different and unequal faculties of acquiring property, the possession of different degrees and kinds of property immediately results; and from the influence of these on the sentiments and views of the respective proprietors, ensues a division of the society into different interests and parties.

This is true. Factions, diversity and inequality among people is natural and inevitable if society is free. Individual freedom allows people to choose their fate, to be lazy or hardworking, complacent or ambitious. So from such liberty, acquisition of private property (from cell phones to tv, cars, houses, shops and offices) is inevitable, and it is an important function of government to protect private property. Madison continued,

But the most common and durable source of factions has been the various and unequal distribution of property. Those who hold and those who are without property have ever formed distinct interests in society. Those who are creditors, and those who are debtors, fall under a like discrimination. A landed interest, a manufacturing interest, a mercantile interest, a moneyed interest, with many lesser interests, grow up of necessity in civilized nations, and divide them into different classes, actuated by different sentiments and views. The regulation of these various and interfering interests forms the principal task of modern legislation, and involves the spirit of party and faction in the necessary and ordinary operations of the government.

Again, this is true. Since inequality and diverging economic interests is inevitable, a minimum degree of regulation, not zero regulation, is necessary to protect the people's right to property and right to liberty, without resorting to violence and heavy coercion resulting in property expropriation.

My American academic friend who teaches part-time at UP Visayas, Bruce Hall, made this important clarification. He wrote,

Let me, the lecturer in history, put Madison's quote into context. To Madison and other 18th Century American political thinkers, factions were evil things. Factions, as opposed to interests, were permanent organizations of politicians who worked to increase their organizations power and wealth, bending the powers of the government to favor them. They were in short organized special interests, that continued issue across issue… This needs to be contrasted with different positions on a particular issue. There will always be multiple sides on any single issue. But those sides are not permanent. They do not continue once the issue is resolved. Nonoy and I might be opponents on Issue A but on Issue B we are allies. Factions are always opposed to each other, across the issues.


This is an important point. The main argument against freedom today -- made by the fascists, communists, social engineers and others -- is that human nature is malleable (by the advocates). That one can create a better world with a strong hand at the top controlling and shaping. That governments properly structure can bring about heaven on earth. Madision, I think, would argue that no human beings are flawed fallen creatures that governments must take our flaws into consideration. Factionalism is one of our flaws. Much as we may hate it, there is no way to get rid of it. We can suppress it artificially with violence but that will not last long Eventually human nature -- like the ocean eroding a cliff -- will win out.

In my experience, the only way to overcome division is to allow it full expression. Allow the sides to fight it out fairly, openly and honestly. Eventually one side wins and the other loses, and since nobody likes losing, they give up.

I like Bruce’s discussion. Madison's point is correct then. Factions and diversity are part of human nature, especially if people are free. It is a "necessary evil" or a "problematic angel" among us. The real evil are attempts to remove and outlaw factions and diversity among men by heavy coercion and central planning. Madison corroborates what Bruce has pointed above.

It is in vain to say that enlightened statesmen will be able to adjust these clashing interests, and render them all subservient to the public good. Enlightened statesmen will not always be at the helm. Nor, in many cases, can such an adjustment be made at all without taking into view indirect and remote considerations, which will rarely prevail over the immediate interest which one party may find in disregarding the rights of another or the good of the whole.

The inference to which we are brought is, that the CAUSES of faction cannot be removed, and that relief is only to be sought in the means of controlling its EFFECTS.

There, enlightened/unselfish/non-compromised statesmen and leaders, will never be able to fix such clashing interests even if they wish to. And even if they can, they will not be around for long. If the structure for their central adjudication, central planning is created and made permanent, a greater danger of scoundrels taking the place of those enlightened statesmen will surface.

People are courting great danger to society and to themselves if they invite bigger government and more central planning policy to intrude into their lives. For one, lots of mandatory contributions (taxes, fees, fines, etc.) will be imposed upon them to sustain those programs, offices and personnel. And second, corruption and plunder of those huge resources is a reality that is seen in many countries around the world. Like the on-going pork barrel scandal in the country today.
--------------

What's your opinion on the US government "shutdown" and debt ceiling issues (interestingly, the debt ceiling issue seems to come year after year since Obama took office)? Whose fault is it, the Democrats, Republicans, or both of them?

Just to add, what's the big deal regarding the Fed thinking of "tapering" QE3?

How come some people claim that the US economy is recovering (which is why the Fed is thinking of tapering QE3) when their government has this big deficit which seems to be growing every year?

In the first place, is "quantitative easing" good monetary policy?

Hi, it's not exactly a "shutdown" as many functions of the federal government considered as "necessary" continue to function. It's more of "slim down", a term from an article in Forbes magazine. Such slim down, though painful for many federal employees, is necessary given the huge public debt of the federal government, requiring hundreds of billions of dollars yearly in interest payment alone. Spending must be controlled if only to minimize further hikes in public debt.

Re QE, it's a huge expansionary monetary policy by the Fed. Printing around $85 billion a month is courting high inflation in the medium term. Printing money to finance high government deficit on top of endless borrowing is not wise.