Hong Kong, S. Korea, Taiwan and Singapore were able to escape a possible middle income trap (MIT) by growing fast. Malaysia, China, Thailand, other developing Asia seem to be trapped already. How to escape this trap?

The Economic Freedom Network (EFN) Asia conference on Asia, Middle Income Trap and Economic Freedom will be held in two weeks, October 21-22, 2013, in Bangkok, Thailand and I will be there. Today, I read three papers about the subject. 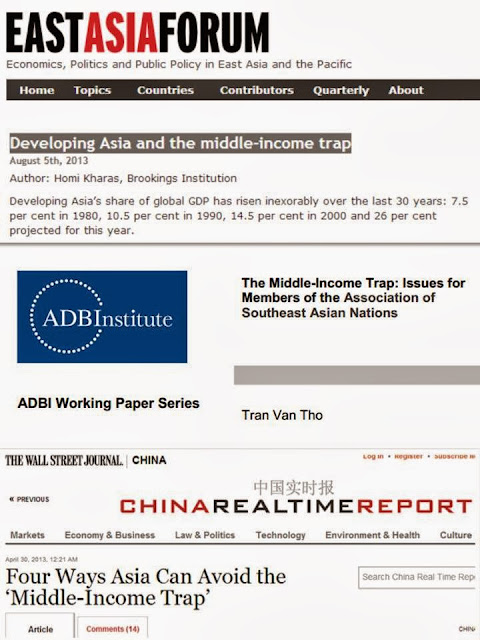 The first paper is from the East Asia Forum, Developing Asia and the middle-income trap dated August 5th, 2013 and written by Homi Kharas. It says,

At its heart, the middle-income trap is a governance failure: an inability to take a long-term view of the best way forward for society as a whole. Avoiding the trap can take careful preparation and implementation over a decade or more. Building top-tier universities, forming fair, transparent and accountable public institutions.... Politically, the shift from the ‘rule of man’, where an enlightened leader can be relied upon to make the right choices, to a ‘rule of law’, with institutional structures that produce predictable and sound decisions, is hard to accomplish. But unless middle-income Asian countries take the long view and change course they could fall, like many Latin American countries, into middle-income traps of their own making.


I like that. The author has hammered the importance of having accountable public institutions and having a rule of law, not rule of men, to enable economies to escape the MIT. 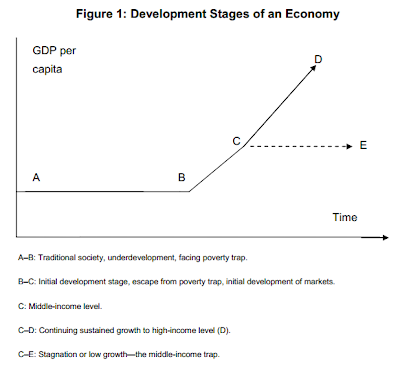 The second paper I checked is from the ADB Institute, The Middle-Income Trap: Issues for Members of the Association of Southeast Asian Nations published in May 2013 and authored by Tran Van Tho. The paper (31 pages) has some good conceptual framework, lik this one. A country or an economy must aspire to attain the C-D growth path. 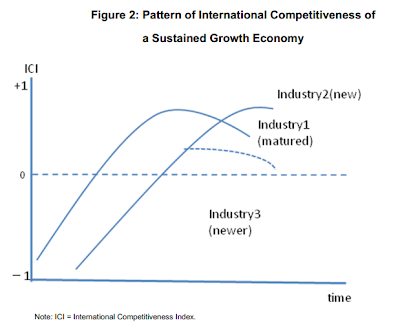 Another good framework from that ADBI paper, using the evolution of new, higher skilled industries, as benchmark for an economy's transition to higher income and hence, escape MIT.

But its definition of International Competitiveness Index,
ICI = (X-M) / (X+M), looks problematic. The denominator can become so big as it is total trade, sum of all exports of goods and services less imports (X+M) while the numerator can approach zero for those with balance trade (X = M).

1. Invest in infrastructure.
2. Guard against excessive capital inflows.
3. Boost spending on research and development and post-secondary education.
4. Get more women into the workforce and raise the retirement age.

It is typical for the IMF, along with the UN, WB, ADB, etc. to have central planning thinking. While the above measures are important, there are more important Entrepreneurship by nature is largely dynamic, spontaneous and subversive to existing businesses. Just (a) protect investors' (big and small) private property and investments, enforce contracts without favor, (b) do not over-bureaucratize and over-tax them and allow economic freedom. And growth should be everywhere, from infrastructure to telecomms, energy, shipping, airlines, land transportation, water, real estate, etc. And countries can grow faster and escape MIT.


I am excited to hear the various presentations on this subject during the EFN conference just two weeks from now.
-------------