Despite the incoherent rants against the country’s water, telecom, and electricity companies by President Rodrigo Duterte in his State of the Nation Address (SONA) 2020 last week, one good thing in his speech was the absence of reference to climate alarm and the need for more mandates, more subsidies to renewables which would mean more expensive electricity.

Recently, public attention has temporarily shifted from coal-bashing to entertaining nuclear energy including the possible revival of the Bataan Nuclear Power Plant (BNPP). See these recent stories in BusinessWorld:

For people who oppose fossil fuels (coal, gas, oil) and yet are scared of intermittent, unstable, weather-dependent solar-wind and other variable renewables, nuclear power would be the compromise for them. Many rich and developed countries in the world continue to use nuclear power. France remains the most nuclear-dependent country in the world with 72% of their total electricity generation in 2019 coming from nuclear, followed by Ukraine (54%) and Belgium (47%). For renewables, the Philippines’ 13.1% share to total is largely from geothermal and hydro as wind-solar combined contribute only about 2.5% of total (see the table). 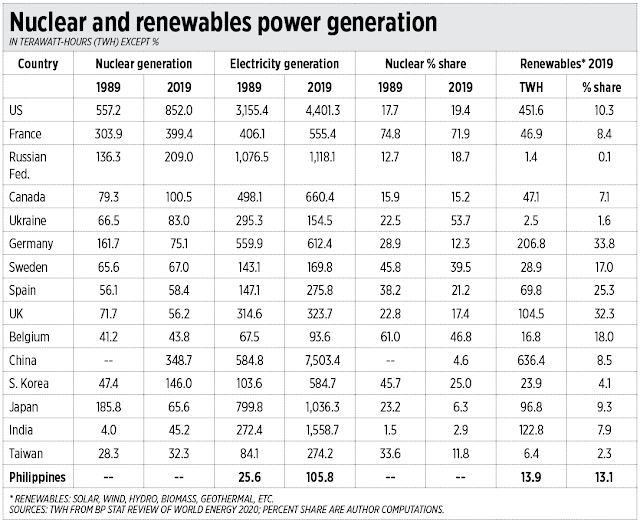 Currently these island-provinces are dependent on big gensets running on diesel (more costly, more polluting) then pass the higher cost via Universal Charge for Missionary Electrification (UC-ME) at P0.156/kWh charged to all electricity customers nationwide. By having small nuclear plants with cheap, stable, 24/7 electricity, these provinces can attract more businesses especially in tourism and agri-business, create more jobs, and that burdensome UC-ME subsidy can finally be abolished and this will help bring down overall electricity cost nationwide.

For the main islands of the country, coal and indigenous gas will remain competitively priced. Global coal prices have been low recently, only about $55/ton from late April to July 2020 versus $70-$110/ton from September 2016 to March 2020. Global gas prices have also been low recently, but liquefied natural gas (LNG) can be costly overall because of the higher cost of storage for liquids (unlike storage for solids like coal) plus the additional cost for re-gasification before the gas power plants can produce electricity.

The feared “more deaths in 2020 due to COVID-19” compared to previous years so far is wrong and did not happen. Possible explanations are: 1.) under-reporting of deaths in May-June 2020 which will be reported later; 2.) fewer fatal accidents, especially involving motorcycles, less stabbings/shooting in bars due to the community quarantines and curfew; and, 3.) people are more health conscious now, wash hands more frequently, avoid “unhealthy” food and drinks, and so on.

But reasons Nos. 2 and 3 are not justifications for the continuing, indefinite lockdown. The business shutdowns, millions of job losses, economic contraction, high public borrowings, and high taxes later are dangerous and can lead to more poverty-related illnesses and deaths.
--------------