During President Rodrigo Duterte’s State of the Nation Address (SONA) 2020 last Monday, he lashed out again at the Lopezes and other conglomerates and companies:

1.) Telecom: “… if you are not ready to improve …I might just as well close all of you and we revert back to the line telephone at kukunin ko ‘yan, i-expropriate ko sa gobyerno (and I will get them, I will expropriate that for the government).”

2.) Innovator pharma: “…Executive Order No. 104, which imposed ceilings on the retail prices of at least 133 drugs and medicines…”

3.) Water concessionaires: “… I would insist that you pay the billions and billions that you collected. For example, water treatment. O, nandiyan sa kontrata (It is in the contract). It’s in the billing, they are being collected since 1997. Ilang bilyon na nga wala ni isa (How many billion and there is not even one), not even a faucet was built for a water treatment facility.”

4.) Electricity: “This is the oligarchy that controls the Philippines by… taking control of the water and the electricity and power.”

These four sectors alone would involve tens of billions of dollars of private investments, local and foreign, to put up and maintain. By threatening them with government expropriation and imposing price controls, the President is sending a message to the international investment community that he can arbitrarily change rules midway at anytime and penalize certain businesses.

Two pieces of investment data here. Foreign direct investments (FDI) inward stocks to reflect yearly inflows minus outflows over time, data from the UN Conference on Trade and Development (UNCTAD) World Investment Report (WIR). And stock market capitalization, data from the World Federation of Exchanges (WFE). Until today, the Philippines is the least attractive to FDIs and portfolio investments among major economies in the Asia-Pacific (see the table). 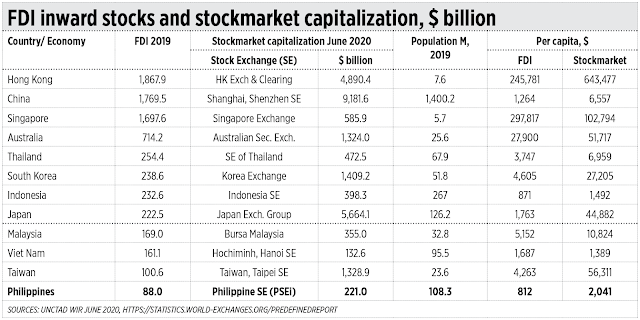 On a per capita basis, the Philippines has the lowest in FDI inward stock and third lowest in stock market capitalization. This is not something to brag about and the President should be aware of the implications of his whimsical pronouncements.

The Maynilad and Manila Water concessions in particular — the President has demonized them since December 2019 and arbitrarily canceled the contract extension from 2022 to 2037. The privatization of Metropolitan Waterworks and Sewerage System (MWSS) in 1997 into two areas was due to an admission by the government that it did not have the financial and technical resources to significantly improve water supply delivery to the people of Metro Manila and nearby cities.

Of the estimated eight million customers in 1997, only 26% had 24-hours water supply, and non-revenue water (NRW) due to leaks and theft was 62%. By 2019, water customers had doubled to 16.5 million and 96% of them have 24-hours water supply, NRW has declined to only 19%, meaning higher water pressure for consumers. Plus 100% sanitation coverage and over 50 new wastewater treatment plants which brought waste water coverage from almost zero to 30% of the metropolis. The capital expenditures (capex) to make these drastic improvements should be at least P300 billion.

And more investments will be needed because of two big challenges: rising urbanization and customer base, and stricter environmental regulations. The new Department of Environment and Natural Resources standards for biological nutrient removal are more stringent than the European Community standards. The estimated costs to comply with these new standards is around 30% on both capex and operating expenses.

And why should the contract extension to 2037 proceed, and not be arbitrarily canceled and abrogated?

Because in the last rate rebasing exercise by the MWSS Regulatory Office, the required combined capex of both concessionaires to complete the targeted water and sewerage systems by 2037 would amount to over P465 billion. The Clean Water Act plus the Supreme Court Mandamus have jointly raised the requirement from 50% to 100% sewerage coverage.

Government is now borrowing left and right to re-stimulate the economy. It is not prudent to borrow even more if it will re-nationalize the water sector in the metropolis and do the huge capex. And why should taxpayers from northern and southern Luzon, Visayas, and Mindanao, pay for the continued water supply improvement of people in Metro Manila?