Governments around the world have to grapple with raising new revenues because their lockdown policies have crippled the businesses and people that pay them regular taxes while they expanded public borrowings. Raising tax rates would appear very insensitive — the likely direction is to cut taxes to help ailing businesses and this might lead to a new round of tax competition among neighboring countries and economies.

The Philippines, through the Department of Finance (DoF) has proposed a drastic reduction in the corporate income tax (CIT) under the Corporate Recovery and Tax Incentives for Enterprises Act (CREATE) bill. The current 30% will become 25% in the year of its legislation, then there will be a 1% per year reduction starting 2023 until it reaches 20% in 2027. Very good move by the DoF, among the few instances where I support them.

Five major East Asian economies have CIT of 16.5% to 20% — HK, Singapore, Thailand, Taiwan, and Vietnam. When the Philippines attain the 20% CIT by 2027, these economies may cut their rates further. Indonesia had a CIT of 25% until 2019 and brought it down to 22% this year — the law was made before the pandemic.

The Philippines’ high CIT and withholding tax for dividends, interest, and royalties, are among the disincentives for the entry of foreign direct investments (FDI) which is the lowest among the country’s more mature and developed neighbors. Our FDI inward stock (net of inflows less outflows through the years) was only $88 billion in 2019 (see the table). 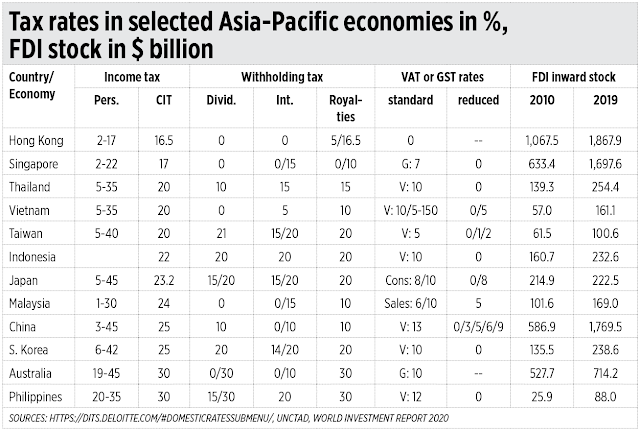 Aside from lower CIT, the CREATE bill has two other important provisions — lengthen the net operating loss carry over (NOLCO) from three to five years, and maintain the 5% gross income earned (GIE) up to nine years with the sunset period changed from two to seven years to four to nine years. Corporate losses this year can be carried up to the next five years under the NOLCO to reduce tax liabilities of companies, assuming they have survived these horrible, strict, indefinite and no timetable lockdowns which have crippled if not killed thousands of SMEs already.

Speaking of discouraging or disallowing tax exemptions, there is one sector that has a horrible lobby, the electric vehicles (EVs, those e-cars, e-UVs, e-bikes, e-trikes…). They want their EVs to have exemptions or reductions on import tariffs, excise tax, and VAT; they also want exemptions on import tariff and VAT for their charging equipment. Plus various non-fiscal incentives.

When the government wants more revenues and you exempt some sectors from tax, this means you will have to hike taxes of other sectors — bad. The TRAIN law imposed higher excise tax rates for petroleum products and the regular cars, UVs, but the EVs want zero tax — how horrible and crony-like could that be?

Meanwhile, the Department of Health — initiated drug price dictatorship policy has wreaked havoc on the financials of innovator pharma — the companies that produce new medicines, new vaccines — while favoring the non-innovator, generic, and local pharma. Criteria #4 of EO 104 imposes price controls on innovator, more effective, more-prescribed medicines hoping that there will be product pull out so that the less effective, less-prescribed medicines by local pharma will be left to make more money.

Some lessons and conclusions that can be derived from the above discussions are the following: One, improve revenue efficiency via lower tax rate with little or few exemptions in CIT, withholding tax, VAT, others. Two, ignore the EVs tax exemption lobby, and slap them with existing import and excise tax rates as regular vehicles. Three, price controls for one group of manufacturers and favoritism for another group is plain cronyism. And, four, have the rule of law always, the law applies equally to unequal people and sectors. Tax hikes or tax cuts or zero taxes on one sector should apply to all other sectors or sub-sectors.
----------------