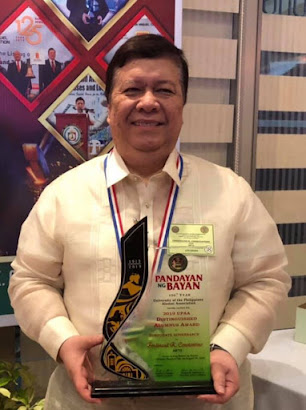 This is a delayed post about the lecture by a fellow UP School of Economics (UPSE) alumni, Mr. Ferdinand "Ferdie" K. Constantino, the Chief Finance Officer and Treasurer of the largest business conglomerate in the Philippines, San Miguel Corp. (SMC). Ferdie gave a talk at the UPSE Alumni Association (UPSEAA) last September 13, 2019 held at the SMC HQ in Ortigas. This photo I grabbed from his fb page when he received the UP Alumni Association (UPAA) distinguished award in 2019.

Unlucky for me, I wasn't able to hear his lecture because it was raining so hard that afternoon till evening, traffic was horrible, I didn't drive and I took the bus. The bus took 1+ hour traversing Ayala Ave alone in Makati to reach Edsa, then another heavy traffic in Edsa. When I arrived at SMC, people were already leaving, Ferdie was still there, we have a short chat, I was served nice dinner, plus San Miguel beer of course.

Ferdie's topic that day was SMC infrastructure. 2019 saw traffic congestion worse than previous years and Ramon S. Ang (RSA), SMC's President and COO already proposed an elevated tollway in Edsa. Really a radical idea considering that Edsa is always full of vehicles and there is an MRT railroad in the middle.

Ferdie said he shared info that they give to their investors, the ppt they cannot send by email to non-investors, ok with me. He sent me the SMC Annual Report 2018. It's old to write now, I checked the Annual Report 2019, it's available, https://www.sanmiguel.com.ph/files/reports/SMCAR_2019_0723A_finalweb.pdf. 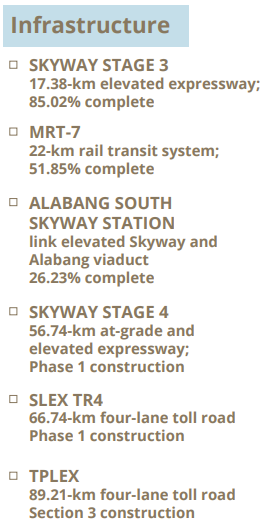 This somehow summarizes their biggest infra projects. Skyway stage 3 is very important, it will help decongest Edsa and other roads in Metro Manila because vehicles from the south (Calabarzon, etc) going to the north (Central and Northern Luzon) and vice-versa can just travel at SLEX - NLEX direct.

MRT 7 is also important because it will serve so many passengers from Fairview, QC and bordering municipalities of Bulacan (via Commonwealth Ave., Regalado Ave., etc) down to Manila. Partial operation by 2021.

The SLEX–TR4 from Sto. Tomas, Batangas to Lucena City in Quezon province.

SMC has other big projects. Foremost is the New Manila International Airport in Bulacan, P740+ billion or 3/4 of a trillion, huuuuuge. The Concession Agreement was signed with government last September 18, 2019.

They are also building a new passenger terminal in Boracay airport. Plus another radical proposal -- build a bridge from Panay mainland, Malay, Aklan to Boracay island. RSA and Ferdie should be sipping something extraordinary which makes their minds think of really radical, game-changing infra projects -- using private money 100%, no cost to taxpayers.

SMC also into power generation, they are in fact the biggest genco in the country, bigger than Aboitiz, FirstGen, Ayalas, Meralgo Gen (MGen), etc. Their new projects are a new unit of Masinloc Power Plant in Zambales, Battery Energy Storage System project.

Also in water distribution, the Bulacan Bulk Water Supply Project that supplies potable water to 12 out of 24 Bulacan municipalities.

The other day I saw this report, 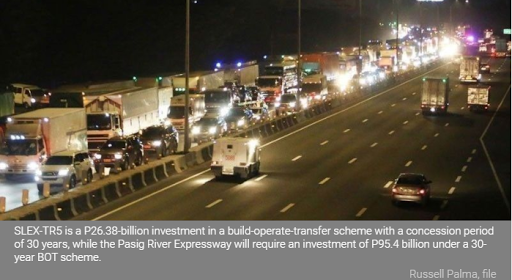 “The two projects are the South Luzon Expressway Tollroad 5 (SLEX-TR5), a 420-kilometer project from Lucena in Quezon to Matnog in Sorsogon, and the Pasig River Expressway, a 19.40-km road project that will connect Metro Manila’s eastern and western sections.

SLEX-TR5 is a P26.38-billion investment in a build-operate-transfer scheme with a concession period of 30 years, while the Pasig River Expressway will require an investment of P95.4 billion under a 30-year BOT scheme.”

I quickly pm’d Ferdie to express my big surprise and support. SLEX to Matnog, the last town of Luzon island in the south, facing Samar-Leyte islands. Wow as in wow.