Thanks to Benny Peiser and The Global Warming Policy Forum (http://www.thegwpf.org/) for these news clips of what's happening in California energy. I repost the titles and links of 19 reports and stories below. Enjoy.
----------------

Even as California reduces its reliable sources of power, notably nuclear and national gas, it is mandating a statewide shift to all-electric medium- and heavy-duty trucks starting in 2024, with the goal of reaching 100 percent of all new sales, wherever feasible, by 2045. On top of other electrification mandates for light-duty cars and buildings, the new truck rule will further increase the state’s demand for electricity and raise rates, already among the nation’s highest. Since 2011, electricity prices have increased five times as fast as the national average. In 2017 alone, they increased at three times the national rate.

(1) Recall Deja Vu: CA Rolling Blackouts are Back
It’s not easy being green
By Katy Grimes, August 15, 2020 10:06 am
https://californiaglobe.com/section-2/recall-deja-vu-ca-rolling-blackouts-are-back/

So why are California’s utilities cutting power, and imposing rolling blackouts again?
It’s political. And it’s corrupt.
The state is awash in ultra cheap natural gas, yet in California, our corrupt government finds ways to create an energy shortage, and charge rate payers the highest rates in the country.
This is one reason California electricity costs more than twice the national median—thanks to a government-created shortage.

But the underlying reasons that California is experiencing rolling black-outs for the second time in less than a year stem from the state’s climate policies, which California policymakers have justified as necessary to prevent deaths from heatwaves….

And yesterday, California had to impose rolling blackouts because it had failed to maintain sufficient reliable power from natural gas and nuclear plants, or pay in advance for enough guaranteed electricity imports from other states.

California actually has installed electricity generation capacity of almost 76 GW.  That sounds like wildly more than you would ever need.  But the problem is that of the 76 GW of capacity, some 27 GW is solar, and 6 GW is wind… 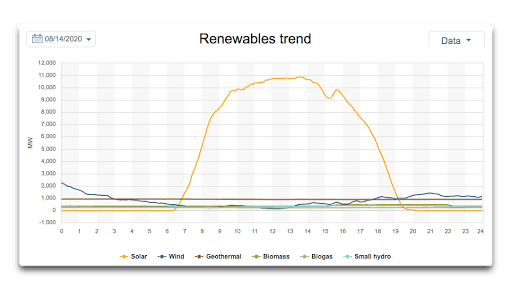 California last experienced rolling blackouts in 2001 amid energy market manipulation by speculators. This time the cause is energy market manipulation by anti-fossil fuel politicians. Democrats have mandated that renewables account for 60% of state electricity by 2030, which has forced power providers to invest in renewable energy sources now to meet the deadline. The result is something of a Rube Goldberg physics experiment.

People turn on air conditioning and other devices around 5 p.m. as the heat peaks and they come home from work. Electricity demand surges, just as the sun is setting and solar power is drying up.

Rothleder said that the ISO, which functions as a kind of air traffic controller for the grid, makes up for that lost solar power by importing electricity from dams and power plants in other Western states and also by relying on natural gas-fired power plants still operating in California.

Sierra Club and other activists met informally with Newsom’s administration in 2019 to discuss dramatically slashing the state’s oil production, The Los Angeles Times reported in April of that year.

The underlying reason blackouts are occurring is because California lacks reliable, in-state supply. And the reason for that is California has been closing both natural gas and nuclear power plants.

"People wonder how we made it through the heat wave of 2006,” said Berberich. “The answer is that there was a lot more generating capacity in 2006 than in 2020.... We had San Onofre [nuclear plant] of 2,200 MW, and a number of other plants, totalling thousands of MW not there today."

As part of global warming efforts, officials want all citizens to switch their natural gas stoves and furnaces to electric models. More than 30 California cities have enacted bans on gas appliances, including the major cities of San Francisco and San Jose. Almost 10% of the state population now lives in an area covered by restrictions against gas appliances in new residential construction.

California also wants residents to transition from gasoline- and diesel-powered cars and trucks to plug-in electric models. So, when those blackouts occur in the future, not only will your lights and air conditioners fail, but you won’t be able to cook your food or drive your car either.

“On Saturday night,” said Berberich, “we were within an hour of being able to service the load without incident…We lost a 400 MW [power station] unit and, the wind had been every good, but ran out. If the wind hadn’t run out on us, we would have been ok.”

The Golden State’s ambitious renewable portfolio standard is coming under fire as the state’s energy grid buckles under the strain of an oppressive heatwave, prompting rolling blackouts that have left millions without power as the state moves to replace nuclear and natural gas as energy sources with solar and wind.

California seeks to generate 60% of electricity via renewables by 2030, but Mr. Biden’s Green New Deal is even more aggressive, calling for a 100% carbon-free grid by 2035 “to meet the existential threat of climate change while creating millions of jobs with a choice to join a union.”

On Monday, grid operators warned they would have to cut power to as many as 10 million people, which would have been one of the largest outages in California’s history. But that crisis was averted as consumers throttled back their energy use. Advisers in the governor’s office made personal telephone calls to refineries, industries and the state’s port authorities, asking them to reduce their power consumption, said Steve Berberich, chief executive officer of the California Independent System Operator, which runs the grid.

(12) The Year the Lights Went Out in California
Christopher Horner • 18 Aug, 2020
https://the-pipeline.org/the-year-the-lights-went-out-in-california/

The insult to their own self-inflicted injuries is the demand that the rest of the country suffer under it, as well. Call it the “Green New Deal” though, like most flops, it has already been re-branded, as “Net Zero.”

The climate agenda is not an agenda that claims it will impact the climate, so let’s get that out of the way up front. “Climate,” in policy terms, means imposing energy scarcity.

(13) Renewable Mandates Are Leading to Electricity Shortages and Price Spikes in California
BY IER   AUGUST 18, 2020
https://www.instituteforenergyresearch.org/the-grid/renewable-mandates-are-leading-to-electricity-shortages-and-price-spikes-in-california/

California’s blackouts are a product of its politically-determined reliance on intermittent, unreliable renewable energy, not a product of heatwave….

Americans need to be aware of Joe Biden’s Clean Energy Standard, which would put them in the same position as Californians, who are reliant upon intermittent wind and solar power. This episode should be a wake-up call for politicians thinking of jumping on the green energy bandwagon; it appears the wagon is headed for a cliff.

Mr Berberich said his agency had warned the California Public Utilities Commission for years of inadequate power during times of maximum demand. “The situation we are in could have been avoided,” he said....

(15) California Doomed to Frequent Blackout Risk by Battery Shortage
The state’s electric grid operator said it needs to buy 12 gigawatts of battery storage. That’s a whole lot more than it has right now.
By Will Wade and Brian Eckhouse
August 19, 2020, 11:18 PM GMT+8 Updated on August 20, 2020, 12:06 AM GMT+8
https://www.bloomberg.com/news/articles/2020-08-19/california-doomed-to-frequent-blackout-risk-by-battery-shortage

California’s grid operator estimates that as much as 12 gigawatts of batteries would eventually be needed to store enough renewable energy to help maintain the balance between supply and demand. That’s a huge jump from the more than 500 megawatts worth of batteries operating in the state at the end of last year. At about $400 a kilowatt-hour and using 4-hour batteries, the entire effort could cost California close to $19 billion, according to Toby Shea, a senior credit officer at Moody’s Investors Service.

Investments in electricity storage and distribution would do the trick, Kammen said. But those could be expensive, and even harder to budget for at a time when the state faces huge deficits amid the pandemic-related slowdown.

California also may have to consider extending the lifetime of its last nuclear power plant in Diablo Canyon. The plant is currently scheduled to close by the end of 2025, and keeping it open would likely face staunch resistance from environmentalists and politicians.

Caiso in part blamed cloud cover, weak winds and failures at a couple of power plants for this weekend’s power outages. But this happens when you rush to shut down power plants to meet government diktats and reduce the amount of reliable baseload power. Unlike fossil-fuel plants, solar and wind can’t ramp up quickly when other power generators go down.

California doesn’t have enough reliable power — which is to say fossil-fuel and nuclear energy – because it depends on intermittent sources like solar and windmills. California is what happens when quixotic political aspirations smother economic reality. I’m skeptical that most Americans – even Californians – will be willingly to roll back modernity for long. We’ll see.

We have enough experience with green technologies to know they don’t run on solar and wind, they run on subsidies. Ontario ruined its electricity cost advantage by hitching its grid to long-term renewable energy developments that were only viable on the basis of above-market payments financed by surcharges that have imposed a heavy cost across the economy. Empty promises of green jobs ran up against the reality that money-losing projects destroy more jobs than they create.
----------------

Posted by Bienvenido Oplas Jr at 1:31 AM