From 2016-2018, pneumonia killed on average about 57,000 people per year in the Philippines. It is the fourth most deadly disease in the country next to heart diseases, malignant neoplasms/cancer, and cardiovascular diseases.

Technology Assessment Council (HTAC) conducted a study and a report was released last week, on July 1, entitled “Reassessment of 10- versus 13-valent Pneumococcal Conjugate Vaccines (PCV) in the Philippines: Evidence Summary.”

The paper’s Figure 3 chart is useful because it shows projected avoided or averted cases/sicknesses and deaths of the two vaccine types compared with no immunization.

Then Table 4 shows the yearly and total costs of both vaccines under multiple dose and single dose methods (MDV) and (SDV). I computed the difference in benefits (averted cases and deaths) and the yearly average cost, the result is interesting (see the table). 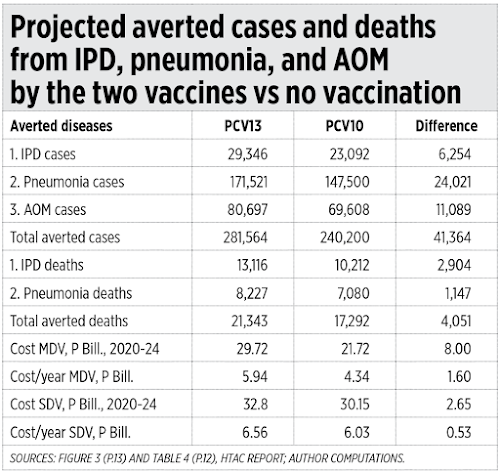 This means that for an extra P1.6 billion per year of MDV (the HTAC’s preference) PCV13 can avert or avoid 41,364 cases more of IPD, Pneumonia, and AOM than PCV10. Plus save 4,051 lives from IPD and pneumonia than PCV10.

Is this a good trade-off between public spending and public health? How do we know?

In 2019, the Philippines had a GDP of P18.613 trillion, collectively contributed by 43.15 million employed workers, professionals, and entrepreneurs. This means that on average, each employed person contributed P431,356 to the economy last year.

Assuming a person pays a total of 35% of their income in tax to the government (personal income tax, VAT, excise tax, withholding tax, vehicle registration tax, etc.), the person has paid nearly P151,000 in taxes to the government. Plus P280,000 of spending or savings for himself/herself and the family, friends. In just one year.

So with more than one year of work, the person whose life has been saved by a vaccine like PCV13 can already pay for the extra public spending.

Ergo, spending extra tax money to save extra lives is worth it. Procurement of more expensive but more life-saving PCV13 will be more beneficial to both public health and the macroeconomy.

The HTAC Report observed that: “Modeling suggests that PCV 13 may result in larger savings with a potentially greater number of averted cases and/or deaths due to IPD, clinical pneumonia, and AOM compared to PCV10 as a result of greater serotype coverage (Figure 3). This is also with the assumption that the government would pay for the vaccines. With this, the Council recognizes that PCV13 use will incur lesser household financial impact as compared to PCV 10.” (Page 13 HTAC Report)

But it did not specifically recommend either vaccine, only the 11 serotypes that must be addressed. This is an implicit proposal to downgrade use of PCV10.

When the DoH shifted to use PCV13 in 2014, it was backed up by a study by Dr. Issa Alejandria, an infectious disease specialist and clinical epidemiologist at the UP College of Medicine who made a comparative study of the two vaccines. Among her findings are: 1.) PCV13 has helped avert 379 more cases of IPD, 8,044 more cases of pneumonia, and 54,675 more cases of AOM, for a total of 63,098 cases more than PCV10. And, 2.) the former vaccine helped prevent 495 more deaths.

So, considering the high number of averted cases and deaths, the above observation by HTAC Report, and the previous study by Dr. Alejandria, better protection of public health can be done by using PCV13. Controlling infectious and virulent diseases should be a priority now as shown by the current public scare of this infectious COVID-19 virus.