This year marks several important global milestones in macro-economy and the energy sector. These include the coveted $100 billion/year of climate money starting 2020 as promised by the rich countries to poorer countries during the Paris Agreement in 2015, and steep decline in global GDP growth and energy demand because of the various lockdowns by many countries in response to the COVID-19 pandemic. The world hit an all-time high primary energy demand of 584 Exajoules (EJ, 1 EJ = 23.88 trillion tons oil equivalent, or 277.78 tera-watt hours, TWH) in 2019, up from 576 Exajoules in 2018.

Despite the economic hardships worldwide with many rich countries expected to have GDP contraction anywhere from -2% to -10% this year, many leaders in poor countries, big environmental NGOs, and renewable firms demand that the $100 billion/year should be given to them. The money will largely finance energy transition from fossil fuels especially coal, to intermittent renewables especially wind-solar, to reduce global CO2 emissions.

This is a simplistic and parochial goal and does not look at global economic realities that countries and economies have developed and modernized as they used more fossil fuel energy. I compared two decades of GDP (2019 are estimates by the IMF World Economic Outlook, WEO) and CO2 emissions. The positive correlation is very clear: countries with at least 2x expansion in CO2 emissions have at least 4x expansion in GDP size (see the table). 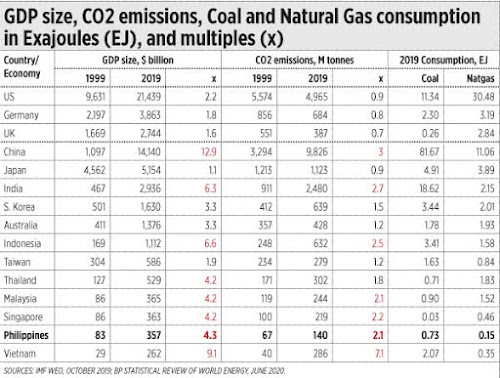 Now there is endless pressure for the Philippine government to hasten the transition away from coal and move towards wind-solar plus more use of natural gas, imported LNG once the Malampaya gas is exhausted in a few years.

Go back to the table : the Philippines’ coal consumption in 2019 of only 0.73 EJ is similar to those in Thailand and Malaysia, less than half of Taiwan, only 1/3 of Vietnam, 1/5 of South Korea, and 1/7 of Japan. Ours is not big, not scary or Frankensteinish so that exit from coal should be hastened or even desirable.

The natgas lobby is correct in saying that our gas consumption is small. As shown in the table above, our gas consumption was only 0.15 EJ in 2019, that is because we only rely on domestic supply from Malampaya gas field. Lobbying for imported LNG, even having nuke power, more big hydro, can be done without calling for killing coal power.

It is also notable that anti-coal Greenpeace has also turned anti-natural gas too on the ground that gas has high methane emission.

The Philippines with 109 million people remains to have a small GDP size of only $357 billion in 2019, comparable to Singapore with only 5.7 million or Malaysia with 33 million people. We need to expand our economic size fast, and a big supply of energy at cheaper or competitive prices will be badly needed.

How about the environment or the planet?

CO2 is not an evil pollutant gas as what we often hear or read. CO2 is the gas that humans and animals exhale, the gas that plants and crops use to produce their own food via photosynthesis. It is a useful gas so that more CO2 leads to more trees regenerating naturally, and more food production.

Meanwhile, there is a new paper published by Ateneo de Manila University on June 23, “COVID-19, Coal, and the Energy Transition in the Philippines” by Dr. Majah-Leah V. Ravago and Dr.James A. Roumasset. They concluded that “FIT subsidies are actually retarding investment relative to free market levels. Using COVID-19 to justify further subsidies is likely to be counterproductive, in spite of recent proposals to extend the feed-in-tariffs. A better approach is for government to facilitate faster approval of unsubsidized projects.”

Right. More subsidies for solar-wind, higher excise tax for coal to make it artificially more expensive, and exempting gas from excise tax to make it look cheaper, are three sides of wrong, anti-consumer policies. Consumers, not government or environmental NGOs or RE lobbies should decide the appropriate energy mix.
----------------