The size and weight of a government (Expenses) is directly proportional to the taxes and fees (T&F) to be paid by the citizens to sustain a particular government plus borrowings (New Debt) if the fiscal gap is unsolved. Or put simply,

If the economy has matured and its economic managers have realized the ugliness of endless borrowings and endless fiscal irresponsibility, public debt will slowly decline. That is, 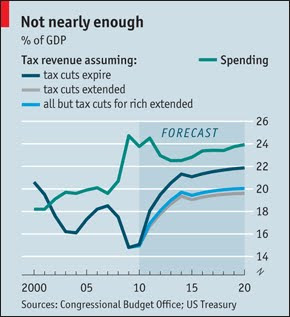 In the US, Mr. Bush Junior's certain tax cut legislations will expire this year and the next. So legislators there discuss whether to extend the tax cut or not. This is the projected picure of US' fiscal situation under certain scenarios. Graph from The Economist, Seotember 16, 2010 issue.

The main issue here, at least for me, is why (federal) spending will keep increasing -- up to 24 percent of GDP by 2020 -- even if tax revenues will decline. The immediate result is of course more borrowings to keep up with ever-rising spending. And more borrowings mean more debt payment in the future, both for the principal and interests.

A tax cut coupled with some spending cut, is tbe most appropriate policy measure to encourage private households and corporations' additional spending. Someone's spending is somebody else' income. And this will have a positive spiral effect on the economy. If a government will keep punching a hole in the citizens' pockets, there will be less spending that the citizens can do, unless they also borrow their government's attitude of living beyond one's means. Which will worsen the situation, dragging the economy into bigger fiscal and personal debts. The bigger the debts as a share of income, the bigger the risk of debt default in the future.

I think the US government has lots of assets to dispose and privatize to help reduce the public debt stock. This will have dual positive impact of reducing the debt while keeping the tax cut. But I think this option is still not in the minds of many policy makers there, even among the public.

Oh, I share the same sentiments on why expenditure will increase despite cutting taxes. (but up to this time the US congress have not voted on it, right?)

And yeah, I guess its better for US to tap their remaining assets for privatization to pay for its debts.

i was wondering about how things like that work this days...

This news report says that the US' public debt of $13.4 trillion is grossly understated. If unfunded liabilities like pension and Medicare are included, it is expected to reach between $60 to 200 trillion.
http://www.news.com.au/business/breaking-news/us-government-hiding-true-amount-of-debt/story-e6frfkur-1225926567256#ixzz106MjZzOz