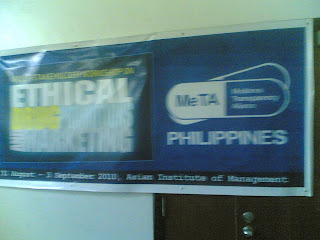 The Medicines Transparency Alliance (MeTA) - Philippines conducted a series of workshops for various groups and sectors on "Ethical Drugs Promotion and Marketing", August 31 to September 3, at the Asian Institute of Management (AIM) in Makati City. The workshop for civil society groups, consumer and patient groups, was held the other day, September 1, afternoon. Leaders of member-NGOs of the Coalition for Health Advocacy and Transparency (CHAT) like me attended the workshop.

The main resource speaker for all the workshop groups was Ms. Carole Piriou of Health Action International (HAI), a think tank based in Amsterdam. Carole gave a good presentation but I did not agree with some of her analysis and recommendations. We should get a copy of her powerpoint presentation in the coming days, but I took a photo of 2 of her slides. 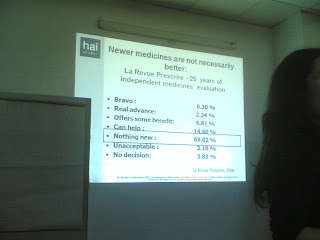 Here is one of the slides of Carole. Based on some HAI surveys or studies, they say that "newer medicines are not necessarily better" as 69 percent of new (and patented) drugs are "nothing new." This assertion should get the attention and counter-arguments of the innovator pharmaceutical companies because the purpuse of medicine innovation is to develop more disease-killer drugs, or retain the original disease-killing capacity but with the minimum adverse effects. That should be "something new." 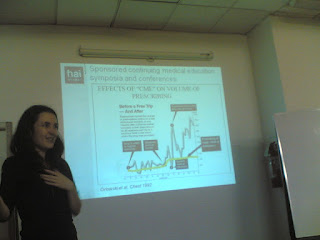 Another issue that Carole discussed, was that Continuing Medical Education (CME) via sponsored symposia and conferences by pharma companies for physicians have direct and positive correlations to increased prescription of the drugs produced by the sponsoring company.

I think that point is not surprising. I do not know if there is a neutral or independent body or organization that provides CME to physicians where all new drugs and vaccines from different innovator and generic pharma companies are presented and discussed in terms of their disease-killing capacity, any adverse effects, price, and so on.

In the absence of such independent group, then drug manufacturers will launch their own CME to certain physicians to explain about the properties of their new drugs. This has the indirect effect of active promotion and marketing, of course. If the manufacturers themselves will not do it and there is no independent body that will study and analyze the properties of new drugs coming out from different pharma companies, who will?

Dr. Kenneth Hartigan-Go, a former official of MeTA Philippines, now a professor of health management at the AIM, also gave a short presentation of the kind of promotions and marketing that some pharma companies advertise in media -- radio, tv, newspaper, and so on. The pictures that he showed were indeed very revealing. We hope to get a copy of his presentation in the coming days too.

An important consideration why many pharma companies resort to aggressive advertising and marketing, is because majority of Filipinos do not have outpatient health insurance card/organization. PhilHealth can be used only if one is confined for at least 24 hours. So since people do not have outpatient health insurance cards, they do not see a doctor for their minor diseases (fever, flu, headache, etc.) and get professional advice. People resort to self-medication -- like the drugs what they saw or heard on tv, radio, etc.

The biggest pharma company in the country is United Laboratories or Unilab. Its gross sales in April 2009 for instance, P25.8 billion, was slightly bigger than the combined sales of no. 2 (GSK), no. 3 (Pfizer) and no. 4 (Wyeth). Unilab is also the biggest drug advertiser in the country, its ads are visible in radio, tv, newspaper, billboards, and so on.

So, should government further regulate drug promotions to physicians and the public? My quick answer is No. When there is sufficient competition among various pharma manufacturers, among drugstores and among healthcare providers, that competition is the best regulator in terms of price, product quality, and corporate accountability.

Besides, the Food and Drug Administration (FDA, previously BFAD) has its staff over-burdened already with regulating everything from new (and/or imported) drugs to skin whiteners to fruit juices to processed/manufactured foods, drinks and soda, and so on. So to ask them to create a new set of regulations and monitoring system will simply raise public expectation and later, public disappointment.

Civil society organizations (CSOs) -- NGOs, people's organizations and coops, media, consumer groups, church groups, civic groups, etc. -- bonding into a big coalition can monitor drugs promotion and marketing. Then slam-dunk those firms that exaggerate the properties and healing power of their drugs. This public pressure and consumer vigilance is a more effective regulator than any combined government bureaucracies' regulation.
Posted by Bienvenido Oplas Jr at 12:24 AM

Hi Nonoy! While I agree that NGOs and the public can serve to regulate drug promotions, the fact remains that we still NEED to educate the public on what exactly drugs/medicines are, may it be OTC OR ETHICAL drugs. Until clear understanding on the nature of drugs and medicines happen, regulation on promoting them must be done. There are a lot of misinformation we see now in the many drug advertisements that mislead the public resulting to DRUG MISUSE. Result, disease complications happen unnecessarily.

Thanks for the reminder, Leony. I was also told by one pharmacist that giving away drugs for free by government or other sectors, if not done with supervision by a trained health professional like a pharmacist, will only result in irrational drug use and hence, might create more heatlh problems later on.

I agree with you on all points and I know some of the groups and some of the people whom you mentioned in your blog.

The junkets that some of the pharma companies have is beyond your wildest imagination. Unilab for example sends plane loads of people out of the country for each drug they have. And that is not a joking matter. After all, they are a "me too" company - with no investment at all in R&D.

Perhaps one day, we can talk about this over a cup of coffee and see how perspectives come to an agreement.

Thank you for commenting on my blog as well.