A London-based financial think tank, Z/Yen Group, released its Global Financial Centers Index (GFCI) 8 recently. The top 10 financial centers and their ranking are below. Numbers in parenthesis represent their rating as of September 2010:

In the GFCI7 released last March 2010 or just six months ago, Hong Kong's rating was only 739 while London and New York's ratings were tied at 775. 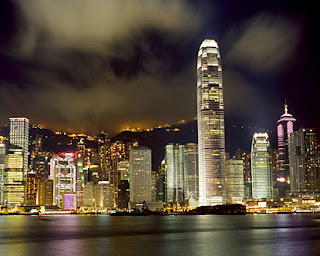 If current trend will continue, Hong Kong will overtake both London and New York by March 2011 in the GFCI 9.

Nonetheless, it's worth noting how 4 of the top 10 global financial centers are Asians. Shenzen and Seoul should not be far behind. Also New Delhi maybe.

The Philippines should learn from Hong Kong and Singapore capitalism. The important factor for these two dynamic economies is the low bureaucracies being imposed by their respective governments in businesses locating in their soil. Well, at least relative to the business bureaucracies imposed in other countries.

Filipino politicians and government bureaucrats should understand and appreciate that it is entrepreneurship and capitalism that creates jobs, that produce various goods and services in society -- from google and facebook to laptops and restaurants. It's not the state nor the bureaucracy.
------

Despite the recent global financial turmoil, American banks are still the biggest in the world. Here's the chart from The Economist, July 1st 2010: 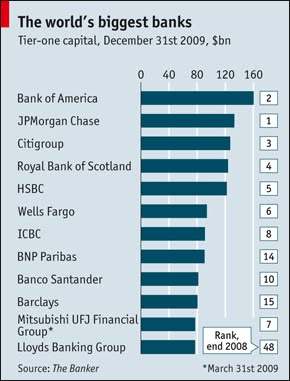 source: http://www.economist.com/node/16486707?story_id=16486707
Some sectors may argue that this was made possible by US government bail-out of some of those biggest banks, implying that US capitalism was saved by the US government.
Not correct. Not all banks in this list wobbled recently and for those that wobbled, not all of them got huge bail-out money from the US government -- or from their respective governments.
Corporate and banking expansion and bankruptcies are 100 percent part of capitalism. Government bail-outs will only encourage some irresponsible behavior from some of those big banks. Their warranty is that they are "too big to fail." Government bail-outs, therefore, is wrong and must not be used again.
(2) Market Market, Free Market
September 02, 2010 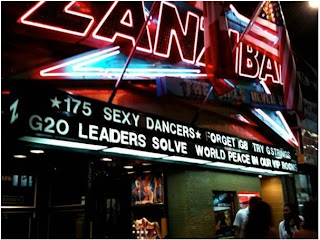 A Filipino friend, Tos A., posted "Fun snaps around the world" and among the photos there was this one from Toronto, Canada, during the last G20 meeting about 2 months ago. Tos called it "Solutions to market failure?" And I replied, "Wrong title Tos, it should be "Solutions to government failure." And perhaps a more appropriate title will be "Beerhouse solution to government failure." 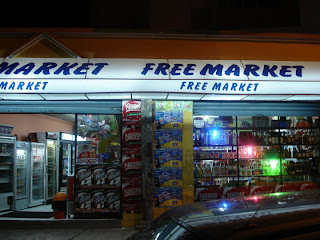 Here's another picture that Tos showed, from Quito. Right on! I like the name of that shop!! :-) In a free market, there is zero coercion. Sellers and buyers meet each other. If they do not agree to the price, the seller keeps his goods and services, the buyer keeps his money. One simply walks away until he/she finds the right seller or buyer and a transaction is made. 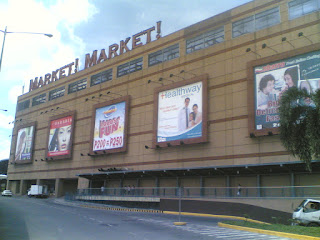 Here in Manila, we have a big mall with a similar name -- Market! Market! It's in Fort Bonifacio Global City, in Taguig City. 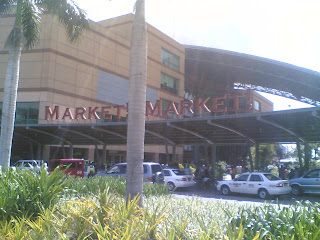 Market-market is just the English term for the Filipino variety shops called "Tiangge-tiangge". Deep bargain seekers flock to tiangge-tiangge shops as there are lots of choices, from clothes to jeans to shoes to electronic gadgets to food and drinks, and so on.
Sellers meet buyers. Producers meet consumers. Bargain hunters meet bargain traders. Zero coercion, zero forced collectivism, and there is order in society. There is a market for everyone, from the rich to the poor.
That's the beauty of free market capitalism.
See also: