Around late September 2005, the Atlas Economic Research Foundation, in partnership with the Friedrich Naumann Foundation (FNF) sponsored the historic "The Constitution of Liberty in Asia" roundtable discussion (RTD) in Phuket, Thailand. For one day, around 20 of us, free market leaders and individuals from Asia, discussed half of a thick book -- Friedrich Hayek's "The Constitution of Liberty". The event was held one day before the Economic Freedom Network (EFN) Asia conference in the same hotel in Phuket.

I say "historic" because of the many conferences that I attended, that one really deepened my perspective and understanding about liberty and the rule of law. 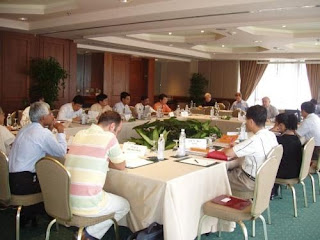 The discussion was facilitated by Atlas VP, Prof. Leonard Liggio, who is himself a scholar on classical liberal philosophy. Good friend Colleen Dyble, with Atlas at that time, provided the technical and administrative support to Leonard. Below was our group picture. 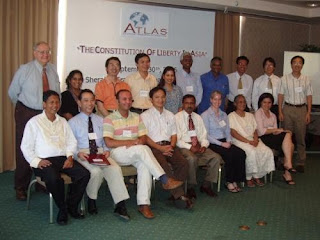 Likewise, the Cambodian Institute for Development Studies (CIDS) is not exactly a free market think tank, but its head, Kang Chandararot, deeply appreciates the value of advancing individual freedom in the course of public policy research work.

The event was 5 years ago now and some of us have worked in various institutes, Including some Atlas staff who already resigned and pursued new careers in other think tanks in the US. The Asian scholars who went there still have a lot of Hayek molecules in their body. Junning was once called the "Hayek of China", Nambiar and Wan Saiful Wan Jan of IDEAS may also be considered the "Hayek of Malaysia."

I missed, or we all missed, Jo Kwong there, VP for Institute Relations of Atlas. Although she put a lot of hours and effort in helping organize that forum from her office in the US, she was not able to join us. It's good that her very friendly and also hard-working deputy, Colleen, was able to join us.

After the Phuket RTD on Hayek, I formed the ARBM2Phuket yahoogroups. Initially we were about 20 there, then it expanded to its current list of 90+ liberty-oriented people we included more like-minded thinkers from Asia and other friends in Europe and the US.

Last nght, IDEAS organized a discussion about Hayek's thoughts on political economy, and it was led by Nambiar. IDEAS is doing that event every third Monday of the month. More details at their website, the Bukit Tunku Society.

Hayek was a great thinker. His ideas permeated into the minds of people who push the ideals of individual freedom and liberty. Among the words that the man wrote, I like this one: