Statement of UP President Alfredo E. Pascual on the incident involving DBM Secretary FlorencioB. Abad in UP Diliman

Posted on September 22, 2014 by upweb_wordpress in Announcements

A few days ago, a disturbing incident happened at the University of the Philippines Diliman.  A group of protesters, consisting of some UP students, confronted Department of Budget and Management Secretary Florencio B. Abad outside the UP School of Economics auditorium.  He was then leaving a forum, where he was one of the speakers.  According to media reports, Secretary Abad was subjected to verbal indignities and the protesters hurled “placards, crumpled papers and coins” at him.

The forum was organized by the UP Diliman University Student Council and the UP School of Economics Student Council to discuss the proposed UP budget. Reportedly, the forum also discussed the disbursement acceleration program of the government.

Secretary Abad, as an invited speaker in this UP student forum, should have been accorded the courtesy and respect due to all guests of the University. While UP constituents are free to actively express their views on issues that affect our nation, such as the proper use of public funds, UP does not condone the use of violence in any manner against any person, be it a member of the university community, a visitor, or a government official.

UP Diliman is now investigating the reported incident in accordance with the University’s rules, including the participation of people who are not affiliated with UP.

I have always maintained that as the country’s national university, UP must lead the debate on important issues confronting the country.  UP must also uphold the time-honored tradition of dissent vis-a-vis questionable government policies. But debate and dissent, while articulated with passion, require evidence-based and reasoned arguments, and civility to and respect for those who hold the opposite view.  Abusive words and deeds have no place in the hallowed grounds of the University.

Meanwhile, I am curious about the stand of the UP Student Council (USC), the co-organizer of the forum.

A friend said that the violent activists are part of the youth being "bold and wild". Maybe, but what do we call the UP students who  listened to the presentation by the Secretary, then form their own opinions to be expressed later as academic papers, tweets, facebook and blog postings, they are not "bold and wild"? I think we can call the latter as "bold, wild and wise" while the latter are "bold, wild and violent".

Put the government scoundrels and DAP architects in  jail, yes, I agree with that. But there is a process; bureaucratic and time consuming, politics tainted process. It can exonerate some people, or it can convict and  imprison them. Two former Presidents have been imprisoned already, Erap and Gloria, although the former was pardoned and set free. Three Senators are in jails already on corruption charges.

It is a bureaucratic but more transparent process, rather than throwing-shouting-body dragging process. If such acts by the activists can be justified, then similar acts by the counter-activists can also be justified. And we can easily go the uncivil mob rule. Whoever has more violent men and women can win an argument and rule.

Meanwhile, Bayaan Mo Na has issued statement. They are saying that he time for non-sober, violence-inspired discourse should be the norm. If you are a speaker in a public forum and they know your position before and they do not like it, they can wait for you outside, throw things and drag and hurt you if they want. 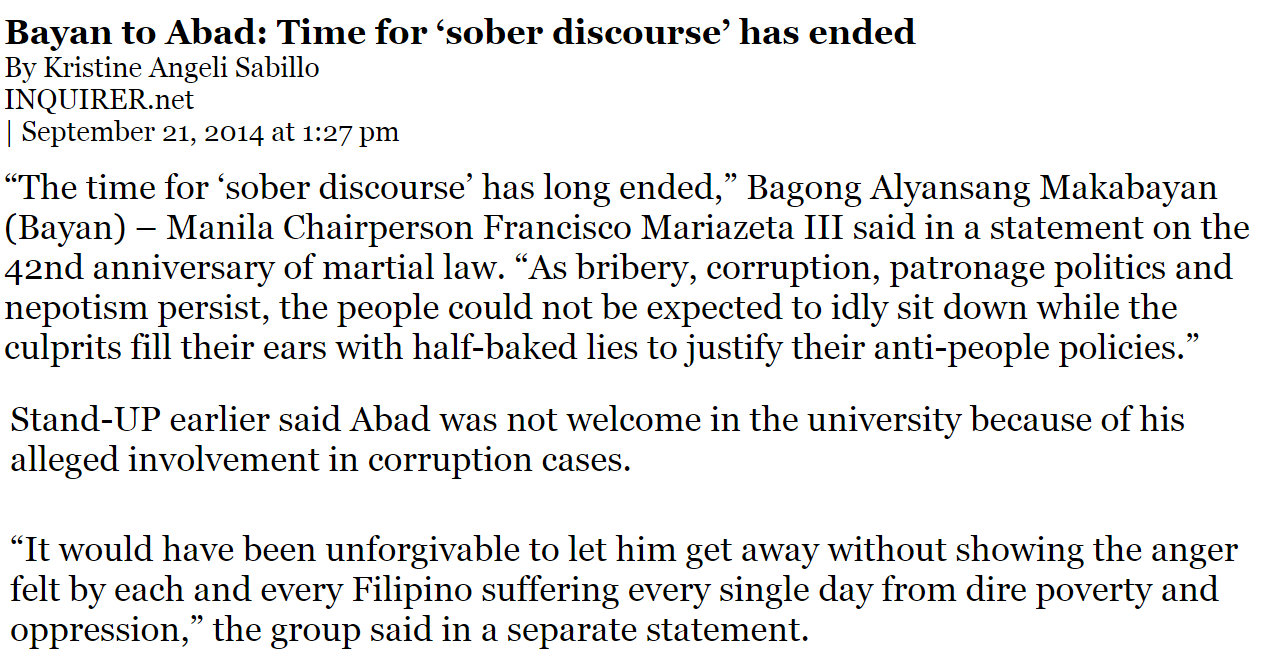 And the student activists involved in violence made this arrogant statement.


"Had we been intent on hurting him and disrupting the event, we would have barged right into the auditorium while he was prattling to students, mauling everyone who got in our way.

But with all the restraint our indignant group could muster, we waited for him outside because inside, in the so-called venue for dialogue, only five minutes were allotted for the open forum and questions from the audience were filtered. Contrary to what Abad would like everyone to believe that he was more than willing to engage with us, he wanted to evade us and even tried getting away through a fire exit and a window!UP President Pascual, instead of apologizing to Abad, should have given him a tip or two on how to dialogue with UP protesters. You stop in front of the crowd, speak, and facilitate a discussion. These, Abad never did or even attempted to do."