This is a continuation of Emotionalism, Violence and Stupidity: the Attack by UP Student Activists on Sec. Abad  earlier.


“Once I began approaching the Stand UP group, however, the protesters—who were around 50 to 60 strong—did not engage me in dialogue. Instead, they surrounded me aggressively as I made my way toward the vehicle. I had objects thrown at me, and one student even attempted to grab me by the collar.”

Abad was also pelted with coins and the collar-grabbing incident happened as he was getting into his car, according to other accounts gathered by the Inquirer.

The Secretary was still lucky because he was protected by UP's private security guards. Otherwise, he may have been dragged and punched. The event was organized by the UP Student Council (USC) and venue was the UPSE auditorium. The hooligans are reportedly from the Student Alliance for the Advancement of Democratic Rights in UP (STAND UP).

These minority violent activists -- the majority are non-violent, listened to his presentation, asked questions and more questions, and that's it -- maybe they were trained precisely for violence and stupidity.

Again, I am no fan of Sec. Butch Abad and the fiscal irresponsibility of this and past administrations, But these things can be shown and exposed in public fora, peacefully and with civility, no shouting with invectives nor resorting to violence.

I like this opinion by Atty. Mel Sta. Maria. 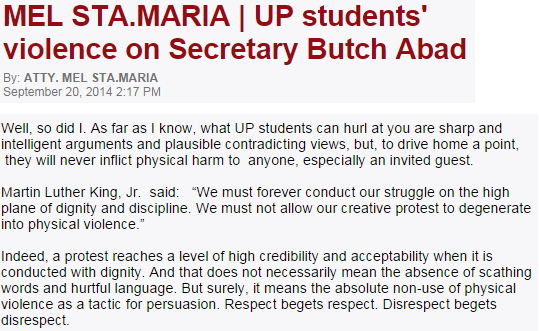 A friend, Prof. Bong Mendoza of the UP Political Science Department, tagged me his facebook comment, "Aren't violating the Constitution and hooliganism crimes? And the former is the graver crime? The much graver crime?So why is A Bad Baby crying and complaining?"
I commented that the Secretary was not "crying and complaining." It was the UPSE faculty members who issued the strong statement indirectly saying, "Hooligans, do your thing outside UP, or outside UPSE. He was formally invited, he agreed to come, treat him as a guest like you treat a guest in your house or party."

If one is invited in a forum to speak on his controversial, "politically incorrect" position, and some guys dislike his ideas and start shouting and throwing things at him, drag and punch him if possible, one would not be happy with it.

Two of Bong's friends came to defend the hooligans. I did not ask for their permission to use their comments, so I will not give their names. Nonetheless, I think  their arguments are worth posting so readers can see another side of the coin.

(1) HD said,
Abad was no ordinary "guest." He is one of the country's most powerful public officials, with apparent control over P3 trillion pesos and a huge say in how the entire apparatus of the state, which has relative monopoly over the legitimate use of violence in the country, is run. More than that, he is responsible for crafting a scheme which the Supreme Court has found unconstitutional and which many people consider undemocratic at best and immoral at worst. He is therefore accountable to the public and to the people wherever he goes.

But to use the inappropriate analogy, is it really true that we should always and everywhere treat guests with respect? Doesn't it depend on the context--on who the guest is and what he has done? Suppose, to use an analogy that is extreme but that drives home the point, Hitler or Stalin or Bin Laden or Marcos were invited to UP? Should we just bow down to them in respect and treat them like "guests"? No, we have every right, even a moral obligation, to make them feel anything but welcome.

As for being invited to a forum and then suddenly being accosted by my audience, does it not again depend on the context: on what you say during the forum or what you've done before it? If, to use another extremely analogy, I suddenly started yelling 'Kill all the Jews" or "Kill all Muslims", or for that matter if I tell outright lies misleading my audience, then I think my audience have every right--even a moral obligation--to be angry at me and denounce me. If, to use a closer analogy, before coming to the forum I orchestrated a scheme that effectively trashed democracy by usurping the power to decide how to spend hundreds of billions of people's money--then got away with it with impunity, should I really expect my audience to be nice to me or to kiss my feet?

"Why the sudden regard of UP Econ faculty on courtesy in exchange of ideas in pious solicitude with Sec. Abad? They were dead silent when then President Gloria Arroyo was mobbed by UP activists when she attended a UP workshop. Not a whimper was heard from this group when then AFP Chief of Staff Esperon was shouted out and hit with hard paper balls by UP students. What is bad for Abad is good for those they loath and dislike? Is this not selective vigilance on civility if not plain hypocrisy?"

#1 is garbage. If Sec. Butch Abad forced his way to UP saying, "I will go to UP even uninvited and lecture on those activists and if they misbehave, I have a platoon of soldiers to deal with them" with arrogance, then he deserves to be treated with arrogance.

Suppose we  replace Butch Abad as the invited guest in the UP forum that day, say it was House Speaker Belmonte, or Sen. JP Enrile or Sen. Jinggoy Estrada, or Jaime Ayala or MV Pangilinan or any other known political and business personality in the country. Some student activists do not like him even before he steps in UP grounds. Does this justify the acts of violence? 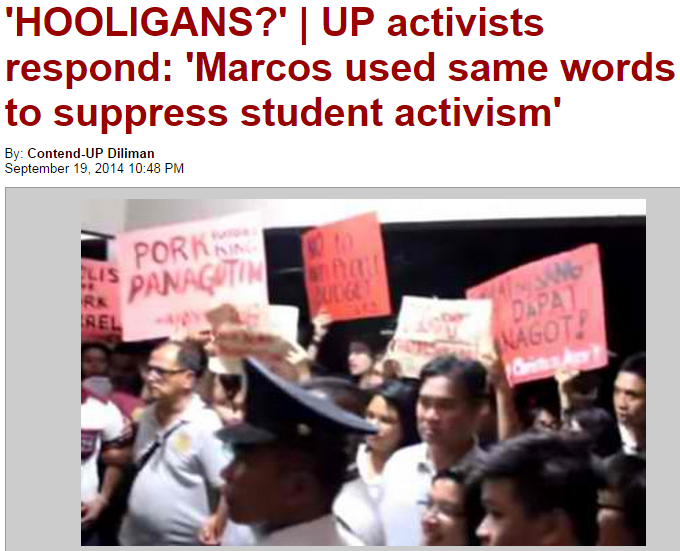 Now, see this statement justifying the UP hooligans,

That statement shows that this group Contend-UP are cowards and misguided. In the UPSE statement, the professors gave all their names, they did not say, "Faculty of UPSE" and not a single name was given. In this statement, zero name, no one is brave enough to own up to such lousy statement.

See their sloganeering, and my commments:

Uphold campus freedom! -- Yes, anyone with a brain and willing to stand by his/her statements are welcome to speak in UP.

Uphold the rights of students to protests and assemblies! -- Yes, but their "rights" do not include the right to physically attack people whom they dislike.

No to campus repression! -- Who repress whom? Any government policeman attacked and arrested any of those hooligans?

Secretary Butch Abad resign now! -- Fine, say it. Loudly, 1,000x, 1M x, but such freedom of expression does not include the "freedom" of physical aggression.

Down with bureaucrat capitalism! -- Is this the CPP above ground speaking? Very likely, yes.
Posted by Bienvenido Oplas Jr at 4:07 PM