Another round of drug price control in India.
Lessons for the Philippines?
Discussion below, after the news report.
--------- 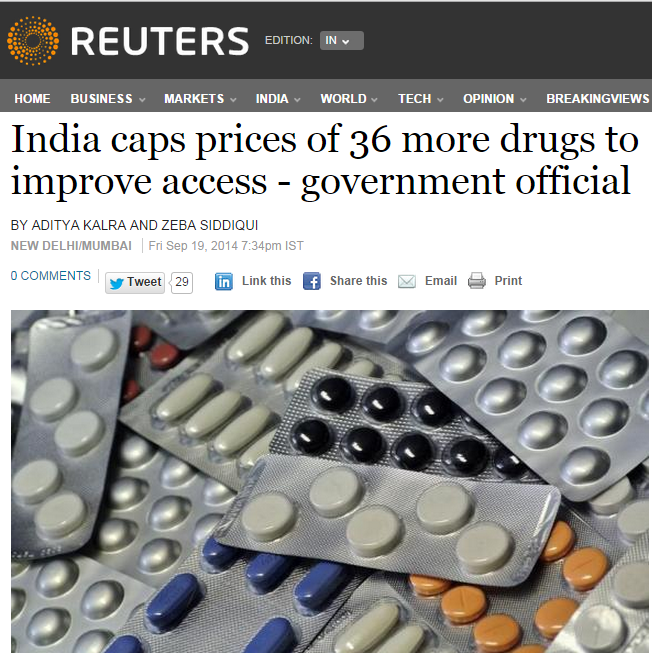 (Reuters) - India has capped the prices of 36 drugs, including those used to treat infections and diabetes, in its latest move to make essential medicines more affordable, a senior official of the country's drug pricing authority told Reuters on Friday.

The medicines join a list of 348 drugs deemed essential and that are therefore subject to price caps, covering up to 30 percent of the total medication sold in a country where less than 20 percent of people are covered by health insurance.

"This is a straight-forward, most predictable, overdue action which has been done by us," the official at the National Pharmaceutical Pricing Authority (NPPA) said, declining to be named because of the sensitivity of the matter.

Global and Indian drugmakers have been hit in India by wide-ranging government-imposed price reductions over the last year. Industry officials say prices in the country are already among the lowest in the world, but the cost of drugs is overwhelmingly covered by patients themselves.

India in July capped the prices of more than 100 drugs that are not part of the essential medicines list. The pharmaceutical industry has challenged the move in court.

Indian drugmakers, including Cipla Ltd, Ranbaxy Laboratories Ltd, and Cadila Healthcare Ltd, are among the companies that will be affected by the latest decision, research firm AIOCD Pharmasofttech AWACS said….

More big selling drugs for treatment of diseases including cancer, HIV/AIDS and cardiovascular could be brought under price cap to make them affordable in the country, said Rahul Sharma, an analyst with Mumbai-based brokerage Karvy Stock Broking.

The senior official at the pricing authority said the NPPA was drawing up a list of mass-consumed, essential life-saving drugs which it thinks should be added to the essential medicines list, but did not confirm treatments affected….
--------

What are some lesson for the Philippines from this report?

These are my impressions and observations:

Thus, people should not be enamored or hoodwinked with more government interventions  like price control and their beautiful, bleeding heart promises and justifications. Once started, they acquire their own life and create their own momentum. And such interventions will soon victimize those who asked for it in the first place, either directly or indirectly, like the proverbial "Law of unintended consequences."

2. India’s NPPA could be the “model” of former Cong. Ferjenel Biron, Sen. Manny Villar and other legislators in the last Congress when they were adamantly pushing for the creation of a permanent bureaucracy to be called Drug Price Regulation Board (DPRB). One consolation of PH drug price control experience is that we do not have a permanent bureaucracy with permanent and full time bureaucrats whose main purpose in this planet is to justify endlessly, and expand endlessly, the list of medicines to be put under price dictatorship.

A permanent price control board is very dangerous. The most extortionists, the most corrupt in  government will salivate to head it and use it for harassment and extortion of some players. Like threatening "pay us or we will put your most saleable, most popular drugs under price control". It is happening in India. The NPPA officials have gone outside the essential medicines list.

The DOH Advisory Council on the Implementation of RA 9502 (previously called the Advisory Council for Drug Price Regulation) is a non-permanent agency, just an ad-hoc body that does not even meet regularly.

Ranbaxy (or Dr. Reddy’s?) is the India version of Unilab, they are both the biggest pharma in their respective countries.

This is one reason why we do not see or hear any local generic pharma in the Philippines supporting drug price control, in 2009 or now.

What if the social health insurance provides the cap?One, the cap is meant to protect those that are insured.Two, the covered population provides predictable demandThree, it opens a group of consumers who previously are not buying.. Example,  the poor.. Or not compliant with their medication.. Example, those who have NCDs .What if those who are selling pharma products covered by SHI receives rebate?

Good questions. If the SHI like PhilHealth will provide a price cap to certain medicines that patients will pay, and the selling pharma companies receive a rebate from the SHI, then I think it  is fine. It is not a price control but a price subsidy. It is no different from a rice subsidy (NFA pays high to rice producers and consumers pay low) or MRT/LRT train subsidy (DOTC pays huge money to MRT operators and passengers pay low).

If government should impose a mandatory, forcible price cut (ie, price control), then government should pay the firms that are affected -- through DOH budget or DOF-BIR tax rebate. Government must share burden for some of its bleeding heart programs.

In the current practice of price control, neither the DOH nor the DOF share any burden. And not only for the 19 or so molecules covered by price control of August 2009, but also for the mandatory, forcible price discount of 32 percent (20% forced discount + 12% VAT waiver) for senior citizens and persons with disabilities (PWDs). Not all senior citizens and PWDs are poor that they deserve a forced discount. And not all drugstores, restaurants, bus lines, etc. are rich to shoulder the forced revenue cut. Henry Sy, Gokongwei, Lucio Tan, George Ty, Manny Villar, Sonny Belmonte, Franklin Drilon, FV Ramos, ettc. are no poor yet in the law, they deserve a forced discount and private enterprises are forced to  give them a 32 percent discount. This is a continuing headache for many players in the health sector -- pharma (local and multinational), drugstores, hospitals. Nagtuturuan who should shoulder the biggest burden and the burden inventor, the government, has zero share in the burden sharing.

Some people may ask, "You have criticized a lot of policies, what do you propose?"

Simple. Government should step back, zero  involvement, in pricing by private enterprises. Government should encourage more players and competitors to come in. Competition will drive prices, not only of medicines and vaccines but also lab tests, hospital fees, professional fees. Unless patients will deliberately go to expensive hospitals and physicians, expensive drugstores and  choose expensive  medicines.


When someone sells fake or counterfeit medicines, anesthesia, vaccines, etc.  and public health is affected, government should come in. Hard and harsh. Why? Because there is clear violation of contract, that sellers and producers should only supply good quality meds, food. It is in the promulgation of the rule of law that I believe in  BIG government. Government should over-spy, over-bureaucratize, over-penalize, criminals,, thieves and  murderers, sellers of fake medicines and adulterated food, etc.

Government should also reduce if not abolish, various taxes and fees on medicines and  vaccines. In many instances, government is a major contributor to  expensive medicines, expensive rice, expensive electricity and so on, via various taxes, charges, fees and royalties on those products and services. Yet government portrays itself as the "champion of the masses" and indirectly demonize the major players via more regulations and prohibitions, like price control policies.
----------