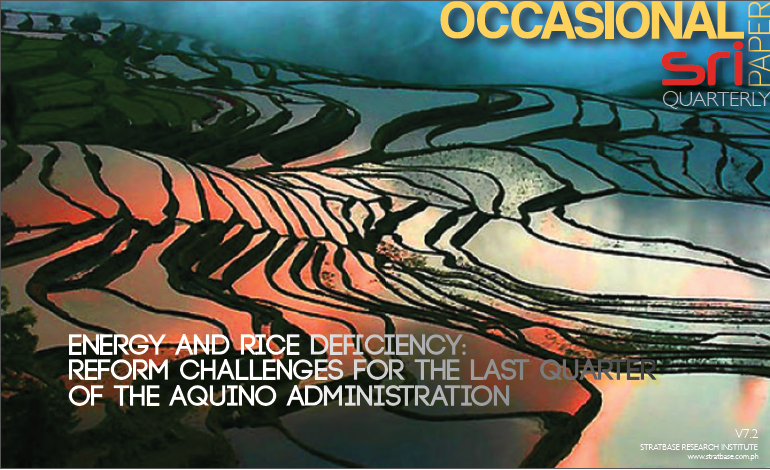 This is the 2nd part of my paper published by the Stratbase Research Institute (SRI) last April 18, 2014. The first part is about energy deficit in the Philippines. The full paper is posted in slideshare.
-----------

“…some greedy rice hoarders are stockpiling their supplies in order to sell them when prices eventually rise…. Our immediate solution: import more rice, supply it to the markets, reduce the prices and keep them at a reasonable level, and ultimately drive those who took advantage of the Filipino people into financial ruin.”

Rice protectionism via (1) National Food Authority (NFA) rice importation monopoly and (2) maintaining quantitative restrictions (QRs) of our rice imports, and (3) forcing rice "self-sufficiency" policy, are  wrong policies that contribute to expensive rice. They are anti-liberal policies that the Liberal Party should in fact discard while PNoy Aquino is still in power.

Below is a picture of how big our neighbors Vietnam and Thailand are as rice exporters. They simply have huge production relative to their  consumption. 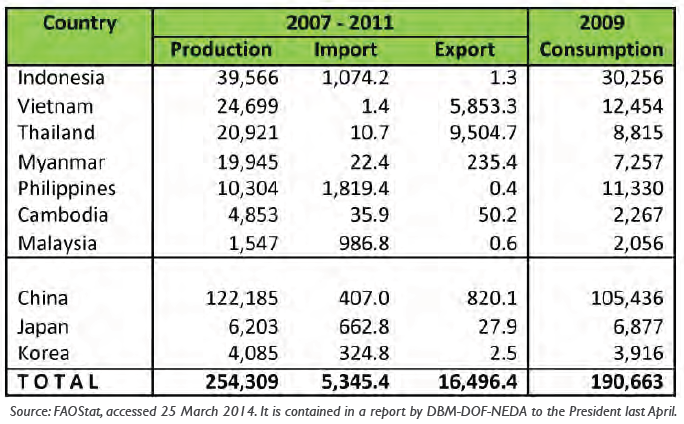 Myanmar and Cambodia are fast catching up as major rice producers and consumers, which is a good thing.

A paper from Dr. David Dawe of the Food and Agriculture Organization (UN FAO) and reposted in IRRI magazine, “Rice self-sufficiency: A question of geography?” says the answer is No. It is not coincidence. 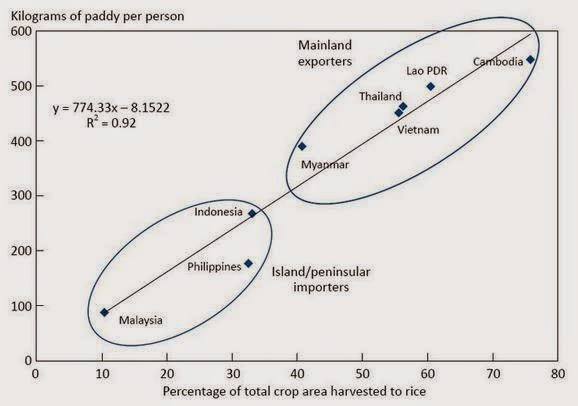 Rice land in particular,  Vietnam has almost 2x while Thailand has almost 3x that of Philippine rice land area.

Productivity wise, Filipino farmers’ is actually larger than that of their counterparts in Thailand, although lower than those in Vietnam. If Vietnam has the same number of typhoons per year as the Philippines, its productivity would possibly be similar to the Philippines. Vietnam has only about 5 typhoons a year or less, vs. the PH's 19 typhoons a year on average, about half of which make actual landfall and knock down thousands of hectares of often harvestable rice, resulting  in high crop losses.

Table 3. Rice Land and Output, Comparison among the Philippines, Thailand and Vietnam

If we combine those natural factors – being in SE Asia mainland, have huge and wide flat lands, have huge irrigation  water – those in the mainland have high rice output relative to their consumption and hence, rice prices are lower than  those in the Philippines. Why should the Philippine government insist on expensive rice via trade protectionism? 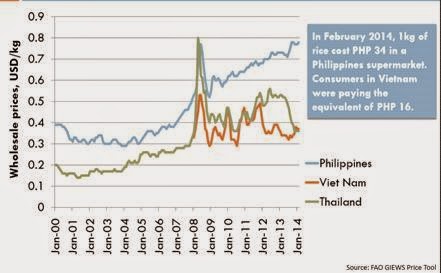 A report from PhilRice also noted this,

"According to the two PhilRice economists, domestic price of rice was up to 75% higher than average global rice prices in 2000. The gap reduced in 2008, but price differential widened again to around 30% in 2012 mainly due to higher import tariffs (of about 50% beyond quantitative restrictions quota) and higher production costs.' (source: http://oryza.com/.../philrice-calls-rice-competitiveness...)

To bring down rice prices and stabilize rice supply, the following modest proposals are advanced.

2. End the quantitative restrictions (QRs) and convert it to low tariff, ultimately leading to zero tariff, especially for rice imports from our neighbors in the ASEAN.

3. In exchange for rice trade liberalization and removing NFA import monopoly, its accumulated debt, around P155 billion,  may have to be assumed by the national  government. This means taxpayers including those who do not buy NFA rice, will pay for its debt.

4. Certain NFA assets like some warehouses should be privatized. Proceeds from such privatization should be used entirely to retire some of its debt and not be used for any old or new food subsidy programs. This way, NFA debt that  will  be passed on to  the national government and  will  be paid by taxpayers will be smaller.
----------