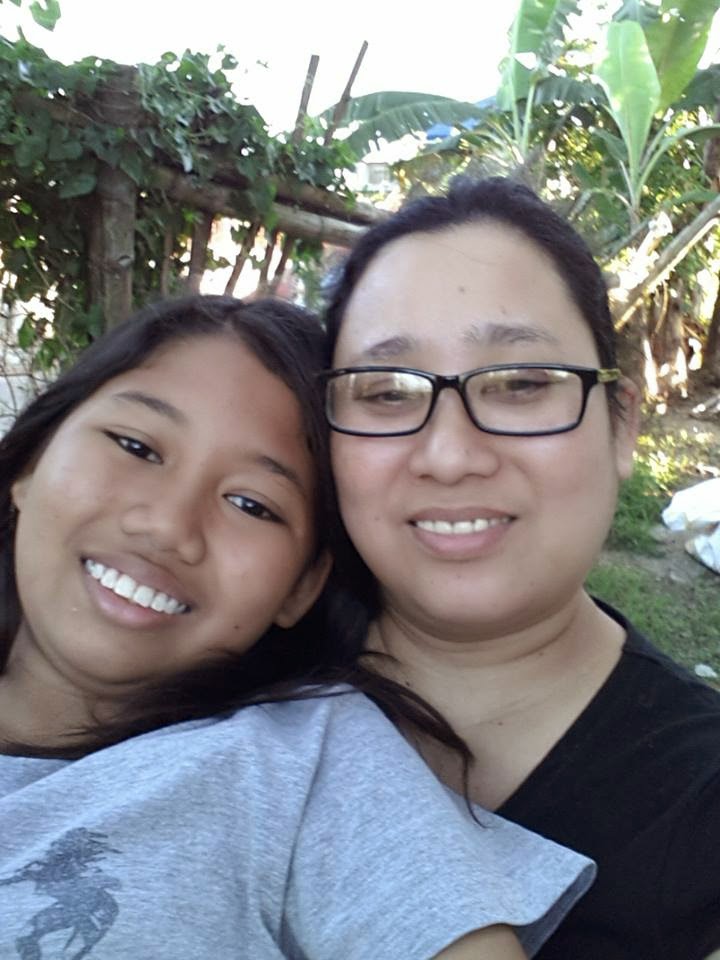 Four months after she died in Riyadh, my sister in law, a former nurse in a Saudi government hospital, is finally home in our province in Negros Occ. Welcome home, Gemma. Lois, their only child, 13 yo, with her in this photo which I took from Gemma's fb wall.

She should have been brought home last August 17 via Cathay Pacific (Riyadh-HK-Manila). But about one or two days before she would be transported, Cathay demanded a new requirement before they would transport Gemma. First they demanded an "import permit" from Manila. When I wrote to  them  what  is that “import permit” and what agency in Manila it should come from, they corrected it to "embalmer's certificate" from Saudi, etc. My brother wrote to the travel agency arranged by the Saudi hospital, to look for another airline that would not be too bureaucratic.
So the travel agency arranged for a new airline. Saudia Air took her from Riyadh to Manila direct, arrived mid-day today, then PAL for Manila-Bacolod. The plane landed in Silay-Bacolod airport before 6pm, the body was brought to Rolling Hills funeral park in Bacolod, short mass, then she was buried. Now she is back in  the  province where  she was born  and  grew up.

MANILA – The remains of a Filipina nurse who died from the Middle East Respiratory Syndrome-Corona Virus in Saudi Arabia arrived in Manila on Thursday morning.

The body of Gemma Barrilea Oplas arrived at the cargo section of Ninoy Aquino International Airport Terminal 1 past 10 a.m. It was immediately brought to Bacolod….

Special thanks again to the DFA. Riyadh PH Embassy coordinated with Saudi MOH and the hospital to finally bring her back.

Problem 1, bringing home the remains, is solved.
Problem 2, sending the benefits that the hospital would give to Gemma's family (her siblings included, based on Saudi laws and culture). This will take several weeks more...

I checked the ABS-CBN facebook page for this report, there were many comments. Mostly positive and notes of condolence, but there are some idiots who wrote negatively about Gemma, or about health OFWs in Saudi in general. Ignoring the idiots, here are some comments, mainly from Gemma’s friends:

Jan Jefri: FYI po, colleague ko po ung nsa news.. she died here in Riyadh kaso need to keep for 2-3 months freezed para macontain ung virus.. SOP po yan ng Ministry of Health dto s KSA. Pinoy nurses are highly competitive when it comes to giving nursing care to patients regardless of the disease that a patient have. Direct contact na kulang nlng mahalikan at mayakap ang mga pasyente. We took care our patients as our own family.. Yan ang risk sa profession na pinile nmin.. All we need is your prayers to all nurses all over the world.

Ang work po nmin as nurse dto is from the dirtiest to clean work..meaning all in one po.. package ika nga!!! At dyan competent mga pinoy nurses.. a million salute to you Ate Gemma, may your soul rest in peace. Youre a HERO!!!

Rest in peace ate gemma.. ur memories will remain in our hearts.. a million salute to you!!!

Ross-ana Hulleza Toroy: I would like to express my sincere condolence to the family of my friend gemma oplas.rest in peace my dear friend.
----------