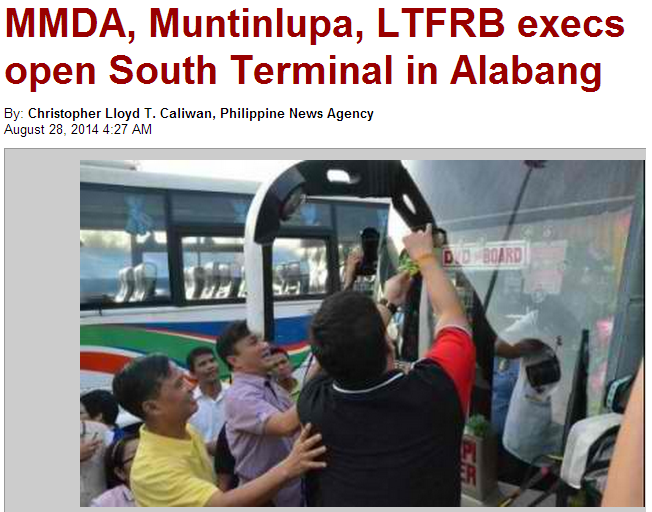 The Metropolitan Manila Development Authority (MMDA) will soon prohibit buses from southern provinces to enter Metro Manila. Their analysis says that these provincial buses contribute significantly to Metro Manila traffic; thus, the solution is to ban and prohibit them from entering the metropolis. Is this a good analysis?

In July 2013, MMDA proposed a two days a week cars-not-allowed in M.Manila, from the current one day a week. Public adverse reaction was high and MMDA was forced to abandon it.

Then in August 2013, MMDA prohibited provincial buses from Cavite and western Batangas to enter M.Manila and forced them to stop at Uniwide coastal mall, supposedly to reduce traffic in MM. I and other observers suggested that it will only worsen traffic. Many of those bus-riding probinsyanos ("promdis") are car owners, so they will be forced to bring their cars from Cavite because it is now a hassle to take multiple rides. And MM traffic has worsened. See Fat-Free Econ 45: Newton's Laws of Motion and Traffic Congestion, August 11, 2013.

Now MMDA and other government bureaucracies will prohibit buses from S. Luzon to enter MM. Expect more cars from those provinces to enter MM and traffic will worsen. The law of unintended consequences will haunt those bureaucrats, and the rest of us. And I think MMDA will revive again the previous proposal of two days a week private cars prohibited in Metro Manila from 7am to 7pm.

The MMDA, some local government units (LGUs) and Land Transport Franchising Regulatory Board (LTFRB) bureaucrats always put the blame on others, never on themselves and their policies. Many of those current bus riders from Batangas and Laguna are car owners, but they opted not to bring their cars because it is more convenient by air-con bus to go to Makati, Ortigas or Quezon City. Especially if they are carrying a luggage, or a laptop and other important materials. It is convenient to get off at Cubao then take a taxi to final destination. Now people will take provincial bus + Manila bus + taxi or jeep, then repeat the process going back home. The inconvenience of multiple transfers.

Plus many Metro buses are generally less comfortable compared to provincial buses; they also travel slower as they make many stops. And Metro bus hold-ups are a continuing scourge that the government cannot solve until now. So expect some if not many of these promdis to bring their cars to MM and traffic will become even worse.

Bureaucracies always have knee jerk reactions to problems that very often, they themselves created. Their previous regulations and prohibitions are not working, they attracted the law of unintended consequences, so they create new prohibitions. The minds of central planners. Centrally plan things; since things don't work with old plans, make new plans, new prohibitions.

Another problem, LTFRB gives franchise to bus units to ply a particular route for about five years I think. Say it gave a franchise in 2013 for buses to travel until Cubao, to last until 2018. Then this year, 2014,  LTFRB dishonors the permit it gave by supporting MMDA prohibitions. Government makes rules then change these in the middle. Officials who have little or zero experience running a public transportation yet regulating and prohibiting public transpo.
------------