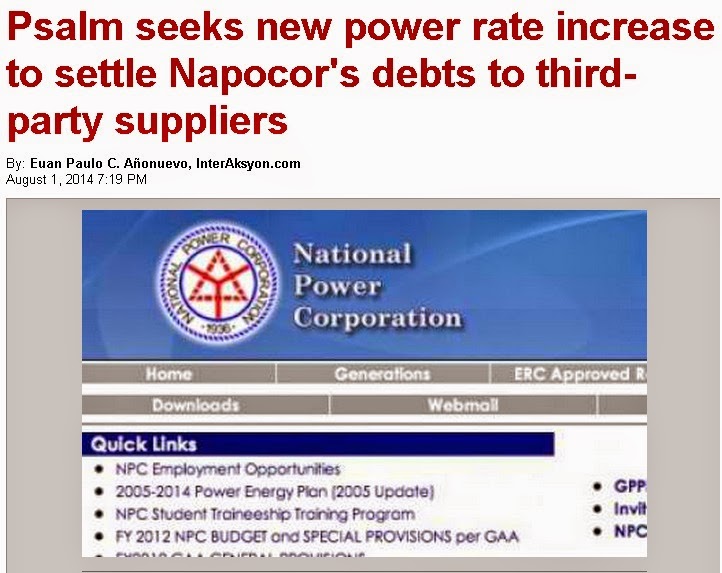 This report is confusing. It says, "Psalm said Napocor incurred stranded contract costs (SCC) amounting to P4.1 billion in 2013... Last year, Psalm proposed a P0.13 per kilowatt-hour increase in the SCC after Napocor incurred P17.69 billion in obligations from 2011 to 2012."

I checked with the National Power Corp. (NPC), it already has net income since 2012. Its 2013 net income is P500+ M. The Power Sector Assets and Liabilities Management Corp. (PSALM) is referring to old NPC loans especially during the power crisis of the early 90s when the Independent Power Producers (IPPs) put up quickie power plants that charged high just to solve the daily brownouts during that time. So those are old NPC loans transferred to PSALM, the latter borrowed money to pay those obligations. Now PSALM wants to increase the universal charges (UC) in our monthly electricity bill so it can pay those transferred debts.

Deka-dekada na ang mga utang na yon ng NPC, di pa bayad until now. That’s how big NPC debts are. I remember NPC was losing money or incurring debts something like P50 B a year in the 90s.

This should be a lesson for people who campaign for "Back to government control of power generation" and "Junk EPIRA". When government is a player, it has little or no incentive to be efficient. Their cost of operations, no matter how high or bloated, is “pre-paid” with subsidies via annual Congressional appropriations. If they get into deep s__t of debts, it’s not them that will pay but the national government (NG) or other specialized government agencies. In this case, it is NPC debt to PSALM debt. We will pay for those debts later via higher taxes, or higher electricity/utility bills.

There should also be no NG guarantees for debts by government corporations and financial institutions. If LRTA, PNCC, NFA, etc. keep borrowing as if money to pay someday will come from Batman and Spiderman, their debt should not be guaranteed. That means they must become bankrupt someday. NFA keeps piling debt until now, estimated around P155 B already. Since these are guaranteed debt by the NG, ultimately those debt will become part of DOF debt, and annual interest payment will rise even higher, very soon.

But if NG will not guarantee debts by govt corporations like NFA, PSALM, LRTA, etc., no one will lend to these state corporations. Private lenders know that these corporations are undisciplined, spend-spend-spend entities. They only know how to borrow but do not know how to pay. That is why many if not all government corporations should be privatized soon. Use the proceeds to pay many of the public debt.

Long daily brown outs in Mindanao last March-May, the main culprit is that Mindanao exempted themselves (through the politicians there) from EPIRA. All hydro power plants in Luzon were privatized and became efficient, participating at WESM. Whereas All hydro power plants in Mindanao remain in govt hands and remain not so efficient. They are also not connected to the national grid. The Mindanao power problem is not a new "crisis" that requires an “emergency power” from the President, but an annual scourge.

A friend once commented that "renewable energies (REs) are not favoured by the government." This is not true. The average generation charge of coal, nat gas, geothermal, big hydro, is around P5/kWh or less. Including the use of peak-load diesel plants during peak hours makes the generation charge around P5.50/kWh. Yet the feed in tariff (FIT) or guaranteed min. rate for solar is P9.68/kWh, wind is P8.53/kWh. The solar and wind can sell at P12 or P20 or higher if supply is tight, but the FIT is the guaranteed minimum for them, which is almost 2x the ave price of conventional power.


In addition, REs have renewable portfolio standards (RPS). If conventional power plants bid at WESM, they must bid zero or P1 so they can be dispatched by WESM. REs however, can bid at FIT level and they are assured almost 100 percent of being dispatched by WESM. The RE law of 2008 is clear favoritism of REs. Now DOE has increased the allocation for REs. Solar from 50 MW to 500 MW. Wind rose to also 250 or 500 MW.
-----------