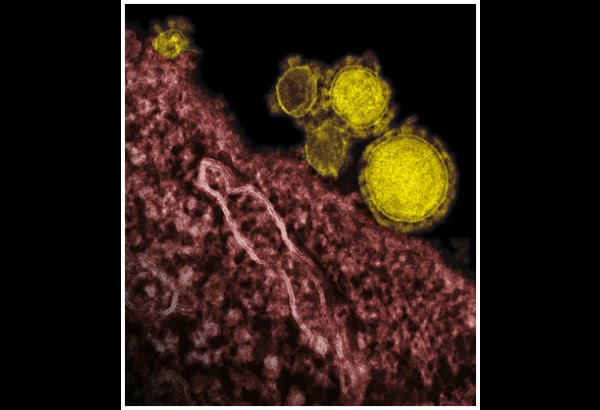 As I posted On MERS CoV and OFWs last May 08, 2014, my sister in law, Gemma B. Oplas, died last May 6, 2014 of the disease. She was an ER nurse at King Fahad Medical City (KFMC) in Riyadh, the biggest Saudi government hospital in that city. She was attending to a MERS patient, and within days, she herself was infected. Death was fast, only 6 1/2 days after she was confined.

It is now 3 months and 3 weeks since she died and her body is not flown home yet, it is still in a freezer in Riyadh. That is one of the hard travails of OFWs who died of infectious diseases abroad.

I am not aware of the science of containing viruses, but refrigeration for more than 3 months is supposed to be enough to kill any virus in the body. If cremation is only allowed in Saudi Arabia, but it's not.

Two weeks ago, KFMC and the Saudi government have decided to send home Gemma's body via Cathay Pacific cargo (Riyadh-HK-Manila) and Gemma was supposed to arrive in Manila last August 17, Sunday afternoon.

But a belated correspondence from Cathay Pacific the day before said that HK government and Cathay would require an "import permit" from my brother (in Negros Occ.) before the airline will transport the remains.

People have high stigma against this disease. Like (1) the managers of the funeral park in Cadiz City, Neg. Occ. who adviced that Gemma be cremated in Bacolod instead of being buried in Cadiz (64 kms. north of Bacolod), (2) DOH Bacolod which will not allow opening the casket and wants the body to be buried quick, (3) various airlines including Cathay, and (4) the HK government.

I went to DOH Bureau of Quarantine (BoQ) last week, August 20. I was able to talk to its Director, Dr. Mavic Vasquez. She said it is not their duty or responsibility to give a permit for incoming deceased people. They can give for outgoing ones. She thought that it should be DFA Riyadh, with Saudi Ministry of Health (MOH), that should issue such permit. A dead person here (Filipino or foreigner) that must be transported abroad for burial or autopsy or whatever purpose, the BoQ issues the permit to transport.

I called up again the DFA Office of the UnderSecretary for Migrant Workers Affairs (OUMWA). The person I spoke there wanted to call Cathay Pacific as DFA guys themselves are surprised with this new requirement. He called the Riyadh Philippine Embassy (PE) instead to inquire what the problems are. He was informed that there may be some problem with the Saudi MOH, but the PE is doing something to hasten the repatriation of Gemma's body.

Last week, I wrote to a Cathay officer and asked what exactly is the "import permit" that they require and from what agency or Department it should come from. They replied,

"...If not cremated, death Certificate + Undertakers Certificate. If death caused by communicable disease, admittance allowed only when the remains is cremated or properly embalmed and enclosed in hermetically sealed coffin."

So their earlier requirement of an "import permit" was irrelevant as the HK government wants an Undertaker's Certificate + proper enclosure in a sealed coffin. 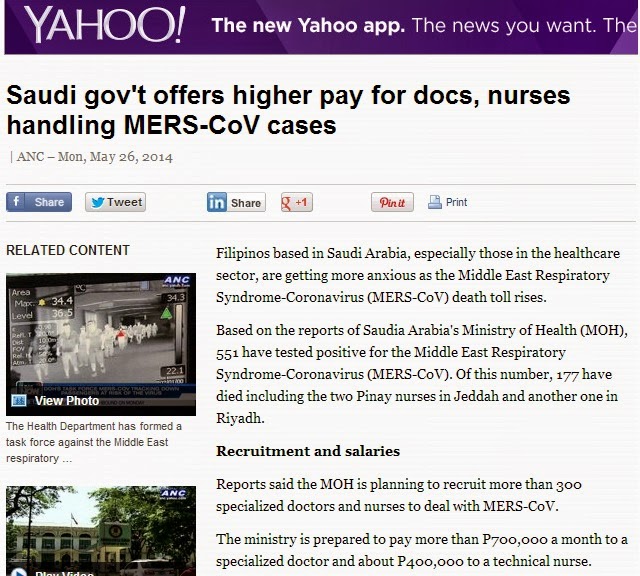 Gemma's death benefit package from the hospital is not released until now. There are some bureaucracies in the Saudi government and my brother is asking the assistance of the Riyadh PE.

All the papers for OWWA benefits, SSS, etc. cannot start unless there is a death certificate or at least Report of Death from DFA Riyadh embassy. The Report must come with the body, so the longer that the body is not repatriated, the longer will be the non-processing of said papers.


There must have been several OFW health workers who died of MERS-CoV in Saudi alone this year. Some must be there until now. It is really hard for the immediate family, like my younger brother and their only child, 13 yo Lois. to endure these uncertainties. Lots of stigma attached to this disease, but it is not the victims's fault. Gemma died in the course of her work, she was an ER nurse there. I think media alarmism and sensationalism has fanned this public stigma.

Next problem would be OFWs who died of ebola, if any, in Africa. The same public stigma, or even worse, would be attached to the victims. One reason why many Filipino relatives and family members of OFWs who died of MERS are silent. They seldom, if any, admit publicly that their kin died of that disease.

I think there are other weird stories in bringing home OFWs who died of infectious diseases, but since many of the kins here are not too open to reveal it publicly, the stories are kept in the dark. I don't think they should be ashamed to admit that their kin died of an infectious disease, especially while performing their profession. If their kin stole abroad and was shot and killed, then there is a reason to be ashamed.
Posted by Bienvenido Oplas Jr at 9:46 PM