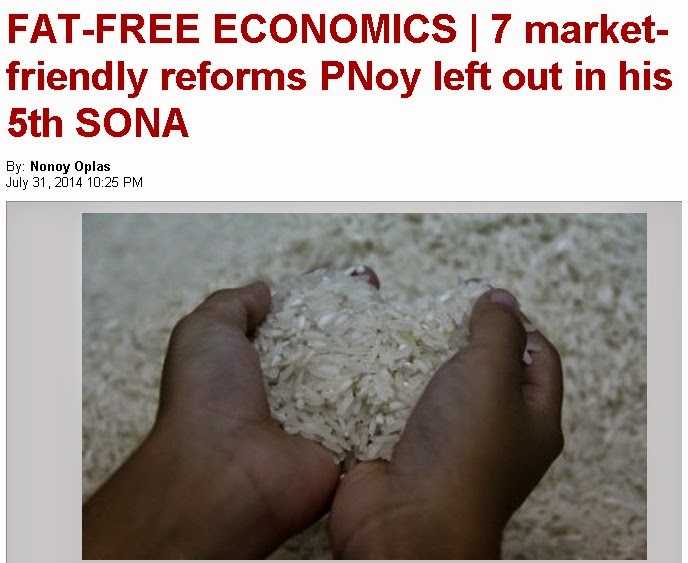 Overall, the President's State of the Nation Address (SONA) was good. More statesman-like, less combative. He mentioned several liberal and free market-leaning policies, which is good and consistent with his party affiliation. But there was also an overall hangover belief that government can do and will do almost everything for the people.

Some liberal and free market reforms that the President mentioned in his address are the following:

1. More airline competition as a result of ICAO, European Union (EU) and US Federal Aviation Authority (FAA) upgrade of Philippine aviation security. Thus, more flights between Manila on the one hand, and Europe and the US on the other can be expected

3. More competition and less monopolization in Department of Public Works and Highways (DPWH) project contracts after the removal of letter of intent in public works bidding.

5. Various infrastructure projects that will be undertaken by private developers at little or no cost to the government, such as (a) Tarlac-Pangasinan-La Union Expressway (TPLEX), (b) Metro Manila Skyway 3, (c) Kaliwa Dam, (d)  Laguna Lakeshore Expressway Dike, (e) LRT South and East extensions, (f) Busuanga Airport, and so on.

The President though made this opening statement which set the tone for the rest of his address: "It is as if you are watching two hundred TV channels at the same time. You need to understand not just what is unfolding before you—you also need to know what happened before, and where it could all lead.… you must have a response for every question, suggestion, and criticism—and you must have all the answers even before the questions are asked."

This is not so comfortable to hear because the President or the government is implying that they are playing God who knows everything and can provide answers to everything. It can be an invitation to central planning. I have no intention of attacking the President but would rather that he mentioned in his SONA, or in future speeches, things like the following.

1. More jobs were created by the private sector as the government has reduced business taxes and bureaucracies and other difficult/complicated requirements.

2. The projected power crisis starting next year can be addressed by DOE and other agencies stepping back from too many requirements and allowing more private power developers to come in with minimum restrictions and permits to submit.

3. Rice prices can go down by (a) deregulating rice importation and allowing more competition among legitimate importers and (b) reducing or removing the rice import tax of around 40 percent (previously 50 percent). The President mentioned that even rice importation, which should have been left to the private sector in a competitive environment, must remain: "This February, the NFA Council approved the importation of an additional 800,000 metric tons, in fulfilment of our buffer stocking requirement… This July as well, we approved the immediate importation of 500,000 metric tons of rice through open bidding. The NFA also has the standby authority to import an additional 500,000 metric tons to prepare for the effects of calamities on harvests and rice prices."

Government monopoly or full control of rice importation is so 80s or even early 90s, before the World Trade Organization (WTO) was created in 1996. We are stuck in a Jurassic philosophy that government must continue its rice importation monopoly. The protected groups in the government, both at NFA-DA and their accredited private importers, are the beneficiaries of this faulty policy. Rice should be as cheap as possible. If cheap rice should come from Vietnam, Thailand, Cambodia or India, so be it. Government should reduce or abolish the high import tax and abolish the NFA monopoly. The NFA can continue as a regulator but not as player and proprietor at the same time.

4. No need for a supplemental budget for 2014 to evade the DAP controversy. Additional budget request looks questionable. The total budget in 2013 was P1.88 trillion. This year, it is P2.41 trillion (P 1.61 trillion new appropriations + P 0.80 trillion automatic appropriation), or P530 B higher than last year's budget. This is not enough? Half a trillion peso increase in just one year and not yet enough?

5. Expanding the AFP’s pool of battle ships, navy cutters, jet fighters, combat choppers and other armaments, the huge resources to finance them should not come largely or entirely from additional taxes or huge borrowings, but from long-term lease or privatization of certain AFP/DND assets and properties.

6. Reforming the Bureau of Customs (BOC) and appointing officials who have more integrity is a good move. But as the ASEAN Economic Community (AEC) comes closer (more than one year to go) plus various bilateral and regional free trade agreements, the power of BOC to collect high import taxes and impose non-tariff measures that effectively discourage more international trade should be limited and restricted.

7. Extension of the no-timetable Agrarian Reform (AR) program or forced redistribution of certain private lands does not encourage early and big investments in agri-business and corporate farming. A Congressional bill of extended notice of coverage -- effectively an extended AR program -- should not prosper.


The President is a Liberal, not a socialist like Bayan Muna or Akbayan, nor a populist like the other political parties. Let us expect more liberal and market-oriented policies from him and his team in his remaining year.
------------