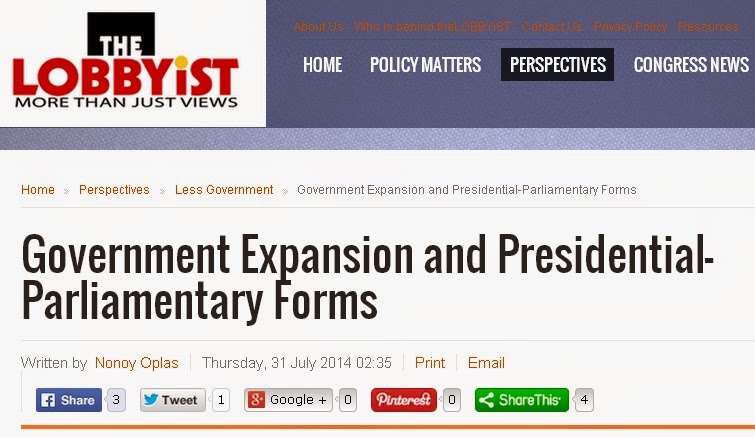 Last Monday, before President Aquino delivered his State of the Nation Address (SONA) 2014, I noted that facebook was peppered with so many anti-government, anti-PNoy posts and complaints. Was it good? Maybe yes, maybe no. But one thing is sure: Government is force and coercion. No matter how much we complain about the government or a particular administration, we are forced, coerced and arm-twisted to contribute to its annual funding via taxes, fees, fines and mandatory social contributions.

Next time, people should NOT support new programs that expand government. Like new tax hikes unless a tax cut somewhere else is made. Like a new subsidy and welfare program unless some existing subsidy programs that do not work are shrank or abolished. Or creating a new agency or bureaucracy unless an existing agency or bureaucracy is drastically shrank or abolished.

Government has three levels -- local, national and multilaterals (UN, WB, IMF, ADB, etc.). All of them share the same characteristics. Generally wasteful, tax-hungry and always saying that "things are bad, we need more taxes and subsidies to solve them." They said that 3 or 5 or more decades ago, they say it today, they will say it 2, 4 or more decades tomorrow.

There is also an observation that Filipinos are “puro angal pero walang aksyon” (all complaints, no action). Right. We should have less government responsibility, more personal and civil society responsibility. Yan ang tunay na "aksyon". But for many activists and "reform-oriented" groups, they want "more/bigger but good government".

I think they are setting the public for more deception and disappointment. When government expands, at least 50-60 percent of the total budget and funding goes to salaries alone. Plus offices and office supplies, electricity and gadgets, vehicles and fuel, travels and trainings, etc. Very little can be expected to go to the supposed beneficiaries, like actual roads. And we are not talking about corruption and robbery yet.

People who are advocating similar campaigns are selling an idea, not individuals or politicians. The idea of less government, more personal and civil society responsibility. If many people will buy that idea, the supply of politicians who will articulate that idea will come in. I doubt though that many people want more personal responsibility. Gusto ng mga tao, painom-inom, pa tambay-tambay, at hingi lahat sa gobyerno. Pag di nabigay or kulang binigay, magagalit, susuporta sa oposisyon, at uulitin panghihingi. Many civil society leaders also support this mentality. That is why they keep lobbying for "more but good government". More government, we got it. Good government, I don't know. When Marcos was kicked out in 1986, or even in several administrations before Marcos was elected in 1965, "good government" has been the battlecry of almost all groups and political parties.

Meanwhile, this news report,  PARA DI NA MAULIT DAP | Speaker seeks creation of oversight committee to examine govt spending, referring to House Speaker Sonny Belmonte is “naku naman.” The whole legislature is created by the Constitution mainly to be the oversight body of the Executive branch. Each Committee and special Committee is supposed to perform oversight function over each Department and bureau in the Executive. To create a separate committee means the other Committees will not do their oversight function seriously?

two ideas i wish to share ... first, the inherent powers of the State. With or without legislation, these powers are a given to any State otherwise, it will not function as such. In political theory, they are 3: taxation, police power and eminent domain. Second. In parliamentary systems, the Cabinet is made up of legislators (MPs or Member of Parliament) belonging to one party, the ruling party) The legislative and the executive are merged. In presidential forms, they are separate. Tripartite, which includes the judiciary. Oversight committees are de riguer in presidential forms. In parliamentary forms, government is dissolved and a new one elected. No need for oversight.

Bright contribution, I thanked Rey for it. And I agree, that is why parliamentary governments tend to expand much faster than those in presidential form. The Prime Minister can talk and debate with himself and along with key leaders of the parliament, they can discuss and quickly implement projects, which almost always are about new and expanded welfare/subsidies, and high taxes and huge borrowings to finance these endless subsidies. A really independent Legislative in a Presidential form should result in frequent gridlock between the Legislative and Executive, and this results in slow expansion of government. o minimize or even prevent such gridlock, pork barrel -- hard or soft, explicit or implicit -- is invented by the Executive, essentially a bribe to the Legislature to prevent gridlock and tolerate the wastes and fiscal irresponsibility of the Executive.

In theory, parliamentary forms work well with strong political parties which unfortunately we do not have. Parties with strong ideological underpinnings. We imported American democratic institutions hook line and sinker without the necessary basic fundamentals of party politics. The 1987 Constitution further bastardized the presidential form with the introduction of the European party list again without the basic fundamentals in place. Sad but true. That is the story of our politics in the Philippines over the past decades. Ever wonder why some are advocating for a constitutional convention to change the charter.

Personally, I like the two-party system in the Philippines before, after the adoption of the US-style constitution. The Nacionalista Party means nationalists-protectionists while the Liberal Party means globalists-free traders. Similar to the Democrat-Republican rivalry in the US. Thus, it was an ideology-based political system in the Philippines then, although many Liberals were as populists as the Nacionalistas in getting voters’ support.

Not all parliamentary systems have a cabinet consisting of MPs. In Sweden, when the prime minister is chosen, he must resign from Parliament.

There is no reason why the Philippines must choose a system whole-hog. We can mix-and-match elements of various systems, and create new elements, to build a system that fits the Philippines unique history and culture.

I would not praise the American system too highly for its partisan nature. First when the system was adopted by the Philippines the parties were not as ideological as they are now. Second the US system was designed in the 18th Century NOT to be partisan, but it became partisan anyway. Third, it became partisan not because of the elements of the US Constitution but because of the elements of the system that are NOT in the Constitution -- ballot design that include party name and allow straight party voting with a single move of the level (state and local governments decisions), restrictions on ballot access that make it difficult for independent and third-parties (state govs), primaries and caucuses (state), government funding of parties and candidates (state and federal governments)

If you want a more partisan system -- a big IF in my opinion given how parties are a source of corruption -- any or all of these changes could be adopted by a simple act of Congress. I would certainly adopt some sort of two-stage election system -- either an American-style primary, or a French- or Latin-America-style run-off system. Also reform the party list system to remove restrictions on who can run and the percentage they can win.

However, the primary reason (no pun intended) for the lack of parties is the primacy of corruption as an issue -- which is a question of character not of policy -- which drowns out all other issues. A voter will chose the more honest candidate over the candidate that has the "right" policies, a very logical choice. After all the biggest problem in the Philippines isn't the policy on the books, it is implementation. Why vote for a dishonest politician who says all the right things but will not do it? Parties differ on policy not character traits. As the history of the US showed, only when corruption is reduced (which happened with the introduction of primaries especially) will parties and policy begin to matter more.