This 2013 data does not include foreign direct investment (FDI) outflows, only inflows and thus, the net inflow is not shown. Still a useful data. 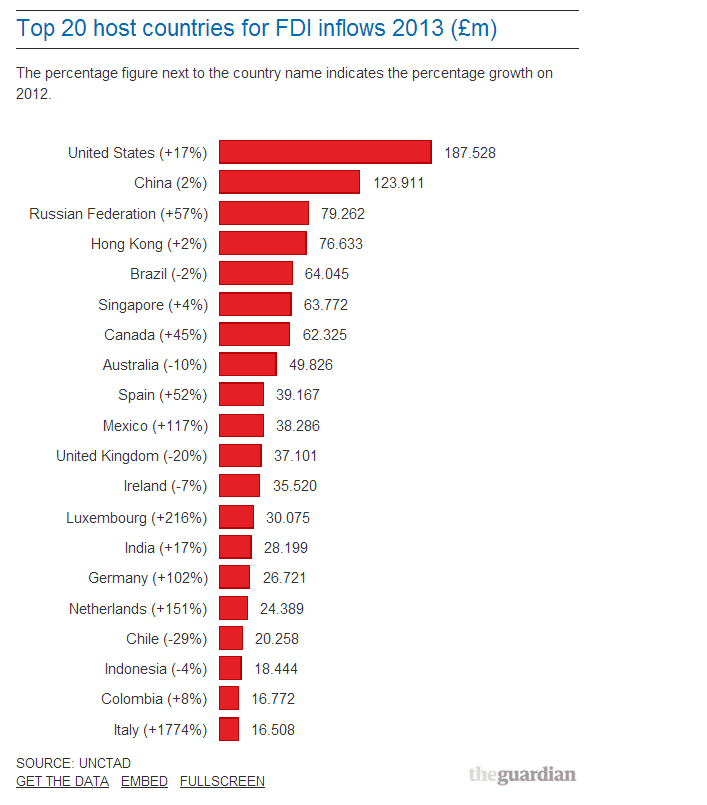 For European economies in this list, including the fiscally-unstable ones like Spain and Italy -- and note, France is not in the top 20 -- most of those FDI inflows I think are from EU members also. I am interested to see the net or balance (inflows minus outflows). In the ASEAN for instance, Malaysia has high FDI inflows but FDI outflows are also high, so net inflow is negative for 2012 and 2013. I don't remember where I saw the data. 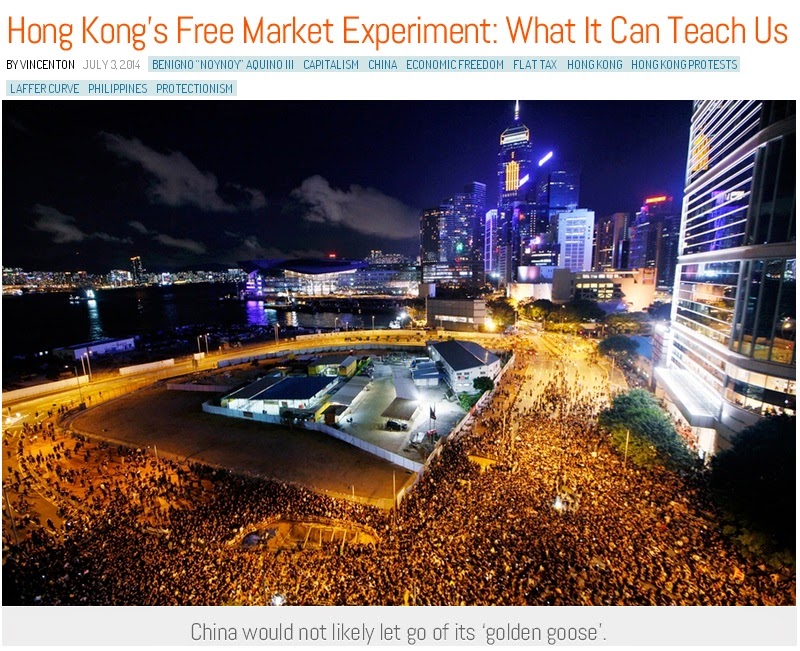 I got the above chart from The Vincenton. The article noted,

"Hong Kong is undeniably one of the greatest free market experiments in Asia. It is certainly not a 100% free market economy, but it is one of the freest, if not the freest and most capitalistic, economies in the world. Despite imposing limited restrictions and regulations (such as limited restrictions on foreign ownership of land), which technically make Hong Kong a mixed economy with a higher degree of economic freedom, the HK government has the most liberalized investment policies in Asia, enticing local and foreign investors to put up businesses and provide jobs....

About the US' high FDIs, it has a perennial trade deficit, around $1.5 billion a day on average. But it is also gaining with huge FDI inflows. High negative current account is somehow offset by positive capital account, so overall balance of payment (BOP) is not so damaging. Have to check the numbers. China should be bulging with high trade surplus but it also has high FDI outflows, buying many US companies via FDIs or portfolio investments, in US stock markets.

HK government's main revenue I think, is not from taxes, but in selling land. It is the biggest land owner, the biggest land developer. Besides, if you have a dynamic economy, lots of private investments and private enterprises, many people have jobs in the private sector, government does not need to create too many welfare and subsidy programs, nor government should hire too many people. 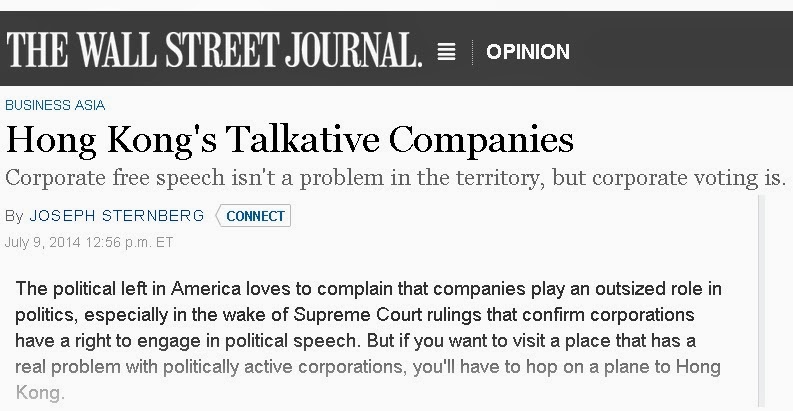 There is an interesting article in WSJ yesterday by Joe Sternberg. He wrote,

Some local companies have grown increasingly vocal in recent weeks in opposing pro-democracy activists. The Occupy Central movement—a respectable group, unlike those who camped out in Lower Manhattan a few years ago—is promising to bring gridlock to Hong Kong's central business district if Beijing doesn't follow through on its pledge to allow genuine democracy in the territory by 2017.

Many businesses are concerned about the risks and costs of business disruption if parts of Hong Kong come to a standstill. The Hong Kong offices of the Big Four accounting firms late last month took out an ad in several local newspapers warning that the protests would "shake" international confidence in the territory and could send foreign investors fleeing….

The companies err badly on the merits. If it's allowed to continue, the territory's slide into Beijing-lite authoritarianism, with the loss of rule-of-law and concomitant rising public discontent, will be far worse for business than the temporary disruptions of a public protest. But in most political systems, including Hong Kong's (for now anyway), being wrong is not a crime….

In response to the Big Four newspaper ad, an anonymous group of the firms' employees bought their own ad supporting Occupy Central. To the extent that the universal suffrage those employees support undermines the influence of functional constituencies, the accountants are arguing against their electoral self-interest. But they seem to realize that real democracy is in the political and economic best interests of all Hong Kongers, and Hong Kong's companies. It's a more enlightened view than that of their employers.


I am against street occupations because they are another form or type of coercion and massive prohibition. People's freedom to walk, pass by, do business in the affected areas are prevented  or restricted.  But I am also against permanent BIG government coercion and dictatorship, like the China communist government dictatorship. I hope the Occupy movement in HK will minimize business disruption in the business district, while sustaining the campaign to free HK from the clutches of Beijing's long distance communist intervention.
-----------

Posted by Bienvenido Oplas Jr at 11:43 AM