Telecom Modernization and the Developing World

Related to the never-say-die hypothesis that with more globalization and global capitalism, "the poor are getting poorer". This table says that hypothesis is, once again, wrong. Even the poor in poor countries like Bangladesh, Mexico, Nigeria, Philippines, India, Indonesia, China, etc. can afford to buy mobile phones. Many of them are even buying 3G and 4G phones. 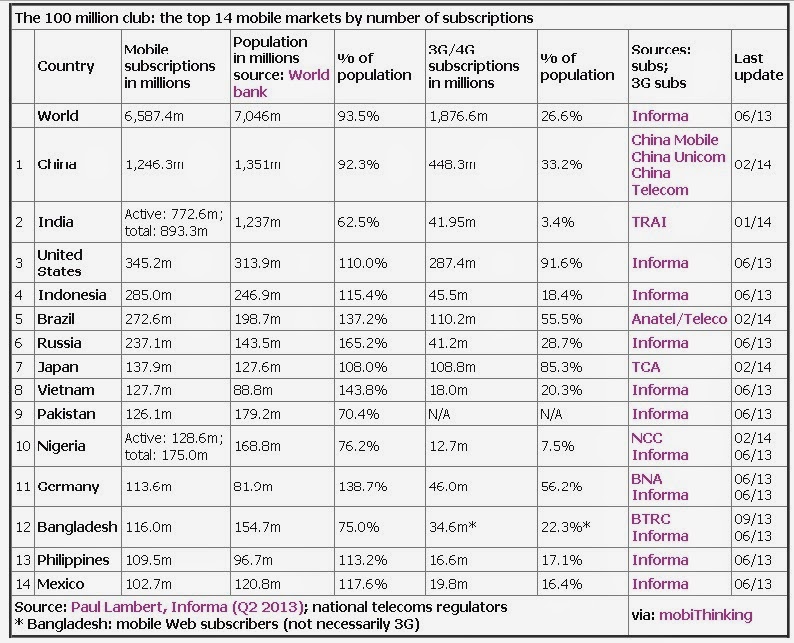 I like their title, "The 100 million club". The Philippines is one of the 14 countries in that club worldwide. The reported noted that "Iran and Egypt are knocking at the door" of the club. It further noted that

• The top 14 countries account for more than 61 percent of the world’s total mobile subscriptions.

• 29 percent of the world’s mobile users live in India and China. Subscriber numbers in either country dwarf the number of subscribers in third place USA.

And here is the overall global picture. Some 90 percent or 5.4 billion people in the developing world, have mobile phone subscriptions. Until about two to three decades ago, many middle class could not even afford to buy a mobile phone. Now even taxi drivers, bus drivers, ambulant vendors, have smart phones. 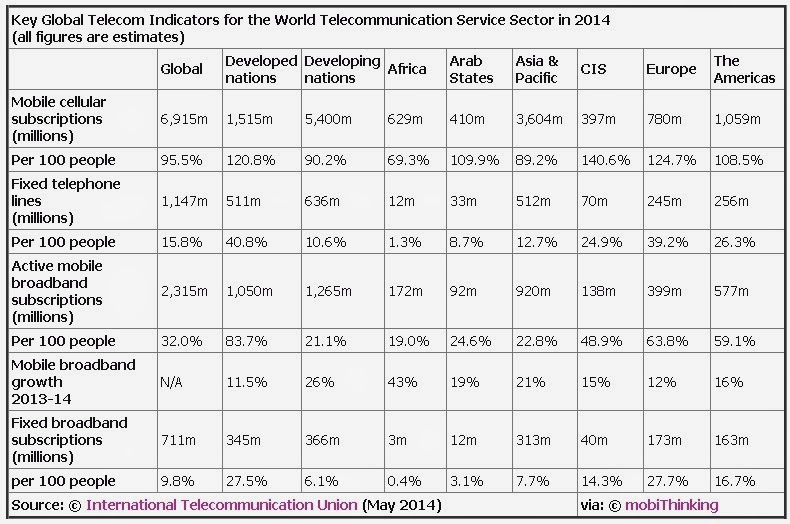 The report also noted the following:

• More than half of the world’s mobile subscribers are in Asia Pacific. With 3.6 billion subscriptions, according to the ITU, Asia Pacific accounts for 52.1 percent of the global number. This share is expected to rise – Portio estimates that Asia Pacific’s share of the mobile subscribers will be 54.3 percent in 2016. Portio also predicts that by 2016 Africa and Middle East will overtake Europe as the second largest region for mobile subscribers.


There. The anti-capitalism, anti-globalization logic is proven to be wrong again. Global capitalism works for the poor. The fierce competition among mobile phone manufacturers, among global telecom companies and related sectors or industries have forced the various players to keep churning out more products and models that cater to all segments of consumers including the poor, both in the developed and developing world. One can have a brand new smart phone now for only $50, just get the lesser known brands like Cherry or MyPhone.

Some people suggest a "smartphone vs food or education" in their household budget. I think it is not a "vs" but rather "and". Let me cite the example of our part time caretaker in our farm in Bugallon, Pangasinan. He is a tricycle driver, rice farmer, part time worker in the farm, helps his wife manage a small sari sari store, while taking care of their 2 young kids. Some of his friends or neighbors will text him and ask him to drive them to Lingayen or Dagupan or San Carlos, etc. This raises his income, thanks to texting and his mobile phone. Then he can ask by text how much are prices of dried fish in Labrador, about 20 kms away, if the price is low, he would drive there and buy various dried fishes and retail them in the barrio and that again raises his income.

That is why access to telecom and mobile phones is largely an income-enhancing experience and investment of the poor. It is a more effective poverty-fighting event than some government welfare and dole out programs.

A German friend cited the example of watching tv in the UK after tv was introduced more than a century ago. One might say watching a comedy on tv is a waste of time. but perhaps the person is sitting on a sofa watching a comedy together with wife and not going to a pub instead. He is saving money, he can spend it on other things. In addition. after tv was introduced, about two-thirds of Britain's pubs had to close, there was more in the average household kitty (usually administered by women) and drink-related violence (stabbings, etc) decreased.

Less government interventionism and regulation, more competition among players and capitalists, they are led by an "invisible hand" to serve the interests of the poor which may not be their original intention.
--------------