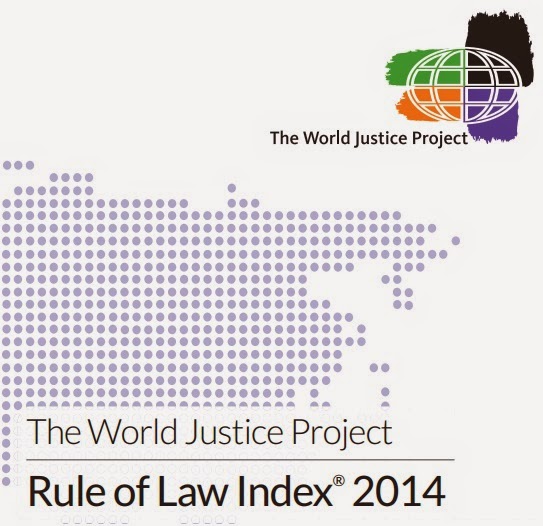 The World Justice Project (WJP) released its Rule of Law Index 2014. Nine factors were considered in constructing the RoL index:

Here is the result. I marked the East Asian economies. 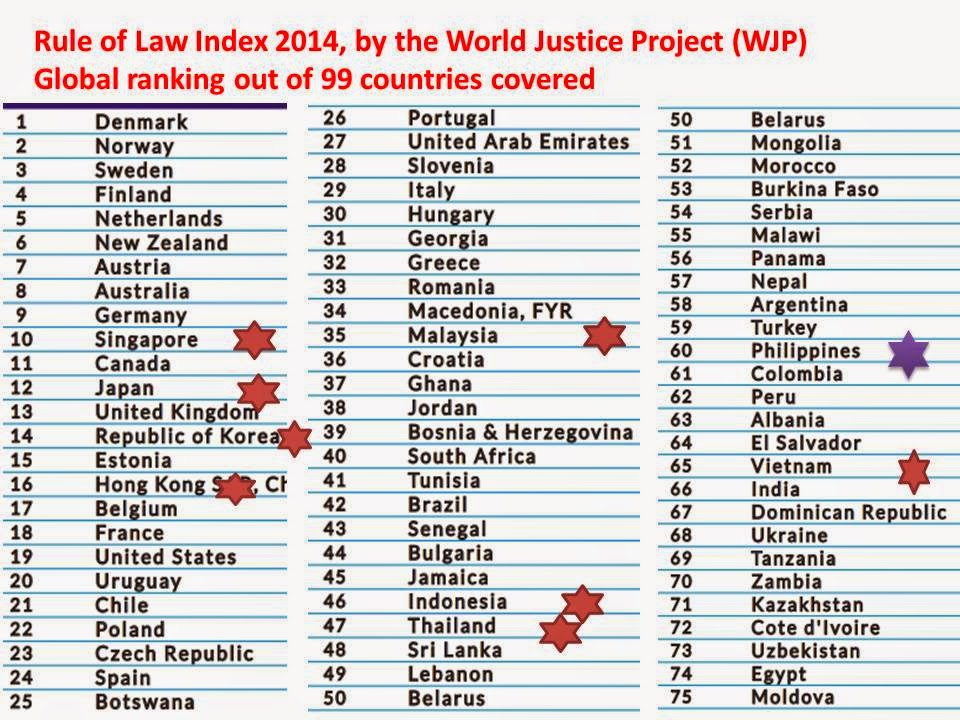 On page four, they explained the FOUR UNIVERSAL PRINCIPLES OF THE RULE OF LAW:

1. The government and its officials and agents as well as individuals and private entities are accountable under the law.

2. The laws are clear, publicized, stable, and just; are applied evenly; and protect fundamental rights, including the security of persons and property.

3. The process by which the laws are enacted, administered, and enforced is accessible, fair, and

4. Justice is delivered timely by competent, ethical, and independent representatives and neutrals who are of sufficient number, have adequate resources, and reflect the make up of the communities they serve.

While the 4 principles adopted by the WJP are generally fair and they broadly define RoL, I still prefer the Hayekian definition of RoL -- equal application of the aw to unequal people. Hayek wrote,

By ‘law’ we mean the general rules that apply equally to everybody.… As a true law should not name any particulars, so it should especially not single out any specific persons or group of persons.

I am curious why the WJP did not mention about the numerosity or high number of laws in each country, as hindrance to RoL. If one will consider national or federal laws (like Republic Acts) + state or provincial laws + city or municipal laws + village laws and ordinances. And Executive Orders, Department or Ministry Orders, Administrative Orders by Bureaus, one is talking about tens of thousands of laws and orders.

So WJP's Principle #2: "The laws are clear, publicized, stable, and just" is immediately violated by the numerosity of laws.

The numerosity of laws alienate the ordinary people, hence the need to get lawyers to understand those numerous laws and orders. And I think Hayek suggested implicity, that the number of laws shoud be as few as possible -- so that even ordinary people can understand and hence, follow those laws, orders and prohibitions.
-----------

January this year, I have a  brief discussion with a lawyer friend, Jemy Gatdula, on "Law Beyond the Courts". It is about an announcement by the University of Asia and the Pacific (UAP) here in Manila, to attract new law students.

Nonoy: Many laws and contracts are beyond the courts. I think it is a misnomer to call "law" only those that come out of the legislative mills, national or local govt legislations. If I borrow money from a friend and promise that I will pay back after X months, with or without interest, that verbal or written contract is a law. I am obliged to respect it. If I don't, my friendship will be damaged, or he may even go to court to force me to pay him back.

Jemy: exactly, Nonoy. hence the need for lawyers with a liberal education (and even international perspective). because of the policy, social, economic aspects of every matter.

Nonoy: Yes, that is why "rule of law" can apply from the micro (between friends, between couples, etc.) to the macro as a law or contract happens everywhere. The higher law, the "natural/universal law" (no killing, no stealing, no abduction,...) that applies to all societies and countries worldwide), plus the "middle level laws", those created by national legislatures, local legislatures have their own purposes. But in the observation of Friedrich Hayek, most if not all laws that come from the legislature are commands, not laws in the general and abstract sense of their universal applicability, no one is exempted and no one can grant an exemption, philosophy.
--------- 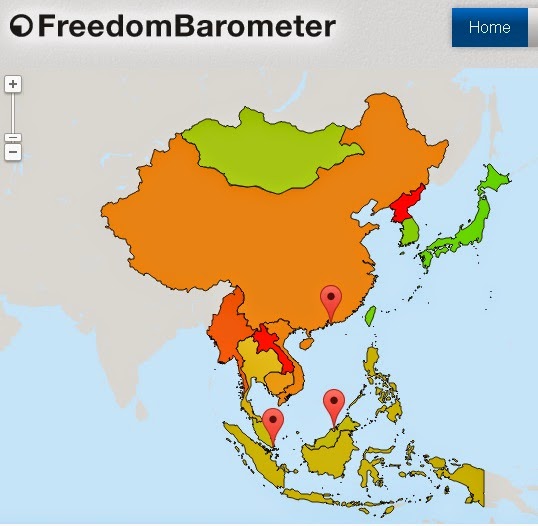 Freedom Barometer Asia also has its ranking of countries based (a) political freedom, (b) economic freedom, and (c) rule of law. To get the score or index for RoL, 3 factors were considered and the respective data sources were given:

1. Independence of the Judiciary
Data from the Economic Freedom of the World Report published by the Fraser Institute.

2. Corruption
Based on the Corruption Perceptions Index by Transparency International.

And here is the result for countries in East Asia, 2013 ranking and score: